Is there any life on Earth that does not need H2O?

Perhaps an extremophile? I think not, I found reference to one that needs an extremely small amount of water, but it still needs some.

It depends on how you define “life”. Are viruses alive? They require living cells to replicate, and all living cells require water, but I believe that viruses can survive in a kind of suspended anination for many (hundreds?) of years without any water whatsoever.

Are viruses considered “living organisms” by most biologists?

The answer is Kangaroo Rat. It will not drink water throughout its life.

However, I doubt that it exists without water from other sources; it just doesn’t drink it. That’s not what you meant, is it?

Even virus particles have water of hydration on their protein coats,

There are bacterial spores that can survive extreme dehydration, but they’re dormant - they’re not growing or reproducing.

I’ll bet even the bacterial spores have a minimal amount of water. Proteins have a tendency to unravel without hydrating water. Just ask anybody that has tried to get a crystal structure of a protein.

Well Revtim,seeing how my ex-wife qualifies as an organism the answer is “yes”. Man,…she was one dead fish.

Here … this is probably the mosthard ass extremophile.

Tardigrades are polyextremophiles and are able to survive in extreme environments that would kill almost any other animal. Some can survive temperatures of -273°C, close to absolute zero,[5] temperatures as high as 151 °C (303 °F), 1,000 times more radiation than other animals such as humans,[6] almost a century without water [7], and even the vacuum of space.[8] In September 2007, tardigrades were taken into low Earth orbit on the FOTON-M3 mission and for 10 days were exposed to the vacuum of space. After they were returned to Earth, it was discovered that many of them survived and laid eggs that hatched normally, making these the only animals shown to be able to survive the vacuum of space.[9]

And yet, I’ll bet there is still some water surviving in that organism after exposure to space.

Here … this is probably the mosthard ass extremophile.

That freaks me the hell out. If that’s feasible on earth as a niche evolution, imagine an alien ecosystem that revolves around those kinds of conditions :eek:

I for one welcome our interstellar traveling Bug Overlords :o

According to WikiAnswers,However, I doubt that it exists without water from other sources; it just doesn’t drink it. That’s not what you meant, is it?

Kangaroo rats can exist without ever imbibing water. They are capable of making all their own water from starch and sugar.

Most animals, including us humans, can’t actually gain water in this way, because the need for more oxygen means that we breath more, and we lose more moisture in our breath than the digestion provides in the first place. But kangaroo rats have some clever mechanisms to ensure that they don’t lose much moisture in their breath. So they can live out their entire adult lives without ever taking in any water.

Plenty of other small mammals can do this too, including common house ice. However for house mice this is a real knife edge existence, and they invariably die of dehydraton if fed a dessicated diet. However they will usually last several weeks or even a few months before they succumb, and after an initial weight loss their body weight stabilises for some time before it begins to fall again, which indicates that they do indeed manage to gain all their required water metabolically. The problem seems to be that they just can’t sustain it indefinitely, though nobody is sure why.

However kangaroo rats, and quite a few other desert rodents, can sustain it from the moment the are weaned until they die of old age. So in that sense these animals don’t need water.

Now if the OP is asking whether any animals contain no water, then the answer is a definite “No”.

One kind of bacterium lives in sulfuric acid and needs no air, no oxygen. 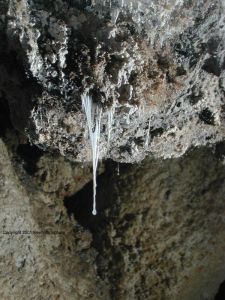 Snots can play in nature unsuspected roles. If you enter a cave, you can encounter snot chandeliers that hang from cave ceilings and coat the floors with...

I know there is an alge that lives in diesel oil.

Perhaps an extremophile? I think not, I found reference to one that needs an extremely small amount of water, but it still needs some.

Kangaroo Rats, as mentioned above, do not need to drink water. In addition, there’s a vaguely related rodent-like species native to east asia called the mogwai which don’t drink water. (In fact, water actually causes them problems). Gremlins is a 1984 American comedy horror film written by Chris Columbus and directed by Joe Dante. The story follows a young man who receives a strange creature called a mogwai as a pet, which then spawns other creatures who transform into small, destructive, evil monsters. It draws on legends of folkloric mischievous creatures that caused malfunctions — "gremlins" — in the British Royal Air Force going back to World War II. The film stars Zach Galligan and Phoebe Cates, with Howie Mandel pro...

Koala bear? I think gets its water from leaves and does not ever drink

Koala bear? I think gets its water from leaves and does not ever drink

Isn’t that the animal that eats, shoots and leaves?

One kind of bacterium lives in sulfuric acid and needs no air, no oxygen.

According to the article, the acid in question is formed from rainwater; it’s unlikely we’re talking about pure H2SO4, but rather a dilute water-based mxiture of same. It’s unclear whether the bacteria do or do not require H2O for their metabolism.

I know there is an alge that lives in diesel oil.

Algae does not live in diesel fuel..

There are bacteria that can feed on diesel fuel, but according to Wikipedia, these bacteria exist at the boundary between diesel fuel and water - which suggests that water is necessary to their metabolism.