Is there really a "Pink Tax"?

Women dress for other women, not for men.

Do you have a cite for this? I can’t wait to see it, but I reckon I should temper my expectations.

When my husband goes to buy lottery tickets, he frequently says he’s going to pay his “stupid tax”

It doesn’t matter who they dress for. Unless I guess you’re a hypocrite who snarks on other women for their fashion choices but also complains about how expensive your clothes are. Clothes and haircuts are some of the items that are hardest to find alternatives for, so women who want to save money can’t just buy the men’s equivalent of the item.

It is just hilarious to see how much intensive, very certain debate occurred in this thread before any Pink Americans showed up, or anyone even thought to specifically consult them. Totally on-brand

And you know who’s pink?

Yes, I know that Roy Harper sang the album vocals

I guess you’re ignoring the dry cleaning, auto repair, and barbershop examples, then?

I think there are three different kinds of things being talked about in this thread.

One: where the same goods are offered in higher-priced versions “for women”: essentially the same product but with different coloring or packaging, which is often literally pink. In this thread, examples of razors and Dulco Lax have been cited. This is the kind of thing I had in mind when I made the comment you were replying to.

Two: Where women are charged more than men for the same service, like auto repair. This is obviously unjust, unless it’s something harder or more expensive to provide to women than to men.

Three: The goods and services that, typically, are only or mostly bought by women (like feminine hygiene products and makeup). You yourself said

I don’t think the pink tax is about that.

Yes, Two is obviously unjust and answers the question of this thread with “Yes!”. I’m hoping the OP and others here acknowledge those clear examples.

One is trickier – women have to be savvier consumers than men and have to know to look at the men’s section for things like razors, deodorant, and so on. So, a savvy woman can get around this thing-that-isn’t-a-literal-tax, but why do they need to be savvier consumers than men? So, while this one is less clear, it’s still an additional burden – men happily buy their razors from the men’s section, and women do their research, compare prices, read articles on this subject, shop over in the men’s aisle, and can avoid the extra charge.

How about shoes? On a price per pound basis, women’s shoes seem to be way more expensive than men’s shoes. I don’t see how women put up with paying so much for them, considering how little raw materials go into them.

That sounds good- if in fact that’s what really happens. But at least sometimes, it doesn’t Here’s an article that describes a situation where the price for cleaning the exact same pink shirt depending on whether a man or a woman brought it in. If people want to charge more money for more complicated haircuts or for cleaning more elaborate shirts constructed of more delicate materials, or because a shirt is to large or small to fit on the automated presser, that’s fine.
But I’ve seen places that charge a higher price to simply trim ( not cut, no style) a woman’s long straight hair straight across the bottom than to do a more complicated man’s cut involving different clipper blades. And I’ve never seen a laundry/dry cleaner that based prices on style, size or fabric- it’s always gender on the price list

Some have said the “pink tax” goes down to toys and that toys for girls cost more than boys.

I will say All American Girls dolls are VERY pricey.

How about shoes? On a price per pound basis, women’s shoes seem to be way more expensive than men’s shoes. I don’t see how women put up with paying so much for them, considering how little raw materials go into them.

What about swimsuits? Think how little material is in a tiny bikini but they still cost quite a bit compared to just a basic mens suit.

I think the difference in the cost of clothing really muddles this. Women’s shoes and bathing suits are higher style than typical men’s, so more work goes into designing them and marketing them. You don’t normally buy clothes by the pound (except for some used place in Boston that may no longer be there). To me, these aren’t good examples of a pink tax, but I’m not the arbiter.

The expectation that women wear different looks at work every day may qualify – many men just have a set of shirts and slacks that they just cycle through, and women are expected to have more variety. On the other hand, women get away with clothing at work that men never would. Again, I think that this muddies the water, when there are clear examples of a pink not-exactly-a-tax.

No cite, but I can’t imagine this being an issue of discussion. Men like women looking good, certainly, but “mauve is the color of this season” has never been a issue with us guys. It’s women who care that “long earring are off”.

On the other hand, women get away with clothing at work that men never would. Again, I think that this muddies the water, when there are clear examples of a pink not-exactly-a-tax.

That was definitely true until some time in the 90s, when it started becoming less true. Women in theory had the option of wearing the same thing to the office and in the evening/weekends, whereas men often bought a suit just for the office. Also muddying the waters back then was that you could therefore deduct the suits but not the dresses as a business expense, (unless I’m mistaken and that was just a rumor).

Nowadays the default is often casual wear (or work from home where anything goes unless you’re on a video meeting.)

As a certifiably female person, I have found that there is a surcharge for female-marketed items, generally. I am not going to argue that it does or doesn’t exist, because you won’t find too many women who don’t know this to be the case and I don’t feel like doing the OP’s research for him. I won’t call it a tax, because that seems to get panties twisted.

I believe the underlying “logic” goes something like, everything generic is male, by definition. Humans are Mankind, except some special humans, we call them “women”. A generic box of human cleaning powder is male, but if it cleans a woman, it is Special Woman Cleaning Powder, and since it is special, it is worth more and priced commensurately. We have to make it special! We have to retool our machinery in pink!

As for haircuts, I believe they evolved separately. First, women’s hair is a sexual adornment for the benefit of the male view. Hence, it constantly changes with fashions, it is elaborately fussed with on a more-than-daily basis, it requires a Beauty Regimen. A short cut at a Beauty Salon (if they still call them that) is the lowest budget product, and still comes with a shampoo, conditioner, blow dry, and a finishing spray. Mostly men just get it cut so it looks neat and isn’t bothersome.

People who cut women’s hair go to Beautician College and also learn how to do manicures and facials as well as braiding, permanents, dyeing, bleaching, frosting, blah blah blah. This skill set evolved from ladies’ maids. Other women just braided and pinned up their hair themselves.

Barbers on the other hand, into the 19th century used to pull teeth and do minor surgery as well as shave men and cut their hair. So, a different evolutionary process.

Now that men’s and women’s hair cuts have in some ways converged, the disparity in cost becomes evident. But I don’t think it is quite the same mechanism as pink and blue razors.

That sounds good- if in fact that’s what really happens. But at least sometimes, it doesn’t Here’s an article that describes a situation where the price for cleaning the exact same pink shirt depending on whether a man or a woman brought it in. If people want to charge more money for more complicated haircuts or for cleaning more elaborate shirts constructed of more delicate materials, or because a shirt is to large or small to fit on the automated presser, that’s fine.

Great, there’s a cite. If it’s identical there’s no excuse for charging different prices. I don’t think that should be legal. It’s discrimination against a class of people. But also not in the ‘tax’ category, it’s closer to ‘crime’.

Here’s the thing- women’s razors and shaving cream are more expensive for one simple reason- women are willing to pay more for them.

Pricing rarely has much of anything to do with the product’s cost, other than the obvious notion that you have to charge more for it than it cost you to put on the shelf. Other than that, the price is generally set by what the manufacturer and retailer perceive that the market will bear. Which means that apparently women are willing to pay more money for the same shaving cream as men, but scented like tangerines and ylang-ylang, instead of whatever that barbershop scent is. And they are apparently willing to pay more for razors with a different shaped head or whatever.

There are perfectly serviceable alternatives- plenty of women can and do use razors marketed at men, or that aren’t marketed with a gender in mind (lots of disposables fall in this category). But the fact that the female-specific ones are priced higher is more of an indication that women are willing to pay more for whatever the differences are.

A lot of the “pink tax” stuff is that sort of thing- women are willing to pay more for what they perceive as stuff that works better for them, or that has a scent they prefer, or whatever.

In other cases, it might be due to the way that say… clothes are constructed. I know that my wife’s clothing often calls for delicate wash / lay flat to dry, and mine is almost always “wash warm/cool / tumble dry medium/low”. It makes my laundry much simpler when I can throw it all in and wash it, then throw it all in the dryer and fold it, versus having to figure out what washes how, and how to dry each piece of clothing. It’s possible (but I don’t know) that dry cleaning could reflect some of that- most men’s pants and shirts are pretty much the same on that, but women’s clothing might require more attention to determine the right course of action. Or it could be that cleaners just assume people think that, and charge more because they can.

I’d say the true “pink tax” is the fact that stuff like food is generally exempt from sales tax, while feminine hygiene products are subject to sales tax in something like 38 states. It’s absurd.

Do bars still have “Ladies Night” where women get free drinks?

Did you know that the reason for “Ladies’ Night” is so that the bar can have more women in it, thus attracting men to come in, spend money on drinks, and hit on the women who came in for the free drinks? In essence, bars use the lure of free drinks for women in order to have them present as targets for male patrons. 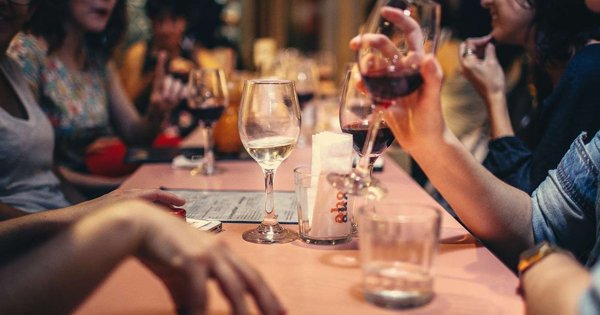 8 Things Bars Don’t Want You To Know About Ladies’ Night That Make It The...

It’s not meant for the ladies, after all.