Is this short music snippet from something classical?

and this Kai Winding track

Is it from something, or just a musical trope with no definite origin?

There was a thread a few months back where, I think, they IDed this piece via Warner Bros. cartoons, but I don’t have time to track down the thread right now.

Okay, I’ll do some searching using “warner” and “music.” If anyone has any other hints, let me know! Thanks!

Ah, I found something on it by adding Warner to my Google searches. It’s not definitively identified:

"This theme pops up whenever a character is making an exaggerating effort to sneak around (usually on tip-toe). The first four notes creep along, usually followed by some sort of rushing by the character on the long fifth note, followed by a more quick tip-toeing on the next five, faster notes. While this became became ubiquitous in cartoons, TV shows and even videogames, the exact origin of the piece is unknown. Some of the possibilities include “Mysterioso - Burglar Music 1,” a 1913 piece by silent film composer J.S. Zamecnik, or simply the undated and anonymous “Villain’s Theme” which was used for many silent films. In all likelihood, it was a piece first composed for silent films and became associated with someone (usually a villain) sneaking around.

“Its current, “canonical” form probably came about either because someone took Zamecnik’s piece, or a similar piece, and reworked it a little to avoid getting sued; or it may simply have coalesced into its current form through constant use over the years, with each use reinforcing the previous one, until it became the familiar form we all know.” 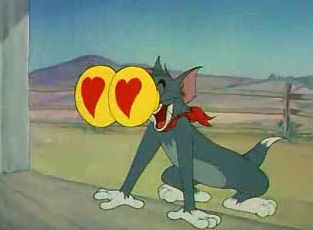 The 10 Most Common Music Cues in Nerd-Dom | Topless Robot

And pretty much everywhere else, really, but mostly old cartoons and videogames.

Kind of a fun article – covers other musical tropes, too.

The 10 Most Common Music Cues in Nerd-Dom | Topless Robot

And pretty much everywhere else, really, but mostly old cartoons and videogames.

I love the 'Dope!

Here’s a previous thread on musical tropes and riffs. It includes a bit of a discussion on the Villain’s Theme.

Inner Stickler - Thanks for searching out that thread. I’m enjoying re-reading it.