I’m not a good golfer and only play a few times a year, but I’ve played maybe 30 golf courses (I’ve moved a bit and play with friends who ask me to make up a foursome most often so don’t have a “home” course. I’ve played ratty municipal courses, mid-price private courses and tony private country clubs.

I’ve never seen anything resembling an island green like the ones I see on TV. How common are these greens. A few dozen on the type of course that host PGA/LPGA tournaments? A few hundred?

I don’t think they’re at all common in Scotland, even on championship standard courses. They would be basically impossible for anyone below upper amateur level, and that’s not the spirit of the game here.

Even on courses that the PGA plays on, they aren’t all that common, I don’t think. One sees the island green on the 17th at TPC at Sawgrass (photo below) with some frequency, because it hosts a prestigious tournament every year (The Players Championship).

Also, here’s an article from Golf Magazine on island greens, in which they interviewed several of their panelists who evaluate (and build) courses – most of them don’t even like the concept, and they have built few, if any, of them. They note that, while some golfers like the challenge of an island green, such a green tends to be excessively challenging and non-fun for all but the elite.

They also note that the island green at Sawgrass wasn’t originally supposed to be surrounded by water – the original design had it surrounded by sandtrap. 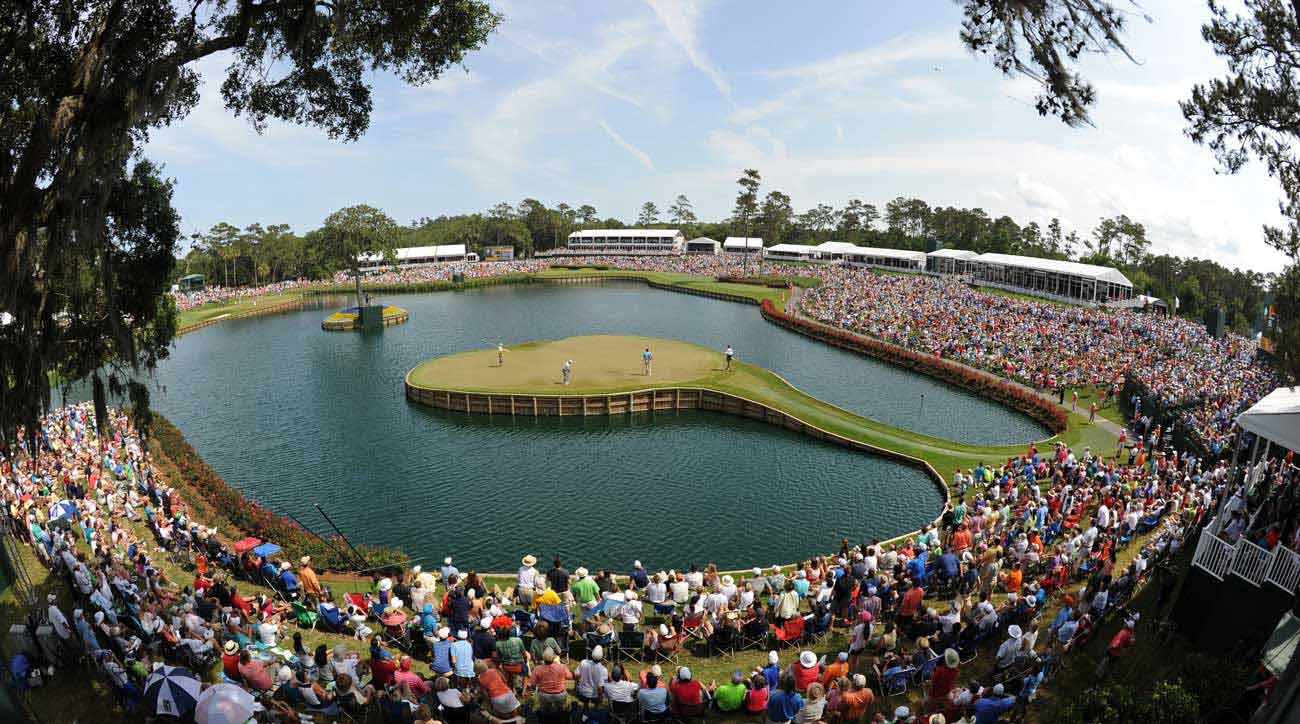 We asked our experts everything about island greens, including how difficult they are to build and when they are best included in a round.

They also note that the island green at Sawgrass wasn’t originally supposed to be surrounded by water – the original design had it surrounded by sandtrap.

Too late to edit: it looks like that may or may not have been the case, but it does appear that the hole was not originally planned to be as challenging as it wound up.

And here’s my role in Pedantic Idiot Island… 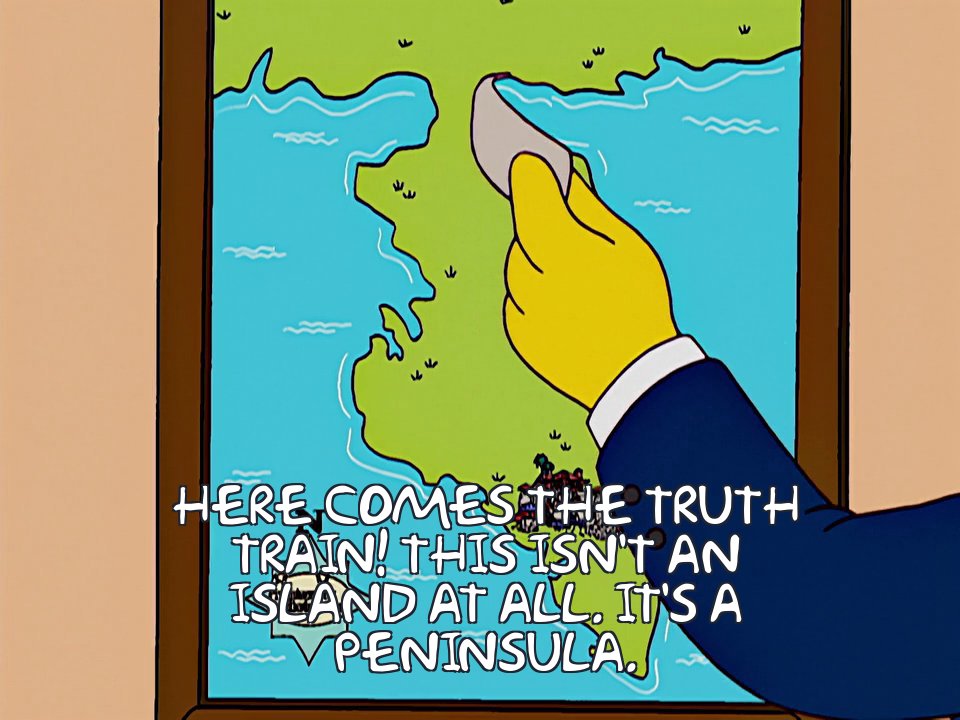 And here’s my role in Pedantic Idiot Island… 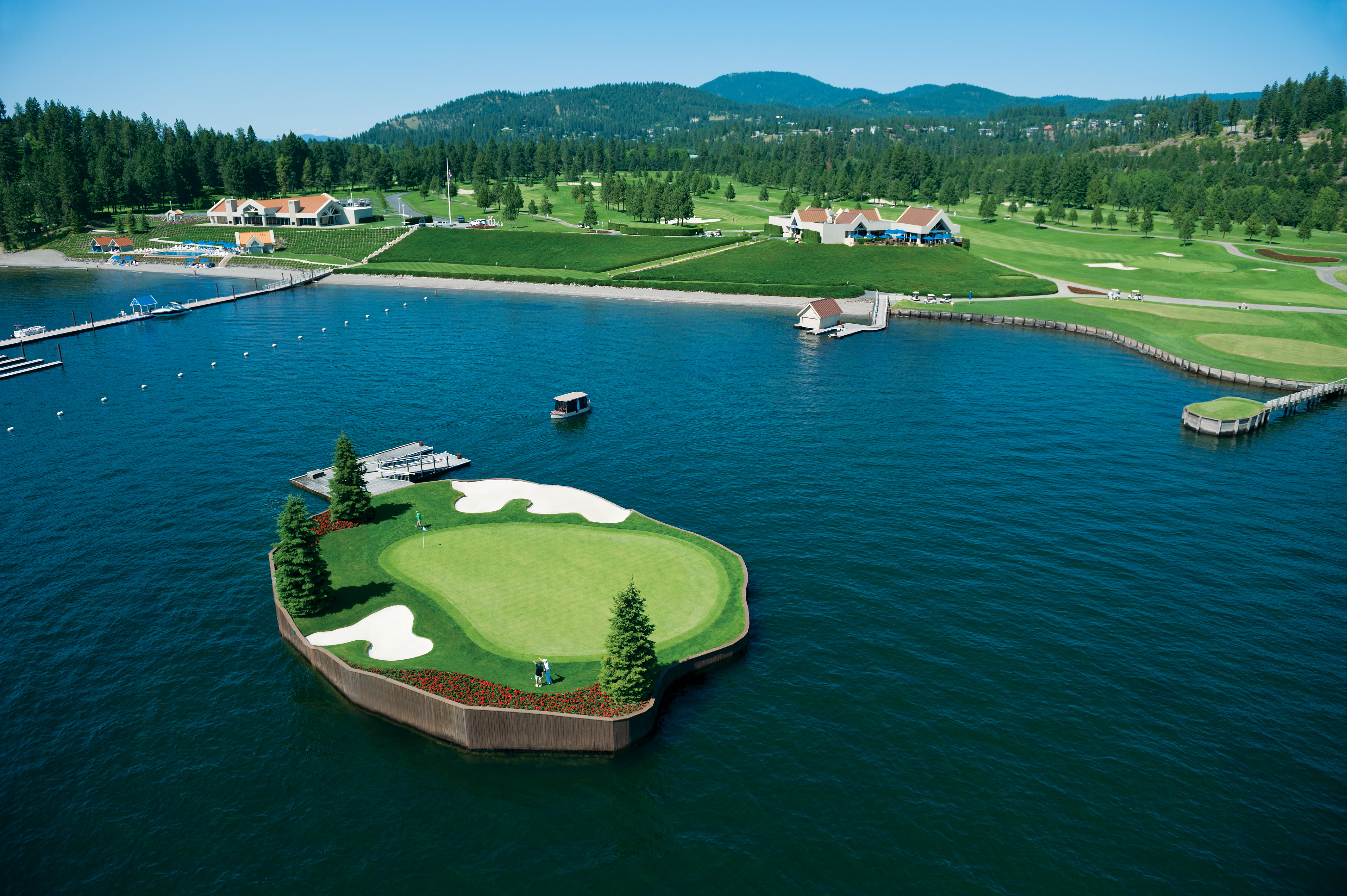 I hereby withdraw my thin excuse to post a Simpsons reference. Why do you hate fun?

Here is an account of Golf Digest’s 1986 Worst Avid Golfer Championship. Played at Sawgrass, the 17th hole, not surprisingly, features quite prominently in both text and the enclosed video.

We Found the Worst Avid Golfer!

25 years later, the chance of redemption:

This one is. [The “floating hole” at Coeur d’Alene, in Idaho.]

Identification in square brackets added by me.

I saw a documentary on that hole once. Might have been on a Discovery Channel show, though I can’t remember. Anyway, it really is a floating hole, and it has an engine room, so it can be repositioned and re-anchored every day, though it will always remain a par-3.

As I recall, most golfers try it from a mainland tee, and if they don’t make it (which happens frequently), they simply take the boat out to it (you can see the boat in the photo), and take a drop.

I take the overheated coverage of the 17th as evidence of it’s rarity. If they were more common, they wouldn’t get quite so much attention.

Reminds me of my favorite golf and fishing joke.

Two guys are on the island green off the shore of the large lake at their course. One of them looks over at two guys out on the lake in a boat fishing and says to his friend, “Look at those two idiots out there fishing in the rain!”.

The Coeur d’Alene course was always intended to be a fun resort course. Even when first opened it was never thought to be at PGA level design. I believe it’s only hosted a few regional tournaments. They want to provide a high end experience as far as service, beauty, amenities, but it was really designed to be a fun playable course for the rich amateur.

The Sapphire National course in North Carolina has one for their 15th hole. I walked past it when I was there last summer but didn’t play.

And Hole #8 has a real Golden Bell (#12 at Augusta National) homage feel to it. The angle is not quite the same and the front bunker is missing, but definitely a bit of a tribute.

Not sure there’s a quantifiable answer for the OP short of finding a comprehensive dossier of all courses and then a percentage which have islands. Doubtful any such thing would be reliable since it’s assuredly crowdsourced, but the internet has wowed me before.

I think the ultimate issue is going to come down to how one defines “island” here. It’s been joked about upthread already, but I’ve played a lot of courses that have what they’ll call an “island” hole but the reality is that they are actually more of a hunk of land with a pond in front and a ditch in the back and a path of varying width for carts. In some cases that path is as wide as the green, yet it’s still styled as an island hole.

I suspect they are very, very common in newly constructed courses if you’re willing to allow a pretty wide latitude for what qualifies.

I’ve played quite a bit of golf at a lot of courses for 50 years - tho relatively little at pricier courses. IME, “island” greens are quite rare. My assumption is that they are expensive to build and maintain. And you can get just about the same effect by having a water/sand hazard curve much of the way around the green. An island green also slows down play, w/ people trying multiple tee shots and the like.

Only 1 local public course I’ve played in the Chicago area had an island green - the old Oak Meadows #16. I haven’t played the course since it was redone, but if you look at this image you can see where the island green used to be, in the lower left corner in the bend of the river north of the new 16th green.

Several courses have par 3s w/ water in front, and sand/rough behind. Just as challenging, not as picturesque.

And you can get just about the same effect by having a water/sand hazard curve much of the way around the green.

Yeah, that’s what I was getting at with how liberal you are with your definition. I find that every newer course has one or two of these holes because they are trendy and “premium” looking, but they aren’t going to build it such that you can’t drive a mower onto it the way the most extreme examples are. If you look at any of those course’s marketing material, they sure as heck call it an island hole even if the water only surrounds 300 degrees of arc around the green.

I’ve played quite a bit of golf at a lot of courses for 50 years - tho relatively little at pricier courses. IME, “island” greens are quite rare.

I wouldn’t be suprised to learn that island* greens are now not particuarly uncommon on more upscale and challenging courses, but still fairly rare at courses geared towards casual golfers – partially due to cost, but also because, as noted upthread, an island green can be exceptionally frustrating for an average to below-average golfer.

With a more traditional “water in front” green, a golfer who isn’t confident in carrying the water can likely still get onto the green by “going around.” With an island green, there’s no option for a safer approach.

*- Yes, I know, nearly all of them are really “peninsula greens.”