Mentioned in the space exploration thread, but this deserves a thread of its own. This is truly a historic event – 25 years in the making, $10 billion in cost, involving a dozen nations on three continents, to deliver to space the most powerful telescope ever built. It’s fitting in a way that the launch was on Christmas Day, as the Webb will be able to see by far the earliest galaxies to form after the Big Bang, and will be the closest we have ever come to literally seeing the light of Creation.

At this point we have a successful delivery into earth orbit by the French Arianne launch vehicle, and confirmation that the telescope has power and all known systems are operational. It will soon be on its way to the L2 LaGrange point well beyond the moon, about a million miles from earth, and will be deploying its sun shield to keep it at extremely cold temperatures, and unfolding its massive mirror.

Truly a Christmas gift to the world. Hope everything continues to go perfectly. Some of the science that comes back in the years to come will be amazing.

My husband used to work at NASA Goddard and he was tangentially involved in this program. He did design (including shock and environmental considerations) and planning for the transport of some of the components of James Webb as they were moved around the country for testing and such. Naturally, he’s been really interested in everything involved, and at long last, it’s exciting to see it on its way!

Yeah, congratulations to all involved! I hope everything keeps on going according to plan, it is a most complex endeavour and there is still a lot that can go wrong.
Just a nitpick: watching the official NASA live stream from French Guyana I must strongly object to the choice of the interpreter who interpreted the comments of mission control into English. As a professional interpreter myself I am disappointed once again by the lack of significance conceded to languages at such a high level. They spend 10 billion on a telescope and millions on reporting etc., but sign up an amateur for relaying the words. It’s always like this, it will never change. Sigh…

The telescope has had more delays than I have friends. It is nice to know that it has survived the toughest part of its journey.

Now it has a month to travel to its L2 home. After that it will be about 6 months of getting it all ramped up. Sources are saying the first images should be coming back in the latter half of 2022. Should be amazing.

Fingers crossed. I’ve been very excited about this. I had no idea the L2 point was so far out there. Not sure how I could have missed that.

Video of the launch: 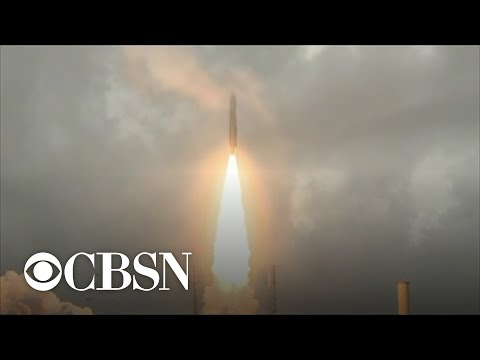 I hope all continues to go well. Looking forward to SCIENCE!

… so is that just the launch, and have they
all gone right, if not how many are left ?

So happy about this. But as Eric Berger said on Twitter there is this caveat:

For most space science missions, the majority of “risk” is retired after the launch. With the James Webb Space Telescope, only about 10 percent of the mission risk has now been retired.

so is that just the launch, and have they
all gone right, if not how many are left ?

Simply put, the observatory has been delivered – the launch vehicle has done its job (perfectly!); the observatory is in good shape, solar panels deployed and providing power. BUT … that’s it. Everything else is yet to come, and there’s lots that has to happen. It’s currently on its way to the L2 Lagrange point at just over 1.7 miles per second, a trip that will take nearly a month. Then there is six months of checkout and calibration. Among the major activities are deployment of the sun shield and, most importantly, deployment of the primary and secondary mirrors. The placement of the primary mirror segments has to be almost unbelievably accurate.

'WhereIsWebb' shows the status of Webb on its journey to L2 orbit. The page constantly updates as Webb travels, deploys, and cools to operating temperature. The most recently completed deployment step for Webb is displayed along a timeline that also...

Sun shield deployment at around Day 3.

L2 insertion complete at around Day 29.

I don’t see anything wrong with that. The launch center is operated by the French and they provided the Ariane launch vehicle, and executed the launch perfectly.

ETA: I think I misinterpreted your comment, sorry. I guess you were commenting on “NASA Launch”, whereas NASA actually did not actually perform the launch. Gotcha!

As I said earlier, the JWST is a multinational collaboration spanning at least 15 countries on three continents. The three major partners are NASA, the European Space Agency (ESA) and the Canadian Space Agency (CSA). The contributions of CSA include a highly advanced spectrograph (Near-Infrared Imager and Slitless Spectrograph – NIRISS) and a stabilizing sensor that will allow the JWST to have a stable fix on the farthest edges of the universe; both together are crucial for tasks like analyzing the atmospheric composition of distant exoplanets. There is really exciting science to come! If all goes well, this is not just a landmark gift to science, but a gift to all in the world who are curious about our universe.

It’s interesting watching the realtime status (linked previously). Its speed is slowing down, because of course it’s in an unpowered ballistic trajectory. Already down to 1.65 miles/sec, but more than 75,000 miles from earth.

Great that the launch worked, but it is just the beginning. The James Webb telescope has a wickedly complex unfurling system.

The sunshield system has 140 release mechanisms, 70 hinge assemblies, 400 pulleys, 90 cables and eight deployment motors, all of which need to perform correctly to get the five thin membranes extended, NASA officials said in an explainer video recently.

Deploying the 18 mirror segments properly will be no picnic, either. For Webb to work as planned, the surface of its mirror has to be aligned with an accuracy of 150 nanometers, Gardner said. (For perspective: A strand of human DNA is about 2.5 nanometers wide.) 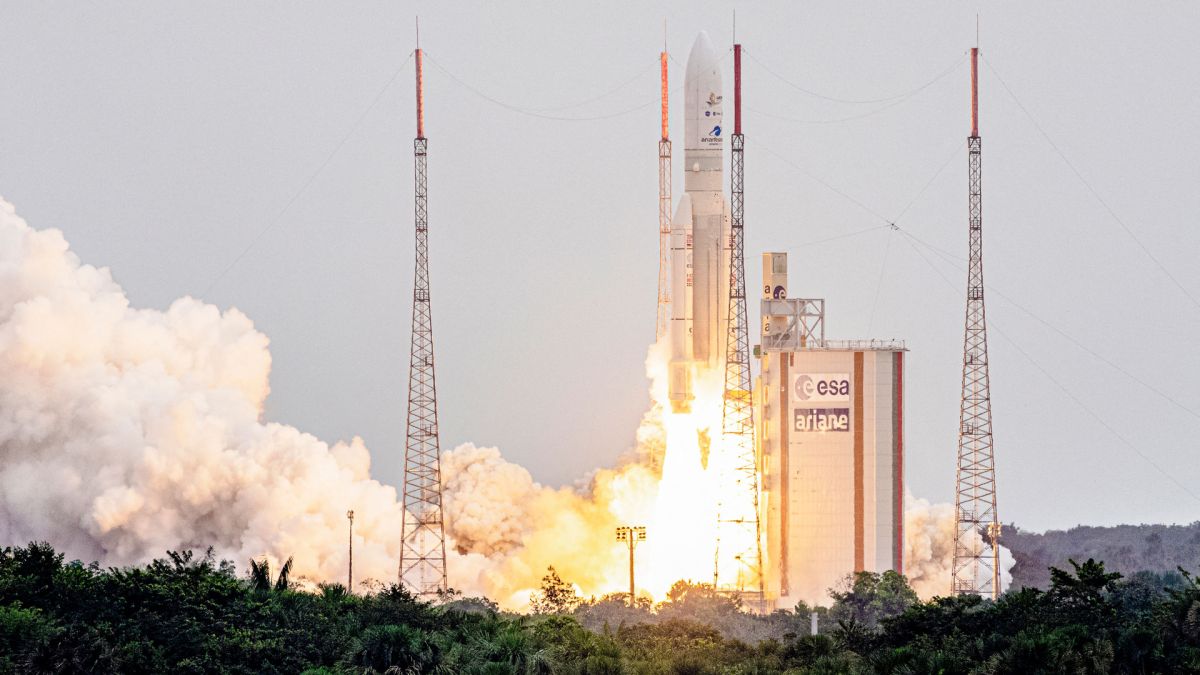 Today's liftoff was a long time coming. And on Christmas, too

Each mirror has actuators that move at about the speed of grass growing, for final alignment. I still have the feeling I had when they landed Curiosity on Mars with the skycrane - it looked like such a Rube Goldberg mechanism fhat I had serious worries right until touchdown.

And Webb has had quality issues. The last long delay came after a final shake test found nuts or screws or something on the floor of the test chamber, and the whole thing had to be inspected again.

There was a mishap during final transport where a broken strap caused an unknown amount of vibration to the whole thing, and rather than tear it down and waste another year or something, they decided it would be okay and flew without insoection, Let’s hope the vibration wasn’t out of spec.

It’s not the most powerful telescope ever made. There are ground-based telescopes that ars much bigger, and with adaptive optics even have better resolution than the JWST. What makes JWST unique is that it works in the near-infrared, which requires a space telescooe as those frequencies are filtered out by our atmosphere.

We already had a 3.5 meter infrared telescope at L2 - the Herschel telescope. It looked into the far infrared. JWST is about twice the size of Herschel, and its sunshade will keep the sensors extremely cold making it more sensitive, especially in IR.

JWST will be able to see the earliest galaxies which are invisible to Hubble because they are cosmologically red-shifted beyond Hubble’s sensitivity range. JWST will also be able to characterize some exoplanet atmospheres, which is what I am most excited about. And, it can see through dust clouds, which should help us chart our galaxy better.

And there will be serendipity. Some of Hubble’s most important discoveries were not part of the original observing plan. James Webb can see right back to the point where the universe stopped being opaque. It may also find infra-red objects we never knew existed.

Fun fact: The JWST is extremely limited in Delta-V, and there was (is) a risk that the Ariane-5 system wasn’t accurate enough to guarantee insertion into L2. If the second atage burned enough to insert into L2, the error range was such that if it burned on the high side of its error range, the JWST would sail on right through L2 and be lost forever with no ability to slow down enough.

So the plan was to burn not quite enough for L2 insertion, and let JWST use its own, much more precise thrusters to move it into its final orbit. But either way, I think there was still a small chance that even a perfectly functioning second stage might leave JWST either with not enough energy to make L2 even with its thrusters, or to blow through L2.

There are something like 37 single points of failure on JWST that must all work perfectly for it to become functional. With the launch complete, assuming its on the right trajectory, we eliminated maybe four of them. Lots of potential failure modes left. The next month or two will be nail biters.

Everybody involved must be thinking of what a useless piece of space debris Hubble was before astronauts traveled 350 miles to make a service call. One million miles is significantly outside the service area.

It’s not the most powerful telescope ever made.

First of all, thank you for all the excellent details.

Not to nitpick, but “most powerful” should be defined in terms of effectiveness. The JWST combines (a) the largest primary mirror ever deployed on a space-based telescope, (b) operation in the infrared, and (c) location at a Lagrange point such that the sun, earth, and moon are all behind it as it gazes into deep space.

This is why it’s so exciting. If everything works as it should (fingers crossed) it should deliver new and astounding science results.

That’s one of the advantages of being at L2. It’s unstable, so there’s almost no space junk there.

And there are still a lot of things that can go wrong, but not all things are equally likely to go wrong. Rockets fail a disturbingly large percentage of the time, so it’s a big sigh of relief to have that part done with. And in space, you can afford to do things slowly, which usually means more reliably.

Question: How much mathematical precision is required to compute the trajectories for things like this? In computations involving pi and trig functions, e.g., etc., how many decimal places are needed?