With four astronauts on their way to the ISS and various probes and robot explorers in situ, in transit and planned it seems we could do a with a thread to discuss humanity’s exploration of space. I know this is something I’ve been obsessed with since I was about 4 and I doubt I’m alone in that. But we don’t seem to have a thread like this.

Aside from the odd manned mission into orbit there are plenty of probes escaping earth’s gravity currently active:

This is a list of active space probes which have escaped Earth orbit. It includes lunar space probes, but does not include space probes orbiting at the Sun–Earth Lagrangian points (for these, see List of objects at Lagrangian points). A craft is deemed "active" if it is still able to transmit usable data to Earth (whether or not it can receive commands). The craft are further grouped by mission status – "en route", "mission in progress" or "mission complete" – based on their primary mission. Fo...

I’ll just play on my own then. It’s all good. At 7:27 PM EST on November 15, a SpaceX Falcon 9 rocket topped with a Crew Dragon capsule containing 4 astronauts lifted off from Kennedy Space Center’s LC-39A in Florida. The successful launch marked the beginning of a 6 month stay in space, during... Breakdown of Crew-1 Flight Plan: an inside look - SpaceFlight Insider

On Tuesday November 10, teams at SpaceX and NASA completed the final launch readiness review for the first operational mission of the SpaceX Crew Dragon spacecraft. The NASA Readiness Review board has given a “go for launch” for the Falcon 9 and the...

What’s the most interesting ongoing or upcoming mission in your opion?

There are two missions to Mars in 2021. An American and a European one. The ESA one has specifically been sent to search for signs that life once existed on Mars but I think they are going to be in competition with each other to find something which should be pretty exciting.

More promising than those, in my opinion, is the launch of the James Webb Telescope also next year. I think this is our best hope for finding life because I think it has the potential to do spectroscopy of exoplanet atmospheres. And that’s where we might start discovering some crazy stuff.

NASA have also announced they intend to send a crew to Mars by the end of 2024 including the first woman. I’m dubious about that timeline but they plan to use the Orion spacecraft so lots of the technology exists. But how will they get down and back from the moon’s surface? That one will be really interesting to watch.

But more interesting than all of these (but also potentially the most disappointing) is the Dragonfly mission to Titan in 2026. Titan is a truly fascinating place with its methane rain, lakes and rivers.

More promising than those, in my opinion, is the launch of the James Webb Telescope also next year

Concur. I’ve been waiting quite impatiently for years for the Webb to launch. It has so much potential to do new science that I can’t wait for it to be up there.

The return phase of OSIRIS REx is just underway. Not much newsworthy for about 3 years, but it’ll be very interesting to learn about what they bring back.

In terms of a firehose of data, Webb won’t be beat for decades to come. So it’ll probably be, as Hubble was, in and out of the news as long as it’s operational.

The longer it sits on the ground since conception the more worried I get that something will either prevent its launch, or kill it in orbit. It’s turned into a ridiculous amount of eggs in one already aging basket and it hasn’t even had a chance to show its stuff yet. I’m NOT suggesting it’s a boondoggle. I am suggesting we’ve taken waay too long from first twinkle in the proposer’s eye to operating in orbit. Let’s hope that unnecessaily leisurely pace doesn’t come back to haunt us

The Extremely Large Telescope opens up in Chile in 2025 - thirteen times larger than any other currently operating telescope. I guess a big space telescope is always going to be extra special but with ground based techniques to overcome atmospheric interference becoming more and more sophisticated I wonder if the JWT will be the last of its type for a long time. I’m no expert on telescopes though so I might be talking out of my ass.

The Arecibo Observatory, in Puerto Rico, is at risk of total failure. One of its auxiliary supporting cables snapped in August, inflicing a 30 meter gash in the dish, and one of the main cables broke on November 6th. It’s feared that more cables could fail before any repairs can be implemented, which could lead to a collapse of the dish. Even with improvements in ground-based telescopes, the Webb will have plenty to do. If nothing else, there’s only a finite, and fairly small, number of Really Good Telescopes (both on earth and in space): Adding one more is significant, even if it’s not the best. Heck, that even applies for old tech like the Hubble: If we were to somehow launch a dozen more exact copies of the HST, we’d still have enough good science to keep them all busy.

I knew about the Webb telescope but hadn’t bothed looking up details and head in my head it was going to be a hubble looking thing with funky folding features. Looking at wiki it is a cool looking beast. Unfortunately that lead to a wiki trek through Lagrange points, the interplanetary transport networks and ended at gravitational keyhole. I have learned gravity is awesome and I really don’t want to do my product portfolio review.

Definitely looking forward to the Europa Clipper. There’s some ongoing chaos with regard to how it gets launched: it was intended to be launched on the SLS (and in fact is Congressionally mandated to be flown on one), but there may not be one available for its launch window. The SLS would give the shortest duration travel time, but a Falcon Heavy could do the job as well with an extra gravity assist.

I am also looking forward to what the SpaceX Starship can accomplish. It will put 100 tons into LEO for cheap, and with a 9 meter diameter cargo bay. Many current missions were designed around the constraints of smaller, more expensive launch vehicles. The James Webb scope for instance is this intricate origami design so that it could fit in a standard payload fairing. Future scopes can be cheaper and simpler by targeting the capabilities and price of Starship.

Iconic Puerto Rico telescope to be dismantled amid collapse fears

The iconic Arecibo radio telescope in Puerto Rico is to be dismantled, officials announce.

Every fine machine reaches end of life. But it sure smells like Arecibo is dying for lack of budgetary interest, not for lack of ongoing & future exploratory value.

Cross-linking the two semi-current threads on the demise of Arecibo:

Seen in the movie Contact . It cannot be fixed from recent damage.

This is an ambitious effort by the Chinese: 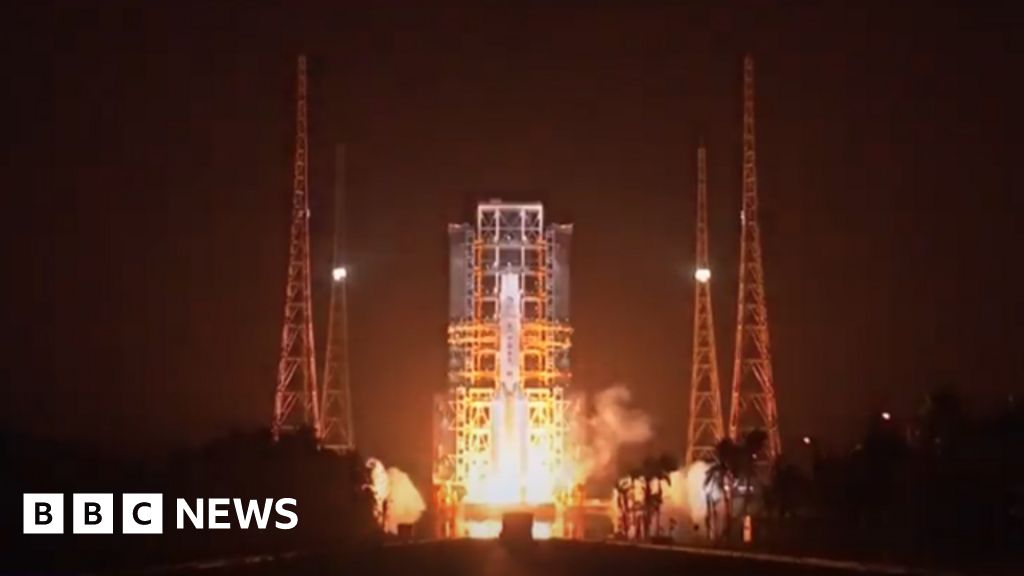 The robotic Chang'e-5 mission aims to return the first lunar rocks to Earth in more than 40 years.

This is the rocket that is going to take NASA astronauts back to the moon.

According to that BBC report, the SLS is going to launch once unmanned, followed by a manned launch. As I remember, they made SpaceX launch a whole bunch of times before they’d let them launch a manned mission. And that was just for going to the ISS. The first manned Artemis is supposed to go around the Moon.

So what’s the deal? Is it just engrained NASA prejudice against anything not invented here/commercial spacecraft? Or is the Artemis program way too aggressive due to political pressure? Or some combination of the above?

Well they can automate the launch without risking the lives of a crew so why not do that?

It looks like an extremely ambitious program (if I’m understand it right) with this unmanned mission, a moon flyby for the second mission, and a moon landing on only the third mission in 2024:

Is it just engrained NASA prejudice against anything not invented here/commercial spacecraft?

IIRC, much of the SpaceX hardware was not designed from the git-go to NASA specs for man-rated hardware. SLS was. That’s a huge difference.

Through enough work, SpaceX proved to NASA that although they did not design it using NASA specs, they did achieve the same safety levels. Part of that work was analysis conducted by NASA, and part of tht was flights conducted by SpaceX.

In aviation we are undergoing a similar revolution in regulatory approach. With some teething pains of course. Starting from immediately post WWII FAA told you how to build an airplane, not how safe it had to be. They are moving to management by safety objective vs management by design standard compliance.

Hyabusa 2 will drop off some void opals from an asteroid mining mission tomorrow which should get it to Elite status prior to its next mission heading out out to errr wait wrong thread.

Today was a rehearsal for the entire team, checking the operations up until capsule collection. These photos show the helicopter recovery. Training will continue until next morning in shifts. (Collection Team M) #Hayabusa2 #はやぶさ２ #AsteroidExplorerHayabusa2 #HAYA2Report

Well ok Hyabusa 2 is still dropping off some asteroid samples in Woomera Australia tomorrow before heading back out on a mission extension to look at some more asteroids. I guess that’s one advantage of designing with enough redundancy and margin because you absolutely have to achieve the primary mission objective, if things go well there is plenty left in the tank to go for increasingly higher risk hold my beer and watch this follow on objectives.