Joan Baez is a national treasure

This is two threads in one:
(1) Please submit nominations for the best YouTubes of Joan Baez singing.
(2) Poll Question: Is Joan Baez a splendid singer and one of the greatest living American activists?
. . . (a) Yes, (b) YES!!

In another thread, despondent Dopers invoked the ghost of the martyred union organizer Joe Hill. This reminded me of a beautiful song about this American hero, sung by Joan Baez, one of the greatest American vocalists and herself an authentic heroine. The performance is live, at the 1969 Woodstock Concert. Am I wrong to be impressed by her splendid voice? Her heroic personality? BTW, the David she refers to at the beginning of the clip is her then-husband and fellow activist, David Harris.

She didn’t just sing the songs. She marched with MLK, Jr.; led rallies; etc. She was arrested “several times” though Wikipedia only mentions two incidents.

In October 1967, the singer Joan Baez, her mother, and nearly 70 other women were arrested and incarcerated in [Alameda County, California’s] Santa Rita Jail for actions during an anti-draft rally [blocking the entrance to the Oakland Army Induction Center]. At the jail, where Baez spent eleven days (according to Baez’ memoire, she had been sentenced to 45 days, but jail officials abruptly released her early, when they received word that a press conference was being planned for her scheduled release date), she met David Harris, an anti-draft activist whom she would later marry.

In May 1989, Baez performed at a music festival in communist Czechoslovakia called Bratislavská lýra. While there, she met future Czechoslovakian president Václav Havel, whom she let carry her guitar so as to prevent his arrest by government agents. During her performance, she greeted members of Charter 77, a dissident human-rights group, which resulted in her microphone being shut off abruptly. Baez then proceeded to sing a cappella for the nearly four thousand gathered. Havel cited her as a great inspiration and influence in that country’s Velvet Revolution, the revolution in which the Soviet-dominated communist government there was overthrown.

She has led an enviable romantic life, and has been called “the only person to see both Bob Dylan and Steve Jobs naked”!

Giants walked the Earth, as recently as 1969. We’ve hardly seen their like since.

Sometime in the 70s, my dad answered the phone. It was a DJ, who was going to give him a substantial amount of money if he could identify the artist of a certain song he played. My dad, who hadn’t paid attention to pop music since Tennessee Ernie Ford, threw out the name of only singer he’d heard of since 1950 - it was Joan Baez. He didn’t win.

Some day, I’ll answer the phone and they’ll offer me a million bucks if I can identify Rappy McHiphop, and I will definitely say “Joan Baez”.

Beautiful. Utterly true and awe-inspiring. Couldn’t have said it better. Thank you!

I am maximally ecstatic every time I listen to Joan and Mimi harmonizing together. Mimi comes on at 3:10 in this video, for “Viva Mi Patria Bolivia” 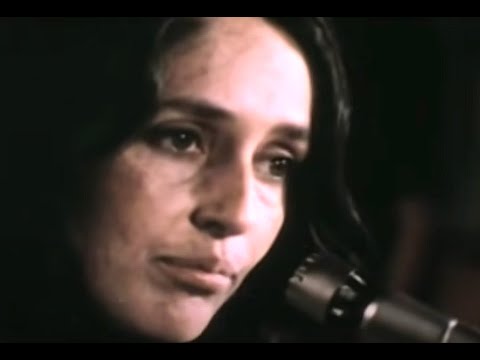 I am maximally ecstatic every time I listen to Joan and Mimi harmonizing together. Mimi comes on at 3:10 in this video, for “Viva Mi Patria Bolivia”
1973 RARE! - Joan Baez & Sister Mimi Farina Together - YouTube

IIUC that recording was made at a concert inside Sing-Sing Prison, these two great sisters following in the footsteps of another great American icon who sang for prisoners, Johnny Cash.

A few years ago I acquired a big bunch of Baez Vanguard albums at a bargain price. I’d never been a big follower, though I’d seen her play on the Dylan Rolling Thunder tour, but gosh, there’s real artistry in there.

My favorite is “In Concert”, which opens with a spine-chilling rendition of “Babe I’m Gonna Leave You”, a truly ominous song of unfathomable deepitude. It was later done by Quicksilver Messenger Service and Led Zeppelin, and I’ve no doubt this is where they got it from. Girl was what, 19?

This video is special. Joan is at home, holding her baby son Gabriel and singing with the young Randy Scruggs. I’ve set it to start when she spends a few seconds imitating Bob Dylan’s voice!

She and Judy Collins both have voices like bells, and time has barely diminished them.

And where would Leonard Cohen be without that “deedly deedly” guitar part?

My all time favourite of hers. It’s not political, it’s not heroic, it’s not grandiose, it’s just… sweet.

My all time favourite of hers. It’s not political, it’s not heroic, it’s not grandiose, it’s just… sweet.

That was her enceinte, which dates it to 1969. I instantly thought of her set at Woodstock. That song is notable for being one of the few she’s written herself. This one is much more cheery than “Diamonds and Rust.”

I went to a showing of the Woodstock movie in 1979 when I was at college in St. Louis. The theater was filled with young folks who had only heard of Woodstock’s mythic reputation, and they came primed for “ROCK ‘N’ ROLL!!!” When it started with pregnant, soft-spoken Joan Baez and her acoustic guitar, the kids were very bemused and baffled. What was this? What they had missed was that the hippie movement of the '60s was as much about folk music as rock ‘n’ roll, if not more so.

I recommend Joan’s autobiography And a Voice to Sing With—a fascinating read that puts you right there in her life and times. She’s a talented author, who knew? In this book she affirms her bisexuality, at a time when it was brave to do so in public.

I also appreciated David Hajdu’s Positively 4th Street: The Lives and Times of Joan Baez, Bob Dylan, Mimi Baez Fariña, and Richard Fariña. It’s built from many in-depth interviews of people who had known them closely. Warts and all; Mimi is the only individual who comes across as completely sweet and innocent. The book gives more space to Mimi and Richard; most of the rest of the narrative is Dylan being a jerk toward Joan, after she boosted his career, in a sort of A Star Is Born plot. Joan certainly comes across as the adult in the relationship.

The song “Bobby D” takes Joan’s side, pointing out how immature Bobby D was:

*You see, me and Bobby D don’t get along that easily
You told the world, “Skip rules, have fun”
Knocked her from here to kingdom come…

How many girls have you had today?
And how many bottles have you downed today?
While you’re on the skids, who’s minding the kids?*
And I’ve always liked this lyric:

It’s easy driving with your feet
With some good ol’ girl in the passenger seat
Watching the road all day
‘Oh honey, what funny things you do say’
But while you’re out of your head, who’s making the bed?

Here’s the acoustic version from Everything But The Girl, with a sweet harmony.

I remember the early 1960’s, when folk music was on top. Joan, Bob, Mimi and Richard were absolutely marvelous, and remain so to this day, along with some others.

Folk music is an American original, and I will follow it always.