The Mayor posted a response on Facebook, threatening to re-name the city’s sewage treatment plant after him.

On September 6, 2020, the city council accepted the offer, on the condition that Oliver be present at the ribbon-cutting.

News article on the subject, containing links to various videos of Oliver and the mayor.

What was his beef with the city?

No actual beef, it was a humorous stunt and thankfully Danbury has a sense of humor.

I don’t think it’s at all clear why he picked Danbury. I assumed he had a personal connection to the city. And he didn’t mind the suggestion of renaming the sewage treatment plant. He did mind that the mayor said it was a joke and they weren’t planning to do it. 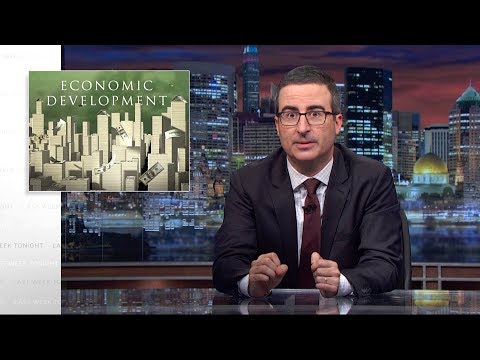 I assume since the first bit was looking for a place in Connecticut to insult they trawled their own archives first.

I don’t think it’s at all clear why he picked Danbury.

Obviously you’ve never spent any time there. If you had then it would be clear that there must be some reason even if you still can’t figure out what it is. It’s just one of those places like that.

You mean boring as hell? In that respect no different from much of the rest of the state. (Or much of the Westchester suburbs.)

I assumed his wife (who I think is American) has family there, or he and his wife have a weekend house there.

My wife’s family was from Danbury, so she’s gotten a kick out of the kerfluffle.

I haven’t spent much time there, but there’s a very nice antiquarian bookstore and I remember a diner with fantastic food.

Dave Barry had a sewage treatment plant named after him in 2002. I would link to the story but my tablet is acting up and won’t let me.

What was his beef with the city?

Just a joke. Kind of a random town that he picked to have a beef with. It sounds terrible, but is obviously all just a joke.

The origin of the beef was a report about how the private company that was hired to compile potential juror lists just happened to not include more urban areas around Hartford where the population is more racially diverse, so the juror pool ended up not reflecting the racial makeup of the area. From a bigger story about how jury pools across the country are generally whiter than the constituencies they are drawn from.

Danbury was picked as a contrast to Hartford.

I don’t watch that show but I never forgave Danbury for eliminating their country fair and turning the fairgrounds (and stock car track) into a generic mall.

You mean boring as hell? In that respect no different from much of the rest of the state. (Or much of the Westchester suburbs.)

That sums it up pretty well.

For some reason, I associate Danbury with some of the ugliest, most pointless tchotchkes ever marketed.

This week, Danbury renamed the sewage plant for John Oliver and he will visit the town at some point for the ribbon cutting.

I liked John’s protective gear for the ribbon cutting. That was pretty good, especially following an extra-depressing episode.

This week , Danbury renamed the sewage plant for John Oliver and he will visit the town at some point for the ribbon cutting.

As shown in his program yesterday, he quietly visited Danbury last week for the ribbon-cutting. My guess is this happened on Friday, since the renaming was approved on Thursday evening.

I loved the town council idiots who objected to this. Because you know, sewage treatment plants should be treated more respectfully.

You mean boring as hell?

That’s the point. The joke wouldn’t be funny if there was a reason to hate Danbury, or even a reason to THINK about Danbury. It’s much funnier if it appears as if Oliver’s “hatred” for Danbury is completely without rhyme or reason. An anonymous, milquetoast town is the perfect target.

Every town in Connecticut is an anonymous, milquetoast town. And in last night’s show, he said something to indicate that the feud with Danbury had no rhyme or reason.