Well…here we are January 2023. It’s snowing here in drought ridden Utah, I hope I remembered to close the window in the car when I got home last night…

So whatcha all readin’?

In print: The Winter People by Jennifer McMahon. Atmospheric horror with an interesting mystery.

Khadaji was one of the earlier members of SDMB, and he was well-known as a kindly person who always had something encouraging to say, particularly in the self-improvement threads. He was also a voracious, omnivorous reader, who started these threads 'way back in the Stone Age of 2005. Consequently, when he suddenly and quite unexpectedly passed away in January 2013, we decided to rename this thread in his honor and to keep his memory, if not his ghost, alive.

Old thread: Can I just forget this month happened?

Started Our Wives Under the Sea by Julia Armfield.

I was browsing the new release shelf at the library (nonfiction section) where I found Phasers on Stun!: How the Making (and Remaking) of Star Trek Changed the World. I’ve only read the TOS chapters so far, but I’m liking it.

About half way through Prancing Tiger by Philip Singerman. He’s a new to me author. A good whodunit with a large cast of interesting characters.

Been reading a lot of things

1.) West of the Sun by Edgar Pangborn. I finally got around to reading his novel Davy last year (I highly recommend it), but had never seen any of his other works until I stumbled across this. A small colonizing party (too small, I’d think, but apparently the energy requirements for transportation were too high to send more) to a distant world goes somewhat awry and the handful of colonists have to deal with some lethal wildlife and two intelligent species. Very well done, and much better than J. Holly Hunter’s The Green Planet, which I read last year, and has similarities. 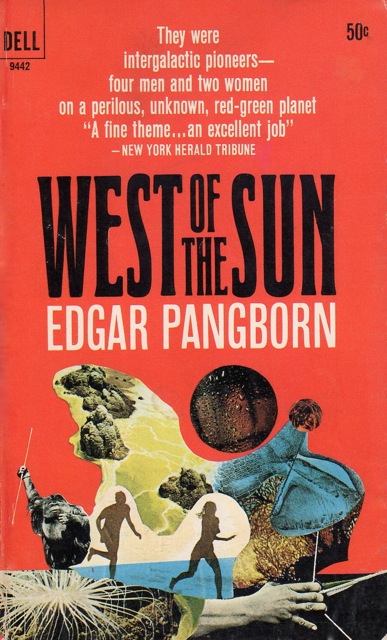 2.) Dark Money by Jane Moyer – a 2016 book about the sources of radical right funding, going into detail about the Koch brother, Scaife, Olin, and others. Not really dated, since the past ain’t changing. But it’s surprising to read a book like this today and realize that it only mentions Trump only three times.

3.) The Queen of Zamba by L. Sprague de Camp – I thought I’d read this before, but apparently not. It’s de Camp’s take on stories like Edgar Rice Burroughs’ A Princess of Mars, “done right” (i.e. – no magical teleportation, and the science is accurate). Frankly, not as interesting as Burroughs, but worth the reading. The volume also includes the related story Perpetual Motion 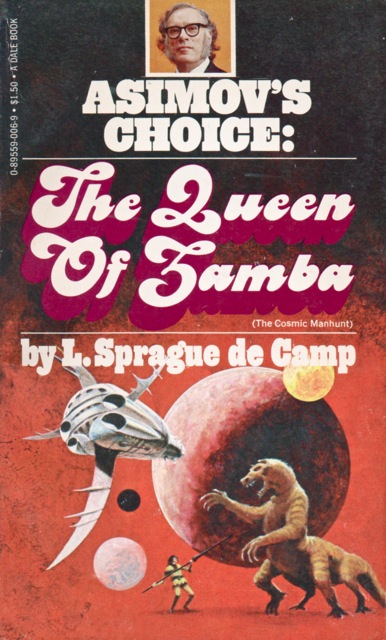 I’ve also dipped into used copies of the Loeb Classical editions of the works of Lucian and Seneca and Fitzgerald’s translation of The Odyssey to satisfy my classics jones.

For Christmas I got A Field Guide to Monsters by Dave Elliott. This is a weird little book. It’s obviously a put–together-quickly-to-make-a-few-bucks gift book devoted to monsters fro the movies, but Elliott doesn’t only include big blockbuster monsters. There are a lot of obscure monsters from cheap movies of the 1950s, 60s, amd70s that I really wouldn’t expect to find here, like Attack of the Crab Monsters, Atom Age Vampire, The Reptile, Black Scorpion, The Wasp Woman, and others, with the details and dates given correctly. But there are almost no aliens, and he includes a number of ordinary (if psycho) human beings, like Hannibal; Lector and Norman Bates. But what really gets me is that he makes a number of ludicrously blatant errors that seem inconsistent with someone who cares about the year that The Incredible Shrinking Man was released. More than once he says that creatures from Ray Harryhausen’s Clash of the Titans (1981) are from Jason and the Argonauts (1964). He misspells “Cerberus” as “Cerebus” (and illustrates it with a picture of Dioskilos from Clash of the Titans – which only has two heads, not three). He spells “Beetlejuice” and “Betelgeuse”, which is the name of the star, but not the demon (and the poster is depicted right there, with its spelling). He says the movie The Lost Boys came out in 2000, but it was 1987. I realize that I’m being a nit-picking pedant, but this is obviously a book by nit-picking pedants for nit-picking pedants. And, oh yes, the book has no copyright date on its copyright page, or anywhere else.

I’ve received as gifts or picked up or borrowed the following, for upcoming weeks

The Annotated American Gods Neil Gaiman, of course, with notes by Leslie Klinger
Second Act Trouble by Steven Suskin – a collection of musicals that bombed on Broadway. It contains Richard Rodgers’ Rex (which I saw, and which prompted a friend to loan me this), but, curiously, not Carrie.

With a Mind to Kill by Anthony Horowitz – the third James Bond book from Horowitz. He’s done a good job with the character, and is the only one since John Gardner and Raymond Benson to write at least three Bond books.

On audio I’ve been listening to:

and a number of Lincoln and Childs’ Agent Pendergast novels:

Brimstone
Dance of Death
Book of the Dead
Fever Dream
and, next up:
Cold Vengeance

These are the “Diogenes trilogy” and two of the “Helen Trilogy”, which I hadn’t read on audiodisc because my library didn’t have them, so I had to go afield to find copies.

I’ve also listed to Dirk Cussler’s latest, The Devil’s Sea, continuing the Dirk Pitt series his father started. All of these audio books (except the Sherlock Holmes) are my “Guilty Pleasures”. I know they’re ludicrously cheap fiction (if the authors don’t do something that makes you say “Oh, come ON” at least once, they haven’t done their job), but I can’t resist.

Am reading De Tocqueville’s “Democracy in America”. finding it rather hard yakka
Have completed Don Watson’s “American Journeys”. excellent
Next up is Steinbeck’s “Travels with Charley in Search of America”.looking forward to it in expectation

I’m on a theme and a mission!

I started listening to The Flight Attendant by Chris Bohjalian. I thoroughly enjoyed the HBO Max series Season 1, although I haven’t watched Season 2. The TV series was a dark comedy, but I haven’t seen any signs of comedy thus far in the novel.

2.) Dark Money by Jane Moyer – a 2016 book about the sources of radical right funding, going into detail about the Koch brother, Scaife, Olin, and others. Not really dated, since the past ain’t changing. But it’s surprising to read a book like this today and realize that it only mentions Trump only three times.

The Vorrh by B. Catling. I knew nothing going in and chose it because Alan Moore mentioned it in a Guardian interview. It’s odd as hell but I’m really enjoying it. Half way through I looked up reviews and one compared it to the Gormanghast novels of Mervyn Peake - I can see that and I loved those. I also learned it’s book 1 of 3.
Just finished -
Widespread Panic by James Ellroy - just great
Book of Night by Holly Black - good fun, supernatural noirish mystery.

Finished Our Wives Under the Sea by Julia Armfield, which was outstanding. It’s horror, which isn’t a genre I normally read much of.

I’m about a third of the way through Happy-Go-Lucky by David Sedaris, his latest collection of short stories. It’s not as funny as his older stuff, I’d say, but there are still some good laughs to be found.

I’ve also begun A Sea of Words: A Lexicon and Companion to the Complete Seafaring Tales of Patrick O’Brian by Dean King, with essays by John B. Hattendorf and J. Worth Estes. Just the thing for anyone who, like me, loves O’Brian’s Aubrey/Maturin novels.

Still making intermittent progress through Mark Z. Danielewski’s House of Leaves, a very weird, sometimes unnerving novel about a house that’s much bigger on the inside than it is on the outside, and Children of Time by Adrian Tchaikovsky, a distant-future sf novel about a terraforming project gone badly, and dangerously, awry.

Been reading a lot of things…

For Christmas I got A Field Guide to Monsters by Dave Elliott. This is a weird little book. It’s obviously a put–together-quickly-to-make-a-few-bucks gift book devoted to monsters fro the movies, but Elliott doesn’t only include big blockbuster monsters. There are a lot of obscure monsters from cheap movies of the 1950s, 60s, amd70s that I really wouldn’t expect to find here…

A much older book, and on a completely different level. I have seen it. Worth a look. It’s not a n attempt to make a quick buck on the Gift Book market.

Finished The Hurting Kind: Poems, by Ada Limon, of which the best was “Jar of Scorpions”.

Finished Find the Jinn by Maz Maddox last night. Quite a fun, bloody, weird book from the lady that brought us gay dinosaur shifters. I like the world she’s building where humans, oni, jinn, incubi, succubi, imps etc live together.

Just finished The Winter People by Jennifer McMahon. Really good, but like Dung Beetle I didn’t really like the ending. It was terribly anti climatic.

The “well we’ve inherited a monster” moral isn’t terribly satisfying and neither really was all the running around in the cave system where the only encounter with the monster was off screen.

Ha! I was kind of freaking out because I looked up The Winter People and couldn’t remember a thing about it. Then I saw that I read it in 2014! Well, no wonder. I was just a child then…

Ah, but I was so much older then
I’m younger than that now

Finished The Kaiju Preservation Society this morning, a fine start to the new year. Funny and nice and happy. Probably my favorite part was when a lucrative and mysterious new career is gifted out of nowhere, I wish that would happen to me.

Currently I’m reading Home to Stay!, a giant coffee-table sort of book. It’s the Ray Bradbury stories which were adapted for EC Comics. It’s all right but I doubt I’ll actually finish it.

Probably my favorite part was when a lucrative and mysterious new career is gifted out of nowhere, I wish that would happen to me.

Seriously! I could be a grunt if it involved kaiju!