I volunteered to bring the dessert for a party my mom’s having. It has a New Orleans/Mardi Gras theme, so I thought I’d make a King Cake. Does anybody have a favorite recipe for one? I found some on the web, but not knowing how it’s even supposed to taste, I’m having a hard time picking a recipe. How many cakes would I need for about 21 women?

It’s basically a yeast cake dough. I made mine filled with a cream cheese filling and it was really good. this recipe looks much like the one I used, except I used an 8 oz package of cream cheese mixed with about 1/4 cup sugar to fill the cake. You could also add some jam with the cream cheese. The recipe I linked to says it serves 12.

Thanks, CubMistress! If you get a chance - did you use the cream cheese in addition to the cinnamon filling, or instead of?

I hope this isn’t too late. I used the cream cheese instead of the cinnamon filling. Let us know how it turns out.

Where would a person pick up a baby for their King Cake?

I found them at WalMart, in the Wilton cake decorating supplies area. The baby was plastic but it worked just fine. Traditionally, you can also use a coin or a dry bean.

I found them at WalMart, in the Wilton cake decorating supplies area. The baby was plastic but it worked just fine. Traditionally, you can also use a coin or a dry bean.

Thanks. I’ll have to check WallyMart today. No WAY would a bean cut it!

I found tiny plastic cupids at an art supply store. I just really hope nobody chokes on them!

Your recipe is the easiest and quickest I’ve found, Cub Mistress (well okay, except for the one that uses Pillsbury canned sweet rolls as a base, lol) - thanks so much!

I will be back to report after tomorrow :).

Update! First of all the party was this weekend, not last, so sorry for the delay. Since the recipe made 2 cakes, I made one with creamcheese, a la Cubmistress and the other with cinnamon & brown sugar like the original recipe. I confess I liked the cinnamon better, but it may have been because I didn’t use enough cream cheese in the other one and it was neufchatel (it just sort of soaked it up.) Here’s a pic of the finished products: 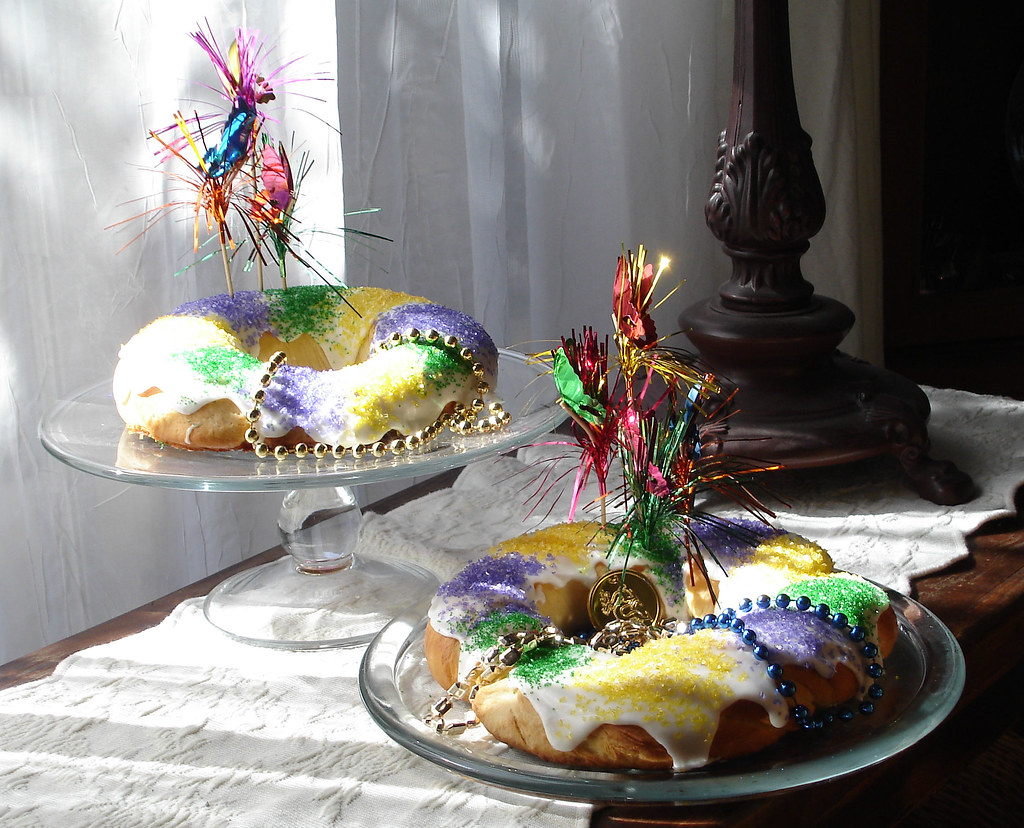 I put little cupids in them for babies.
Thanks so much for the recipe, Cubmistress, it definitely added a festive touch to the proceedings

I think the secret to a good King Cake is putting LOTS of filling in. Cinnamon. Cream Cheese. Lemon. Almond…I’ve made them from scratch several times (all the dough recipes are basically the same) and they all tasted identical to the cheapie version at any grocery store.

How heartbreaking, salinqmind! That’s pretty labor-intensive for something you could buy at the store! I haven’t seen any in stores in San Diego, so if I wanted one, I had to make it…:p:)

I found the baby Jesus in the king cake a buddy of mine brought back from New Orleans. I thought it meant I was just going to have a lucky year, but another friend said it means I have to host next year’s party. Anybody know the straight dope?

Sorry, Devil’s Granny, from what I’ve heard, your friend is right. The person who gets the baby either hosts the next party or brings the next cake.

We were nicer at our party: they got a prize. I figured it was a bribe in case they chipped a tooth on it :D.

Yeah, you have to either host next year’s party or bring the cake.

Jellyblue, those look absolutely professional! I bet they tasted as good as they look! Nice job.

Hey, those cakes look fantastic! I’m glad I was able to help you with a recipe.

The secret to cream cheese filling is to use a lot of it, just like salinqmind said. For cakes that sixe, I’d guess a pound of cream cheese.

Sorry, Devil’s Granny, from what I’ve heard, your friend is right. The person who gets the baby either hosts the next party or brings the next cake.

Bugger, but thanks for the info.
Well then I guess I’ll print out the recipe and hope I can find it again next year. I pinned the baby Jesus to my cubicle wall so hopefully I won’t forget.