Why the LEDs around the cooling fans?

Because it looks cool (for people who like that thing).

I guess so. It may cost $50 less without them, though.

Because it looks cool (for people who like that thing).

Yup. A friend of mine recently built her own gaming computer; she put in the RGB LEDs for that very reason.

Well, they can get the hell off my lawn!

I had a lot of options when I was building my current machine and you know I went with the dumb fancy glass lit-up case and fans because the price difference on those items is fairly negligible when considering the rest of it is still costing me close to $2k, and I figure if I’m already spending that kind of money for performance, I think it should look cool. It’s essentially a luxury item to me, so I think of it the same way as if I were buying a sports car.

I bought a new PC build about 6 months ago that came with the fan lights. I didn’t really have much use for the rotating rainbow colors as-is, so I found in the settings a ‘smart’ setting that controls the color according to the CPU temp. It turned pretty but useless eye candy into a genuinely useful feature. You can even set the temp range, so I set it to be green up to 50C, then yellow up to 80C, then red if it goes above 80. I have an AMD processor that doesn’t mind running hot, so YMMV if you have a different processor and want to use the smart temp setting.

Yeah I can set the color of everything but I never set it to red because it makes it look like there’s something wrong with it.

I found in the settings a ‘smart’ setting that controls the color according to the CPU temp. It turned pretty but useless eye candy into a genuinely useful feature

Perhaps I’ll try that, thanks.

Yeah, same - I bought a machine and the version with RGB components was cheaper for the same spec than plain. I use the LEDs on the CPU fan to indicate CPU temperature and the bars on the RAM sticks like bar charts to indicate CPU and RAM load. It’s marginally useful.

Back around 2002 I (having never seen it done before) chopped a hole in my computer case and stuck some LEDs in there. Looked pretty good, IMO.

As for why they’re around fans, I would think it’s due, at least in part, to the fact that the OEM doesn’t really have to change anything around. They buy fans with the same form factor and the LEDs use the same power source. IOW, they’re just a drop in replacement for the plain old black plastic fans. Anywhere else they want LEDs, they’d have to find a way to mount them and find a way to get power to them.

Back around 2002 I (having never seen it done before) chopped a hole in my computer case and stuck some LEDs in there. Looked pretty good, IMO.

I just recently ran across photos of a system I built in early 2003: 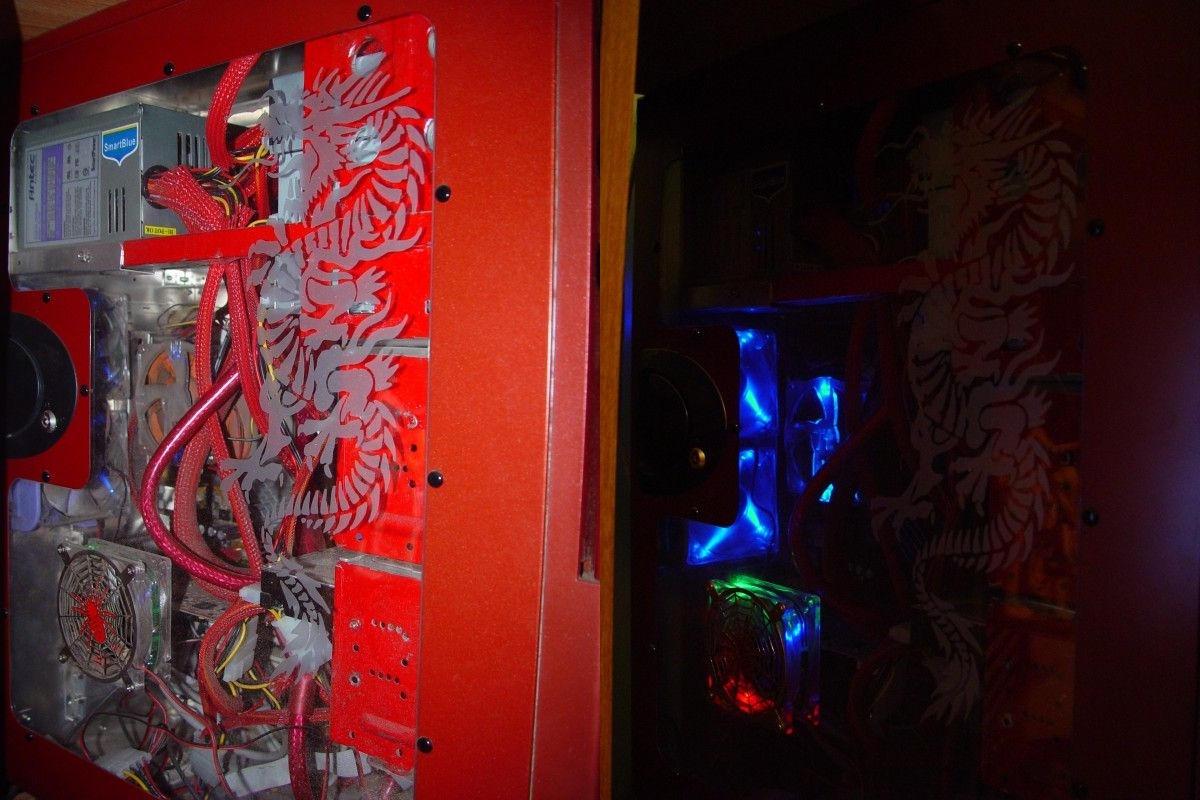 It’s pretty much its own thing- some people vie to have the coolest looking case- LED lighting, cable layouts, cooling line runs, and so forth, and they have tempered glass cases so all that can be seen while it runs.

I’m of the opposite approach- get an opaque case and don’t sweat that stuff, just play games. Although I have to admit that the CPU temp approach @solost did has a lot of merit. I think I’d want it to scale from green through yellow, into orange, and then red, not discrete states, though.

I used to think all the RGB stuff was silly - and it can be - but when I was putting together my system there were a few things that just always came with RGD LEDs (like my video card, sound card, and motherboard) and some stuff where the RGB version was either the same price or like 10% more (case, fans). I think it’s kind of fun. I wouldn’t pay a lot for it. I know some people pay a lot for crazy RGB setups, or where the RGB version of a keyboard is 60% more than the non-RGB version, etc.

The last time I was shopping for a computer mouse for my mom (who cares not one whit about such things), the cheapest one I could find had built-in color-changing LEDs.

You’d be hard pressed to find much in the way of gaming accessories that doesn’t use RGB lighting as a feature. Even internal SSDs have it now.

At my store, I have a handful of Raspberry Pis scattered around doing various tasks. Naturally, I always grab a cheap case for it as well. The last time I bought one, the cheapest RPi/Case combo came with a fan with color changing LEDs on it. I haven’t played with it much, but I don’t think there’s a way to turn off the lights. Luckily it’s kinda tucked away since it would look kinda stupid if it was in a spot where customers can see it (ie, stuck to the back of a monitor).

You can cut a couple of wires.

…the OEM doesn’t really have to change anything around. They buy fans with the same form factor and the LEDs use the same power source.

It’s not quite that simple, RGB fans require a control header to ensure the colors stay in sync with one another and so you can change their settings. Otherwise they’d just pulsate/fade/whatever their default state is. It’s a tiny box but it’s still an additional cost and more complexity.

Overall it’s just about the “gamer aesthetic.” It seems to be based on halo supercars (think McLaren, Bugatti, Lamborghini) with today’s angular chiseled “aggressive” look. That gets applied to the case, keyboards, mice, monitors, and even wi-fi routers (sigh). Gaming chairs are basically race car seats on wheels. Mixing RGB lighting with all that (as opposed to just angry red light) seems a little odd, but bright color accents are a staple of high-end automotive personalization ala Fast and Furious, even though it’s surrounded by angular blackness most of the time.

It is rather frustrating if you’re not into that aesthetic. Just try to find a mechanical keyboard or full-size mouse that doesn’t look ridiculous anywhere outside a 13 year old’s bedroom.

It’s not quite that simple, RGB fans require a control header to ensure the colors stay in sync with one another and so you can change their settings. Otherwise they’d just pulsate/fade/whatever their default state is. It’s a tiny box but it’s still an additional cost and more complexity.

But in some cases, are they not just on, with no user changeable settings? For example, one like this. Just a cheap three-wire fan, with the LEDs (as far as I can tell) just grabbing power from two of the wires. If it has any ability to change color/brightness etc, it’s built in.
If an OEM uses fans like this, there’s nothing extra for them to worry about. It uses the same power source, same attachment points, no additional software or hardware to worry about etc.
This, IMO, at least back when lighting the inside of a case was getting popular, is why these LED fans were so common.
But, even now, with addressable LEDs that require either an external remote or on board circuitry, the fan still makes a convenient spot for it. They don’t need to find a way to attach the lights, the people assembling the computer don’t need to do much extra work (at most, an extra connection to the mb), fans are often in big empty spaces and if nothing else, it looks nice since it’s accenting the only moving part inside the case.

Agreed, that’s 100% what it is. I’m not a gamer, but when I modified my case, it was for nothing more than looks (and a project for myself).
It’s like adding racing stripes to your car. If you like the way it looks, go for it.