Let's talk about the funniest British comedy of the last decade

As I have mentioned before, I’m a bit of an Anglophile when it comes to culture. I watch a lot of British TV, and listen to a lot of British radio. Lots more than I do their American counterparts. Of all of the recent shows I’ve experienced, there is one that is heads and shoulders above the rest. One show that makes me work not to guffaw out loud on a regular basis. That show is, of course, Radio 4’s “Cabin Pressure”.

With a tiny but very talented cast, a simple premise, and amazingly great writing, this show is a master class in the art of the sitcom. It’s set in a one-plane airline, and each episode generally covers one flight. The characters are the young, inexperienced pilot (Benedict Cumberbatch - yes, THE Benedict Cumberbatch), the older, cynical copilot (Roger Allam, who was in The Thick of It, and who has one of the best voices around), the even more cynical owner Carolyn (Stephanie Cole), and her idiot man-child son Arthur, who serves as the cabin crew (the brilliant John Finnemore, who also writes the show). In later series, Anthony Head joins the cast as

I think it works especially well on the radio, because it eliminates all extraneous distractions, and you are able to focus on what matters - the dialogue and the characters.

So, if you’re a fan, crack open some stolen Talisker and celebrate Birling Day. Also, yellow car. If you’re not, become one. If you only know Benedict Cumberbatch from Sherlock or Star Trek, you don’t know what you’re missing.

Even though I couldn’t see it from the mouseover, something told me this was going to be about Cabin Pressure.

Having only listened to the first season, I don’t feel qualified to rave, but I agree it is astonishingly well-done.

i bought all the series. no matter how many times i listen i scare the cats laughing. my favourites are in order ipswich, ottery st mary, qikiqtarjuaq, uskerty, vaduz, wokingham, and yvedon les bains.

the reports from people who have been to the tapings are just as funny as the shows. the picture of benedict being picked up and “flown” are really funny, to see that actually happen… bust a gut. http://24.media.tumblr.com/692658ccda97075f2c4415577bd671e0/tumblr_moq3x4Qr3m1sokdnuo1_500.jpg finnemore had to hold the script for him.

oddly i did not cotton onto the alphabetical order until someone pointed out that it couldn’t end a-y.

i’m looking forward to finding out how things shake out after the events of yvedon les bains.

It is good; I’ve listened to the first series and will probably get more the next time audible.com has a sale. However, to me, Bleak Expectations is even funnier—more of the sheer silliness that I enjoy in British comedy.

Ooooh, that’s a good contender, too. I love Bleak Expectations, and Anthony Head is amazingly funny in that one as well. I still have to give the edge to Cabin Pressure, though. The last couple of series of Bleak Expectations have been a bit same-y.

Are movies OK? In Bruges is mainly British and is my favorite comedy of the past 10 years(though it is also a drama in part).

Peep Show. Take Seinfeld and It’s Always Sunny in Philadelphia… and make it well demented, with a nice side of drugs and hormones. Brilliant!

I’m limited in what I’ve seen, but I’ll go with Green Wing. It’s set in a hospital, but rarely has anything to do with medicine; there are just a bunch of bizarre events and insane characters. No one in the show has any logical motivation at all, but they’re hilarious, as are some of the plot twists.

It’s a weird format – a one-hour comedy, filled with a lot of quick gags and short scenes, separated by speeded up slapstick events. It’s certainly not for everyone, but if you get it, you’ll love it.

Psychoville had moments of brilliance and was seriously laugh-out-loud outragous at times: 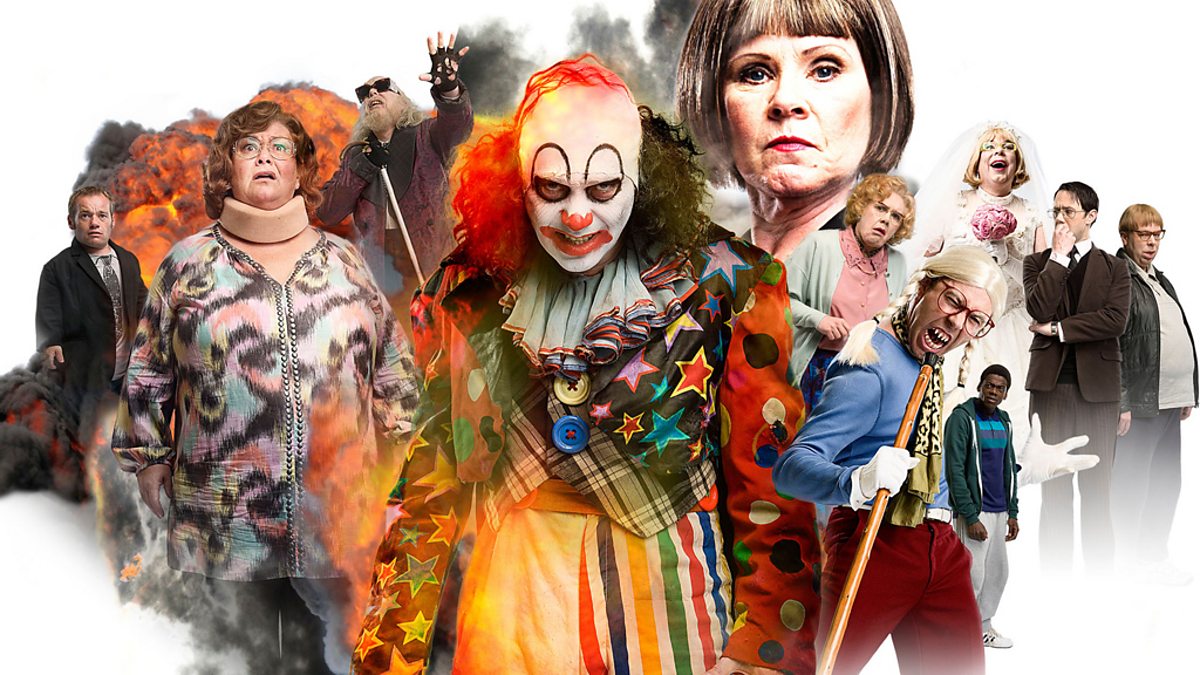 Dark horror-comedy from Reece Shearsmith and Steve Pemberton of The League of Gentlemen.

Last ten years? A bit difficult. I would probably have to go for the first TV series of The Mighty Boosh.

Some of my favourites over the last ten years have been:

There’s probably more that I can’t think of.

My clear winner though if you go back over the last 20 (and a bit) years is the stuff that Lee and Herring did as a double act: Lionel Nimrod’s Inexplicable World (radio) Fist of Fun (radio and TV) and This Morning with Richard not Judy (TV). Both Stewart Lee and Richard Herring have done decent stuff on their own, but nothing as good as any of the stuff they did together.

I’ve not yet heard Cabin Pressure but of the Radio 4 comedies I can remember, Bleak Expectations is the funniest of the bunch. (And if you like Dickensian parodies you might also try The Bleak Old Shop of Stuff, this time for television).

Also, pretty much anything Graham Linehan wrote will be the funniest thing ever. It’s practically a given.

Big up for Stewart Lee - jesus does he twist my melon, man.

This thread is quite timely for me. I just bought the first series of Cabin Pressure on iTunes yesterday. I have not had time to listen to it yet though.

I must admit I avoided Cabin Pressure when it was on the radio, as for some reason I assumed it was a re-run of the original radio series of The High Life (though googling tells me in fact there was never a radio version of The High Life), which I never liked when it was on the TV. When I have listened to it, it hasn’t really taken me but tbf I haven’t given it much of a chance either.

No, no. Very different. The High Life was horrible.

The only things I regularly watch are *Never Mind The Buzzcocks *and Sherlock. If you stretch things, my favorite British comedy right now is *Episodes *with Matt LeBlanc, Steve Mangan and Tamsin Grieg. It’s made for Showtime but shot in England with an almost all-British cast. Part of the charm is their attempts to pass so many pale and pasty Brits as being Californians.

Going back many years, but Blackadder was hiliarious…

Peep Show. Take Seinfeld and It’s Always Sunny in Philadelphia… and make it well demented, with a nice side of drugs and hormones. Brilliant!

I agree! I have not seen most of these other shows but I am not sure I could like any English comedy more than I like Peep Show.

I was going to mention The Fast Show, aka Brilliant, but I see that was the 1990’s. Apparently I have some catching up to do.