The ones I liked most were later in the series, when they’d used up all their A, B and C list ideas and were really scratching around for any sort of encounters. It was almost Monkey Tennis in Space every week.

But, if they can just get some guy in silver paint to do a heart-felt ‘CRUSH, KILL, DESTROY’ that I can use as a ring tone, then I will be very, very happy.

Oh, God, I hated the original show when it first aired – and I was a kid at the time. I thought it hopelessly clichéd and embarrassing.

I’d been brung up on Twilight Zone and Men into Space and…
…well, I would’ve said that it was something that Lost in Space ripped off, except that the idea was apparently common enough. There was a comic book, published by Gold Key starting in 1962, called Space Family Robinson, about the Robinson family with their heroic Dad and Mom and precocious kids and their FTL family starship who get lost and are wandering the galaxy. No Dr. Smith. No stupid robot. It was filled with SF tropes but wasn’t stupid about it. I loved it: 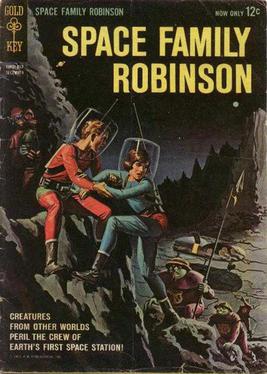 Give me a series based on the comic book, and I might pay attention

does anyone in hollywood have an original idea?

I know! It’s like Trump threads at the Dope.

Oh, God, I hated the original show when it first aired – and I was a kid at the time. I thought it hopelessly clichéd and embarrassing.

So was Battlestar Galactica.

Did you not see the movie? I don’t think it takes any effort to suck.

All it takes is a failure to grasp that the old show was a comedy.

Let John Prine take care of that for you.

Probably a few watched it for Bill Mumy. (Danger! Danger Will Robinson!)

Apparently Guy Williams thought so :D. Rumor was he was not so pleased at being quickly upstaged as the heroic pater familias by a tween kid, a guy in a robot suit and an a very affected older fellow playing a pathological coward.

The robot and Dr Smith weren’t in the original pilot so casting them (Smith was supposed to last for only a few episodes) was unexpected when Williams signed. That’s assuming he was impressed by the pilot. Mark Goddard (Major West) says he asked his agent if he thought any network would pick it up. The agent said no, this will be the easIest $500 you will ever make.
A year earlier Guy Williams was supposed to join “Bonanza” and be one of the four male leads. He was in 5 episodes. But Pernell Roberts decided to stay another year before taking his talents to the world of B movies and dinner theater. By the time he finally hit the big time a decade later withn”Trapper John MD” he learned his lesson about leaving successful shows over anger about lousy scripts.
There is a quote from actress Mercedes McCambridge, who appeared on an episode near the end of the first season, that some cast members were unhappy and it was clear that Jonathan Harris was the rooster who ruled the barnyard.
I don’t think various cast members talk much about Williams. They don’t seem to hate him (he died in 1989) but then again fans don’t seem interested in him. But according to wiki he did well with investments and ended up living in Argentina because he liked it (he was a Sicilian-American from New York City).

On a more serious note, how is Dr Smith going to work as a woman? A large part of his “appeal” (the thing we loved to hate) was that he was a sissy. I’m not seeing how a woman can effectively pull that off.

I find primates undesirable as pets and distasteful in general, so I can certainly do without one.* A lovable, intelligent “Lassie type” dog would be infinitely preferable!

On a more serious note, how is Dr Smith going to work as a woman? A large part of his “appeal” (the thing we loved to hate) was that he was a sissy. I’m not seeing how a woman can effectively pull that off.

Eh, I imagine the two Smiths will have about as much in common with each other as the two Starbucks did on BSG.

So was Battlestar Galactica.

1.) The original BG at least had decent special effects

2.) Lost in Space was more puerile and far, far worse.

I’m not saying BG wasn’t really and truly bad – it was abysmal. But it’s badness doesn’t affect how bad Lost in Space was.

Come on. Angela Cartwright was 13:eek:when the show started. Marta Kristen was 20.

All it takes is a failure to grasp that the old show was a comedy.

The old show started off seriously as SF/horror throughout the first B&W season (and, as CalMeacham points out, was hopelessly cliched and embarrassing).

By the final season, it had descended into hilariously ludicrous stories: Smith becomes a Space Hippie; Nordic Ice Giants; Space Pirates; Smith becomes a giant stalk of celery. This is the season all right-thinking Lost in Space buffs cherish. Aside from the “Crush, Kill, Destroy” guy. ALL OF US love him.

How about an expensive action figure? Available in mid to mid-2018.

“Crush, Kill, Destroy” guy is IDAK–Instant Destroyer And Killer, played by Don “Land of the Giants” Matheson. But you already knew that.

“Marooned on a planet”? Wasn’t that the premise of the pilot - and, for that matter, pretty much the entire second season?

At least they got around one inconsistency with the original; there aren’t supposed to be any stars between the sun and Alpha Centauri, yet the pass by Earth and end up on who knows how many habitable planets en route.

People say it was terrible but I watched it in the original run on TV, when I was eleven. It was the best show in the universe then!!! Now, maybe not, but I adored it. Can I tell a story about something that happened while I was watching?

On June 8, 1966 I was watching. It started at 6:30 PM local time. There had been severe weather warnings and I was upset because there were breakins to to show, for weather updates. Then, about 6:55, the tornado sirens went off. A monster tornado that would have been classified as F-5 went right through the middle of town. I sstill remember the fear. Our house was not in the path, but it was less than a mile from the point the tornado entered the city.

There was only one TV station at the time, and the temp anchor did such a good job on air, being calm and giving directions and updates, that network execs noticed him. That was Bill Kurtis, who made it big on television announcing. And he’d never planned on it, he was a law student then.