Mars’ moons are so small, it never occurred to me that they could create eclipses, but apparently Phobos is close enough to do that. They’re always annular, and the Lunar Rover indicates that they do significantly reduce the amount of sunlight that reaches the Red Planet. 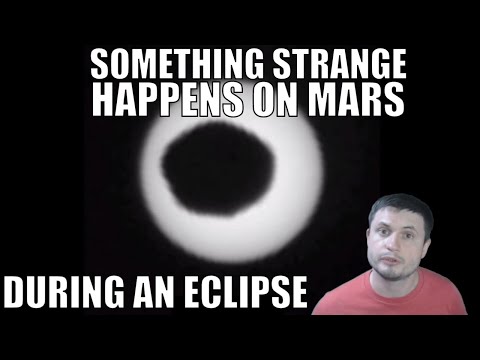 The host is of Russian descent and lives in South Korea.

Wouldn’t that be “phoban eclipses” ?

hey it’s Anton! I didn’t know he lived in South Korea. He packs a lot of info into some of his videos. Thanks for the thread with this one it, nearwildheaven, I haven’t seen it yet.

On the one hand, fascinating stuff and presented very well.

On the other hand, no mention of the Leather Goddesses?

maybe “marsquakes” is code for them? He kept saying earthquake, but corrected himself to marsquakes the one time

A related question: yesterday the moon was very close to Jupiter in the sky. Is there a special term for when Jupiter (or any other planet) is eclipsed by the moon?

More generally, “occulting” is when any object in the sky passes behind and is obstructed by another. AFAIK there isn’t a special term for “From Earth’s POV, a planet occulted by Earth’s Moon.”

Mars’ moons are so small, it never occurred to me that they could create eclipses, but apparently Phobos is close enough to do that.

Depending on what mental model you have for what’s an eclipse, any body orbiting any planet will occasionally eclipse the central star. As will any other body orbiting the same star in a closer orbit.

e.g. when from Earth’s POV we see Venus transiting the face of the Sun, it’s eclipsing the Sun. Just not very thoroughly since the Sun’s angular diameter is vastly larger than Venus’s. Earth likewise occasionally eclipses the Sun from Mars’s POV.

From the POV of a Mars surface observer, both Phobos & Deimos eclipse the Sun to varying degrees every so often.

How much smaller is too small to call the event an “eclipse” and instead call it an “occultation” is, AFAIK, simply a matter of taste.

Wouldn’t that be “phoban eclipses” ?

Apparently I’m the only one who agrees with you.

Apparently I’m the only one who agrees with you.

Nope. I agree with you both. I just chose to quibble about a different word.

Pedantic wankers of the world unite! We have nothing to lose but our friends!

And fighting ignorance to boot!

Sorry about my mistaken terminologies. This is our Earthly version of anthropomorphizing things, I guess.

e.g. when from Earth’s POV we see Venus transiting the face of the Sun, it’s eclipsing the Sun. Just not very thoroughly since the Sun’s angular diameter is vastly larger than Venus’s.

Awesome pic! I’d seen your avatar but had not processed what it was. That must’ve been a neat adventure.

Funny enough, with my mindset primed by this thread’s topic when I scrolled to your post I saw the avatar, recognized it was Venus transiting the Sun, then read your text as

Which made me start running down which missions were near Venus then and that means the transitor must be Mercury but … but … Oh crap he said Vienna, not Venus! Whew, it all makes sense now.

Human cognition is a weird whirlwind. And it’s not even happy hour here. Yet.

Sorry about my mistaken terminologies.

I’m not all that sure I didn’t misuse a word or two myself. Transit, eclipse, and occult all refer to temporary near-alignments of two objects as seen from a third. And each word has various conjugations and forms for various parts of speech.

Having now done the reading I should have done before …

There was another more recently, in 2012. One of my local colleges had a telescope set up so people could see it. I went, and it was quite interesting.

Even more interesting was the information our ancestors gleaned from prior transits.

Sorry about my mistaken terminologies. This is our Earthly version of anthropomorphizing things, I guess.

Don’t be too hard on yourself. I stared at the “phoban” comment for many long moments, mouth slightly agape, before I finally decided “Yeah.”

Unfortunately, I missed that one.

I’ll catch the next one though… Can’t be too far off, can it?

For what it’s worth, eclipses (partial, very annular ones) are one of the two main methods for detecting planets around other stars. Only about 1% of planetary systems are aligned correctly for it to be visible, but it’s possible to extrapolate from those we do see (unlike the other method, observing wobbles in the star’s own orbit, which works only for very large, close planets and tell us nothing at all about how common smaller or more distant planets are).