I was watching an interesting documentary the other day about a 2 year sea voyage. It had a section on food prep. They had a vast quantity of eggs that they stored non-refrigerated. The prep was to cover them liberally in Vaseline and pack them in 2’ x2’ crates. They explained that the crates were rotated every 24 hours to avoid the yolk touching the shell. In that way, the shelf life of the eggs was greatly increased.

However they did not mention how long this would keep them safe. Has anyone heard about the rotating method? How long could one expect an egg treated in this manner to last?

This is a good article on background. 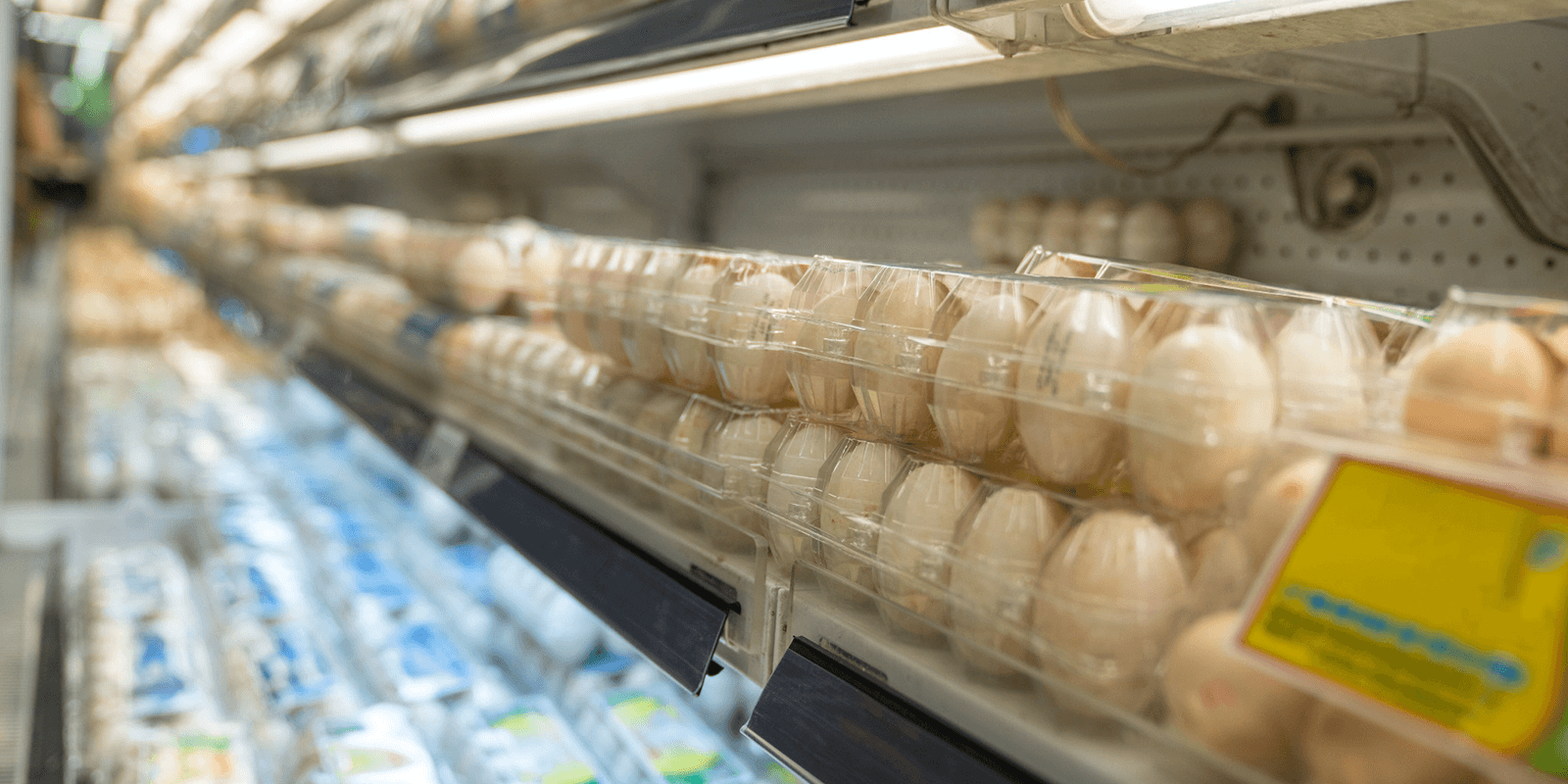 Why Does the U.S. Refrigerate Eggs When Much of the World Doesn’t? | Organic...

Stroll through another country’s supermarket and you might be surprised where you find the eggs. Even more surprising: The different ways countries handle eggs are both solutions to the same food safety concern. Read on to learn more.

Apparently the U.S. approach is to wash thoroughly, which removes bacteria, but it also removes the cuticle, which leaves the eggs more susceptible to subsequent bacterial growth - hence the need for refrigeration in the U.S. Shelf life is around 45 days.

The approach in Europe and Asia is that they should not be washed, to leave the natural anti-bacterial protection of the cuticle intact - so that refrigeration is not necessary. Shelf like is halved to 21 days, but it alleviates concern about the need for continuous refrigeration in the supply chain under the U.S. protocol.

Reading up on this certainly fought my ignorance. It is not just a matter of opinion whether eggs should be refrigerated. Eggs bought in the U.S. require refrigeration because the cuticle has been washed off, whereas eggs bought in Europe or Asia do not.

I can’t find anything about your specific protocol, but presumably the vaseline coating inhibits bacterial growth on the shell, as well as protecting them from damage.

Thanks for the link. I’m also interested in the bit about the yolk touching the shell hastening the spoilage.

A long time ago I read a journal of some folks who moved to Oregon on the Oregon Trail about 1848 or so. They had a wooden barrel filled with lard & eggs in their covered wagon. The eggs were completely covered by the lard. They used the eggs along the way & ate the last ones about 90 days after they were put in the barrel.

They did not rotate the eggs. What with all the details they recorded, they would have mentioned rotating the eggs.

My disclaimer: Do not try this at home. It was in a Journal of a trip by a family from Illinois. I do not know how accurate it is/was.

I have always wondered if this would work. Just not interested enough to try to replicate it.

Maybe when I fully retire I will try it. I could check to see how long before they float in a pail of water. When they float, they are bad. This I know from experience. My grandma was right about this test.

They did not rotate the eggs.

If there’s some valid reason behind the rotation, perhaps the consistent motion every day on the trail was sufficient to obviate the need. There would sometimes be significant motion on a ship, but sometimes calm periods.

This youtube video goes over some historical 18th century methods for preserving eggs: 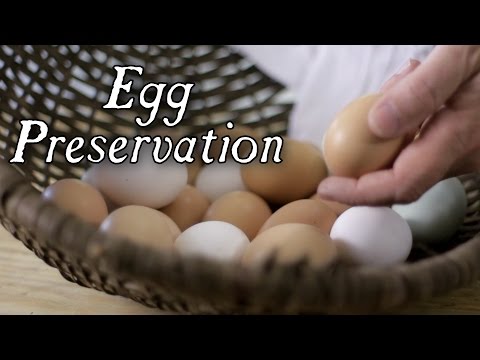 The top method is storing the eggs in a slaked lime solution that would apparently keep the eggs good for two years.

The top method is storing the eggs in a slaked lime solution that would apparently keep the eggs good for two years.

I think this method is referred to as water glassing. It works.

Apparently the U.S. approach is to wash thoroughly, which removes bacteria, but it also removes the cuticle,

I have wondered if applying an artificial cuticle after washing would allow eggs to be stored non-refrigerated. I just haven’t wondered enough to actually research it.

Isinglass was a common preservative in the 19th and 20th centuries. Isinglass is a form of collagen obtained from the dried swim bladders of fish.

In the first half of the 1900s, people at home would preserve many eggs in a bucket or crock filled with liquid Isinglass, and the technique is still viable. Isinglass is bacteria-resistant and helps prevent organisms from entering the eggs, as well as helping prevent evaporation of the water content of the eggs.

If the eggs are from a farmer or backyard (i.e. not commercially cleaned), wipe them with a damp cloth (don’t wash.) Use only eggs with no surface cracks.

Mix the Isinglass into water, heat, and let cool, at which point it will form a sort of white jelly substance.

Arrange the raw shell eggs in the crock, point down. Pour the cooled Isinglass mixture over them to cover completely, then cover the crock to keep dirt, bugs, mice, etc out of it.

Keep the eggs submerged in the Isinglass completely until you take them out for use, and keep the crock in a cool place: this technique does not work well in warm places.

Eggs stored this way will keep for 6 months to a year. Up into the early 1970s, my grandmother used to sell excess eggs to the grocery store. They would sit out on the porch, unrefrigerated, until she had enough to make it worthwhile to go to town to the store.

I have been told, but cannot verify, that it is common at grocery stores for the eggs in the back to be sitting out without refrigeration. Has anyone here ever worked in a grocery store and seen them refrigerated in the back?

About 3 am one November or December morning a few years ago I was making breakfast and found that I was out of eggs. The grocery store wouldn’t open until 8 am and so I went over and got two eggs from my younger brother’s refrigerator. I boiled them and noted that they did ride high in the water. When I removed the shell, I saw that they had big air bubbles on each end – the egg resembled an artists depiction of a red blood cell, but white instead of red.

I went ahead and ate them and they tasted just fine, but I should have boiled three or four instead of two. I found out that the eggs were left over from the fishing trip in April that year.

I am pretty bad about not paying attention to “sell by” or “use by” or “best by” dates. Last year (in 2021), I had a jar of the best tartar sauce I have ever tried. It was an ordinary over the counter brand but the “best by” date was in 2019.

I have been told, but cannot verify, that it is common at grocery stores for the eggs in the back to be sitting out without refrigeration. Has anyone here ever worked in a grocery store and seen them refrigerated in the back?

Sorta. I was in a back warehouse which was deeply air conditioned , down to low 60s. The eggs were sitting out.

At our Ralphs they are refrigerated.

… hence the need for refrigeration in the U.S. Shelf life is around 45 days

In the summer when I start running the air conditioning, I largely stop using the range and oven until cooler weather shows up and whatever eggs are in the house sit for a while. I’ve had (washed & refrigerated) eggs with sell-by dates in May in September and October. I never had one go bad or noticed any difference in flavor or texture.

I do not know how it is done now.

I’ve had (washed & refrigerated) eggs with sell-by dates in May in September and October. I never had one go bad or noticed any difference in flavor or texture.

I’ve also had (US, washed, refrigerated) eggs that were several months old. The whites get thinner, and when i had some old eggs and wanted to make meringue, i bought new eggs. But i ate those eggs later. They were fine as soft boiled eggs, and also fine in chocolate chip cookies.

I did once come across a spoiled egg. It had a hairline crack that i hadn’t noticed. I usually break the eggs individually into a cup before adding them to whatever, and that was the one time in my life that it mattered.

I usually break the eggs individually into a cup

I think this used to be standard practice, but coming across a bad egg is so rare now that many people don’t bother.

My mother always did this, but she grew up in a village and eggs came from free-range hens. Most of them would be lovely and fresh but hens were good at hiding their eggs and by the time they were found, they might be several weeks old,

There’s absolutely no way that would fly with HACCP standards these days. At the store I work at, the only time the eggs are at room temp is when they’re being transferred from the refrigerated truck into the walk-in cooler. They’re at room temp while they’re sitting in your cart for longer than they are when they’re in our possession.

Yeah, i think it’s one of those things that used to make sense, and i was taught to do as a child, but that really doesn’t make sense any more.

I had an interesting conversation about this with a random American internet stranger who saw unrefrigerated eggs in one of my videos - it started with the assertion: ‘UK needs to start refrigerating their eggs. The way the US does it, such as disinfecting the eggs, is the better option.’

I made the mistake of engaging in discussion, pointing out some of the facts people have detailed above, but this person could not accept it, and insisted that eggs in the USA were safer, because of all the intervention.

So we looked at statistics relating to salmonella poisoning related to eggs, US vs UK. UK is lower…
(eggs are safer here not just because of the not-washing thing, but also animal husbandry standards)

“Well, we’re obviously not cleaning them enough. We need to use more cleaning processes and harsher cleaning materials in order to destroy all of the bacteria” was the answer.

I mention this because I have been thinking about starting a thread on this general topic for a while. I don’t think there’s any way to state this without it being a little bit offensive - I wish there was - but I have noticed this as a bit of a cultural quirk that seems to be more prevalent in the USA; it basically consists of:

I think it might be a throwback to some aspect of puritanism - that the world is broken and depraved and dirty and only by our hard work can we make it cleaner and better. Nature needs to be redeemed. Dunno. I’m way out on a limb here, but I have seen this sort of thing in other contexts such as self-medication.