Meaning of "Here's mud in your eye!"

I’ve never understood this toast. How is drinking alcohol related to getting mud in one’s eye? I did a little googling, but the results were not edifying. I’m hoping somebody here can enlighten me or at least provide a plausible theory.

I’ve heard that it refers to a biblical cure, so Here’s a cure for what ails ya!

Nobody knows, and everybody has guesses, most of them worse than the origin of the whole nine yards.

The best place to start is, as usual, with Barry Popik.

He traces the phrase back to 1911, which knocks out all the WWI trench theories. And his cites show that it must have been a nigh universally known phrase then.

The book Dictionary of Word Origins (1997) by Jordan Almond explains:

“The expression is not a toast to another; it is a toast to yourself—for it means, ‘I hope I beat you.’ The allusion is to a horse race. If the track is at all muddy the rider of the losing horse is very likely to get mud in his eye from the horse that is winning.”

How Almond justifies that is unknown. But that’s probably the best we can do.

Oh, and the Bible allusion is found here:

Another school of thought say that the phrase “Here’s mud in your eye” has the bible as its source of origin, particularly where Jesus was said to heal a blind man using mud. In that scenario, Jesus smears mud on the blind man’s eyes. He then wipes the mud off the man’s eyes, making the blind man regain his sight. It is this theory that people use to make sense of the expression as it common for people to toast to good health. Nevertheless, there isn’t actually any credence to either theory.

I’ll drink to that!

Whether or not Almond’s theory is accurate, it makes sense.

Now I’m wondering whether Mr. Almond adopted the name of the confection or whether his parents had a quirky sense of humor.

The best place to start is, as usual, with Barry Popik.

You won’t often go wrong taking Popik’s word for it.

This does bring up a pet peeve of mine: people will use a catchphrase that they heard their grandparents say, without having any idea what it means. And it perpetuates as a meaningless phrase.

My mother has dozens of these. And she’ll just shrug and say “It’s just an old saying.” She’ll even take it one step further and not really know what exactly she’s trying to say at that moment. It’s just meaningless filler.

She’s always asking “Need a little tide-me-over?”
And I’ve tried to find out why she’d say that, with no luck. As a kid, I’d go into Investigative Journalism Mode: “It’s still an hour 'til dinner, so you’re clearly asking us if we want a snack. Are you offering us Tide detergent? Or are you afraid we’ll get hungry while we’re waiting for the tide to come in, so our three-masted schooner can leave the harbor?” (I thought that one was pretty plausible…)

Last time my mom said “It’s a horse apiece.” I replied “What horse? It must be more than one, are they identical twin horses? Are you going to ride one, and you don’t care which? And what in Mister Ed’s name does your stable of twin horses have to do with fondue at Christmas?” (That was the issue at hand)
“Oh, it’s just an old saying. I have no idea…”

“And you don’t WANT to have an idea! You’d rather just fill up a nice, quiet evening with meaningless ‘old sayings’! We’re about to make a special dinner and we’ll always wonder ‘Did mom really want to have fondue?’ But you couldn’t just communicate with actual words that have meanings and tell us what you think!”

Ok, I didn’t say that last paragraph out loud. She would’ve sulked through dinner.

(anybody want to start a thread on this? You can quote this post)

This does bring up a pet peeve of mine: people will use a catchphrase that they heard their grandparents say, without having any idea what it means.

Good one. My mom will also use the phrase “Hey nonni nonni and a ha-cha-cha.” “What’s that from, Mom?” “Oh, it’s just something people used to say…” One of these days i’m going to say “What people? I need names… and ages. Are any of them still alive?”

And what’s a pet peeve, anyhow? Does anyone use the word peeve without mentioning that it’s a pet?

(I’ll bet digs has never even googled it…)

I drew a comic strip once, and after a panel introducing the protagonist, the next panel was labeled “And his pet, Peeve.”…

My wife and kids insisted on less creative names for our actual pets.

I’ve used it as He was peeved.

That’s true. But what sounds off about ‘pet peeve’ is that I’ve never heard peeve as a noun. Has anyone here?

Maybe I’ll start using it: “Sure is a helluva peeve, Jacksònnn…”

Watch for it in the Personal Catchphrases thread…

My theory was that Mr. Heep was down on his luck and nigh upon starving to death when a kindly woman took pity on him, offering part of her dinner, “Here’s mutton, Uriah”

Good one. My mom will also use the phrase “Hey nonni nonni and a ha-cha-cha.” “What’s that from, Mom?” “Oh, it’s just something people used to say…” One of these days i’m going to say “What people? I need names… and ages. Are any of them still alive?”

Yes they are. I say it on occasion, and I stole it from the Reduced Shakespeare Company. 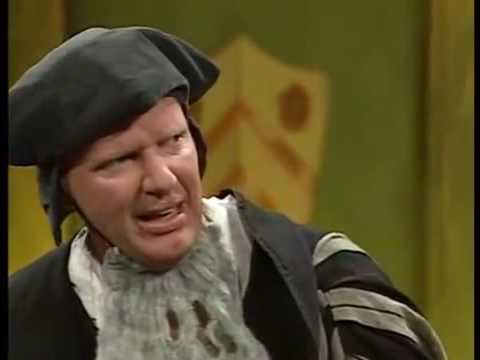 Hey nonni nonni and a ha-cha-cha.

It’s a line from Groucho in Duck Soup.

I told one of the guys in the Reduced Shakespeare Company after a performance that it was like seeing the Marx Brothers on Broadway. He took it well.

I heard that when John Wilkes Booth shot Lincoln, he saw a doctor (IIRC JWB broke his leg jumping from the balcony to the stage). That doctor’s name was Mud or Mudd. The doc had no idea what had happened; here was a guy with a broken leg, sure I’ll patch you up, etc. But later on people blamed the doc for attending to the wound of a traitor. “Your name will be mud(d?)” came from that. I wonder if mud in your eye is related.

And it perpetuates as a meaningless phrase.

Presumably they think it means something that fits the scenario. But I think of Mrs. Slocomb (sp?) on “Are You Being Served?” who would get indignant and emphasize, “And I am unanimous in this…” Likewise, people tell me the point is “mute” and it doesn’t matter “irregardless” and so on.

And what’s a pet peeve, anyhow? Does anyone use the word peeve without mentioning that it’s a pet ?

Good point. There are certain peeves we nurture, giving them most favored nation status. We’re on the lookout for infractions. Other peeves, well, they’ll just have to wait in line.

I think the word family is somewhat well rounded on this one. You can be peevish (adj), something can peeve you (verb), you can have peeves (nouns).

Is peeve short for something?

I just don’t think many people have ever used peeve as a noun. Every usage of it in a dictionary sounds like they’re thinking “Well, it’s a verb, there must be a noun.” One such usage was:

PEEVE, an annoyed or irritated mood:
to be in a peeve.

No. Very awkward. I’ll bet no one’s ever said the words to be in a peeve.

Well, not until the contrarians here start using it (like the quarry or regards)… just to peeve everyone here.

Likewise, people tell me the point is “mute” and it doesn’t matter “irregardless” and so on

actually its moot and it used to mean pointless or redundant

believe it or not, I learned what it meant after watching an SNL skit when Jesse Jackson was trying to be the democratic party candidate for '88 and he hosted and had a game show skit that used the word

No. Very awkward. I’ll bet no one’s ever said the words to be in a peeve.

Now you have peaked my interest.

I always assumed “mud in your eye” had it’s origin in the same kind of “don’t wish me luck” superstition as “break a leg” in the theater or (at least in Norway) “(hope you have) shit fishing”.