I wear Aramis (and have since the '80’s. Just a little bit though

As a person living with serious lung disease the pollution of perfumes is extremely problematic. My movements amongst people are severely restricted due to the chemical overload.

How do you cope with your own hygiene? EVERYTHING is scented. Ivory soap is 99.44% pure because the rest is scent. “Unscented” deodorants contain scent to mask the odor of the chemical, of you read the fine print. I have found unscented laundry detergent, but only a few brands do that. I’ve never seen an unscented dish soap.

Due to long association, I apparently find that the combined scent of sweat, gasoline, and carburetor cleaner to be very masculine.

Perfume, not so much.

I don’t think men or women should wear scent on a regular basis, myself. I have never found it charming on women and I find it foppish in men.

I don’t think men or women should wear scent on a regular basis, myself. I have never found it charming on women and I find it foppish in men. -

What about the smell of battle and the blood of my vanquished enemies?

All of this stuff exists, I’ve encountered it (and I buy unscented laundry detergent myself) but it’s a niche market. Because so many people have become sensitized to odors, I believe the market is growing for unscented products.

I love scents of all kinds. But I don’t like being overwhelmed by them. I like a light scent on my husband, even just the smell of his deodorant.

What about the smell of battle and the blood of my vanquished enemies?

Oh, add those in.

My wife likes it when I smell like Dawn Dishwashing Liquid

I always thought that there was a difference between cologne and aftershave - I thought aftershave had a practical purpose (I.e. the skin has just been scraped with sharp steel, so aftershave is intended as a salve to help it heal).

And for that, I use Old Spice, because it’s a classic that reminds me of my grandfather.

I don’t use cologne, too, but I’m sort of obsessed right now with getting a bottle of the stuff that George Washington used (which I learned about from another Dope thread). 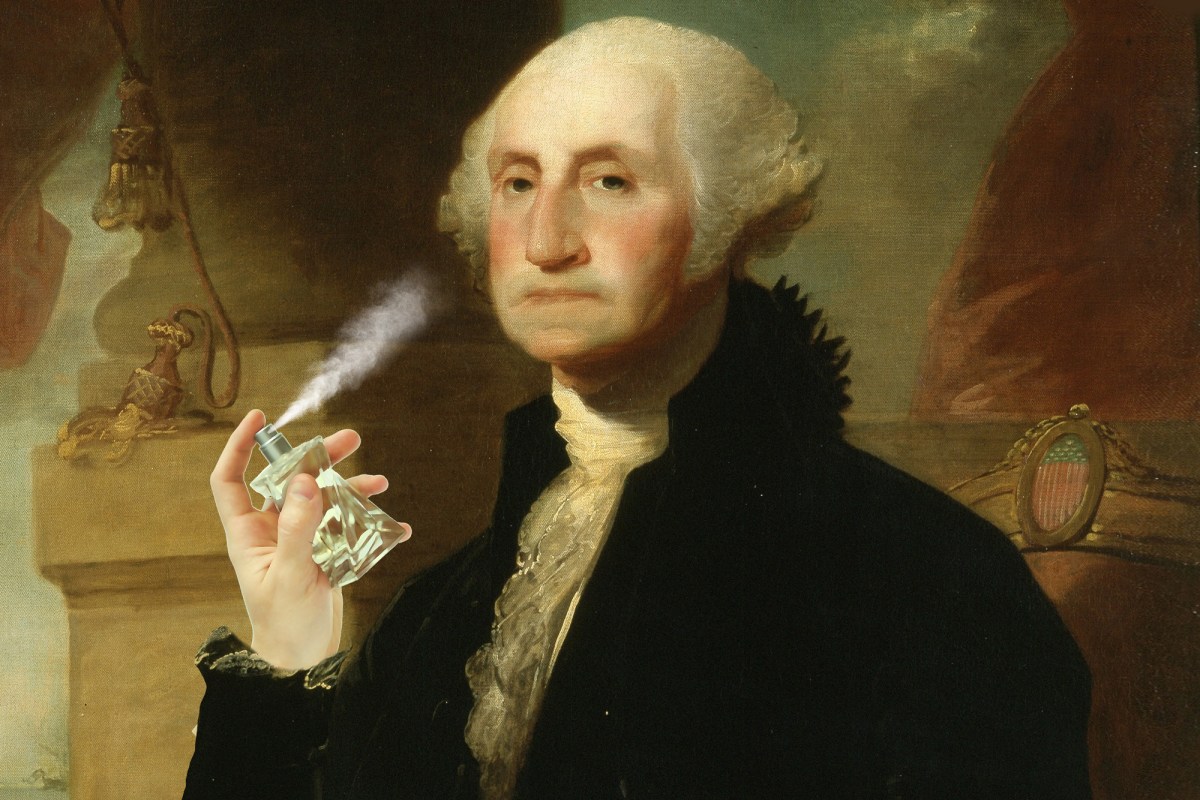 If it's good enough for a founding father …

Only when mixed with sweat and tears.

I was watching a little documentary about the R&B group Boyz 2 Men, and not only are they smooth as hell and look fiiiine, in my head I kept thinking “Man, I bet they smell amazing.” I put the thought out to some of my girl friends and they agreed. Those fellas LOOK like they smell amazing.

I want to be able to smell it when I hug you, not when you walk by.

Funny note - every so often I go to the community swimming pool and I can smell someone’s perfume or cologne. In the chlorinated pool, where nobody is wearing clothes (aside from a suit), where we’re not near each other and we’re all wet. It’s amazing. I cannot begin to fathom how these people are applying scent to make it that strong and persistent.

There was a perfume called Giorgio (is it still around?) that had one of those nasty scent strips in every freaking magazine I used to get. It was awful. And it was a migraine trigger for me. Sadly, the women who wore liked to marinate in it.

General smells from washing yourself and your clothes aren’t so much a problem (once dry) as the carriers for the scents that are applied on top. It is a chemical thing, not a smell thing. You are right I need to be careful about what I use myself. The asthma rates here in Australia may be why I don’t find unscented products hard to find though the supermarket brand of bar soap is fine in the shower and for hand washing. A lot of “green” products are also no or low scent. I have unscented “sensitive” dishwashing liquid, deodorant, washing detergent etc. I have no choice but to allow my hair to grey naturally and my nails are bitten rather than painted (just as well I’m butch, I’d be a miserable femme).

Not all scents are evil to me, if you dab a bit of essential oil on you it isn’t likely to impact me personally, it may someone else though. Just yesterday I stopped an allergic itch with tea tree oil and I clean the toilet with bicarb which has a few drops of eucalyptus through it. Cleaning is a bitch with chemical sensitivities, much more scrubbing.

What are Volatile Organic Compounds (VOCs) and where do you find them? Learn more about this common asthma and allergy trigger and how to limit your exposure.

Common products, like perfume, paint and printer ink, are polluting the...

A surprising study published in Science found that as fuel emissions drop, consumer products are playing a larger role in air pollution.

I haven’t been able to find my preferred shampoo or deodorant unscented.

You can get a very inexpensive and effective deodorant that is completely fragrance-free. It typically comes in the form of a small crystalline rock, which is some sort of alum compound. You get it wet and rub it on the target areas and it is usually good for the day. It might, however, take your microbiome a few days to adjust to it. A stone that you can wrap an average hand around (about a third the size of a typical soap bar) will usually last one person a decade or more.

Back when I shaved, I liked the feel of aftershave aftershaving. But that was 56 years ago. I use ivory soap, which is unscented as far as I can tell, an unscented shampoo and have never, believe it or not, used or needed (according to my wife) deodorant. I do sweat in hot weather, but the sweat seems to be odorless. My wife used to use a bit of 4711, but hasn’t in decades.

My deodorant is a Nivea roll on available in every major supermarket. Of course it may well be problematic for some but is fine for me

Our National Asthma Council sell a blue butterfly logo to products they deem safe that present themselves for scrutiny. That’s useful too.

I wear aftershave, but it’s very faint. Smelling clean is fine, but I like the upgrade to smelling nice.

A friend of mine got way into men’s fragrances during Covid, not a bad hobby for the times. He was buying bottles and reselling samples in 3-5 milliliter sizes, picture the ‘tank’ part of the bottle (so not including the sprayer part) about the diameter of a medium Sharpie marker and a little over an inch long.

Years ago, I’d occasionally worn Issay Miyake or the odd Jean Paul Gaultier Le Male, Acquia di Gio and a few Calvin Kleins, Dior, DKNY along the way before that but hadn’t really put any on in some time. His interest was contagious and he gave me a couple of his samples: 3 mL each of Versace Dylan Blue and Yves Saint Laurent L’Homme. In the last year, I’ve worn each perhaps 2-3 times (last was at Christmas, before that, in September) and I felt amazing with each one.

I’m also sensitive to too much (certainly not as much as others) and I usually use this technique: I shower, towel off and then spray the damp towel. Rub the towel over my chest and neck to transfer a little of the fragrance. It keeps from being too much and the towel smells great for the few days I might use it after. If I want an extremely light touch, I might spray the towel, then run the ‘sprayer aperture’ behind my earlobes or across my wrists.

I really, really like both of these newer scents and recommend the Versace for lighter summer daytime and the YSL for darker cooler months.