Are there any professional men’s sports teams with a female mascot?

An interesting question, and I enjoyed researching the answer.

Here is one of several articles I perused, the overwhelming opinion of which is that basically, there aren’t any.

Mascots: Where are all the Women?

Vincennes the Alices in name only

Getting to know Greensburg's opponent in Saturday's boys' basketball regional, Vincennes Lincoln, some folks may ask: So, just what is an Alice?

EDIT: Yes we realize the OP asked about pro teams…

The Lowell Spinners (former Red Sox minor league team) had 3 mascots - Canaligator, Allie-gator, and Millie-gator, 2 of whom were female.

Yes we realize the OP asked about pro teams…

I’d forgotten that college sports are a huge thing in the US, so I’m fine with any examples from that domain.

EDIT: Yes we realize that you were talking about high school teams…

Are there any professional men’s sports teams with a female mascot?

Here’s one in Japan: 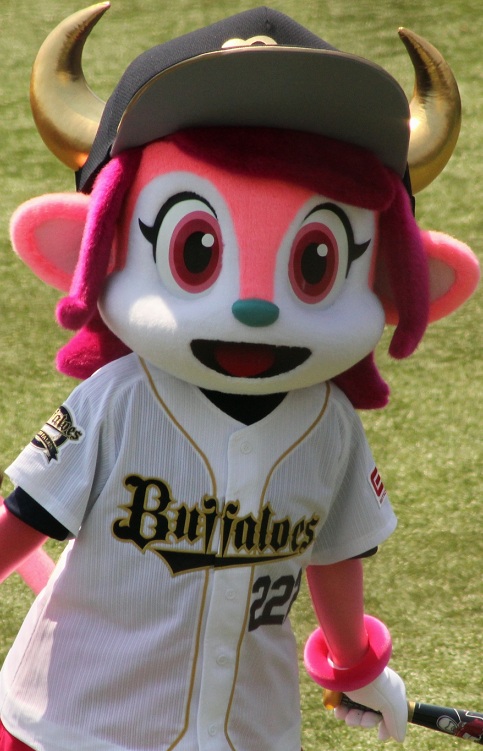 Buffalo Bell (バファローベル, Bafarō Beru) is the sister of Buffalo Bull, as well as the second mascot for the Orix Buffaloes. She has been nicknamed BuBell, or Bell-chan by fans. Bell has probably had the most commercial success out of all Japanese...

The Toledo Mud Hens have both Muddy and Mudonna (claimed to be "The original ‘Material Bird’ ") as mascots.

Mrs. Met (previously referred to as Lady Met) is an official mascot of Major League Baseball's New York Mets. She is the female counterpart to Mr. Met and among the oldest of the MLB's mascots. Lady Met was introduced by the Mets organization in the mid-1960s, soon after the Mets’ inaugural season. She is one of Major League Baseball's oldest mascots. Like her male counterpart, Lady Met was a human with a large baseball head. Unlike Mr. Met, however, Lady Met had hair. She appeared in print ...

These are all great answers, thanks! But so far all the female mascots seem to be paired with a male mascot. Are there any men’s teams who have a female mascot with no male counterpart?

As mentioned by @Jasmine, there doesn’t seem to be any. The Washington Nationals have Rebecca but she’s still secondary to Screech.

It’s not clear if the OP refers to “mascots” in the sense of “what the team is named after” or more literally in the sense of “people wearing costumes on the sidelines”. Not all teams in the US employ mascots in the second sense.

You could count the Oregon Ducks, since technically all ducks are female (the males are called drakes). The mascot is clearly modeled after Donald Duck (its official name is simply “The Duck”) and is usually referred to using male pronouns, but the costume doesn’t have anything gender-specific about it.

There are also the NHL’s Anaheim Ducks, but I don’t know if they have a costumed mascot.

Also, the University of Georgia Bulldogs use (or at least used to) an actual live bulldog as their mascot. I think I remember reading that those dogs were always female because they were calmer in the stadium environment, but I could be mistaken.

I mean an identifiable character (human, animal, monster, or whatever) that officially represents the team for the purposes of publicity or for rallying the fans. This would include a live person in a costume but also an illustrated character that appears only in the team’s logo or other print/digital material.

You could count the Oregon Ducks, since technically all ducks are female (the males are called drakes).

Your notion of what a “duck” is is at odds with how the vast majority of English speakers on the planet use the term. Yes, it can be used to refer specifically to the female of the fowl, but this sense of the word is so specialized and rare nowadays that it has no bearing on the present discussion. (The OED does list a definition for this sense, but it includes an explanation that unlike drake, the term is generally used without distinction of sex.)

Also, the University of Georgia Bulldogs use (or at least used to) an actual live bulldog as their mascot.

This is probably closer to what I had in mind, but were the dogs presented to the public as female? That is, did the team give the dogs a feminine name or use female pronouns to refer to them? If not, then the case isn’t so clear cut. (And it makes me wonder if any of the people inside outwardly male costumed mascots were female. I don’t think those would count as female mascots either.)

And, in fact, it’s not just modeled after Donald, but it is (or, at least originally was) the actual Donald, starting in 1947, when Oregon’s athletic director and Walt Disney himself made a handshake agreement to allow the school to use Donald Duck as their mascot. That handshake agreement eventually evolved into a formal licensing agreement between the school and the Disney company

In recent years, the costumed mascot has been “decoupled” from the Donald Duck trademark, and now does not look as much like Donald, but the represenation of the Orgeon Duck in graphics (such as on t-shirts) is still the trademarked Donald Duck. The Oregon Duck is the mascot of the University of Oregon Ducks athletic program, based on Disney's Donald Duck character through a special license agreement. The mascot wears a green and yellow costume, and a green and yellow beanie cap with the word "Oregon" written on it. Oregon teams were originally known as Webfoots, possibly as early as the 1890s. The Webfoots name originally applied to a group of fishermen from the coast of Massachusetts who had been heroes during the American Revolution...

This is probably closer to what I had in mind, but were the dogs presented to the public as female? That is, did the team give the dogs a feminine name or use female pronouns to refer to them?

Doesn’t look like it. The school’s actual bulldog mascot is named Uga (an abbreviation for University of Georgia); the current Uga is the tenth in the line, and it appears that most, if not all, of the Uga dogs were/are male.

Well, I did say “technically”. I’m aware most English speakers don’t make that distinction in everyday speech. It’s the closest I could think of to an answer to the OP, though.

Guess I misremembered about the Ugas being, um, girl dogs. And now thanks to kenobi, I know not only that they are male, but that, per Wikipedia,

Deceased Ugas are interred in a mausoleum near the main entrance at the southwest corner of Sanford Stadium. A bronze plaque describing each dog’s tenure and including an epitaph is engraved in front of each tomb.

The Toledo Mud Hens have both Muddy and Mudonna (claimed to be "The original ‘Material Bird’ ") as mascots.

It’s not the Mud Roosters, so yeah.

It’s not the Mud Roosters, so yeah.

Though, the term “mud hen” is a colloquialism for a waterfowl species, the American coot; in that context, the term seems to be applied to both male and female birds.

The baseball team’s original ballpark was located near a marsh, which was inhabited by coots, and the team wound up with that nickname as a result.

Speaking of hens, the University of Delaware are the “Blue Hens”.

Is there any team with a cow as a mascot?

And “Fighting Irish” doesn’t imply any particular gender, and the mascot as drawn appears to be male, but “Notre Dame” is female, for whatever that’s worth.