Methods for two people to communicate without being noticed

What are suitable methods for two people, in close proximity, to communicate with each other without those around them noticing? (the consequences are dire if found out)

The one that came to mind was that they could use fingers to trace out words on each other’s back or shoulder quickly. That might be noticeable, though, and also wouldn’t work through thick clothing.

Methods like tapping out or blinking out something in Morse code seemed too complex and slow.

(passing written notes risks it being caught and examined)

Perhaps some kind of device that vibrates in their pockets. One taps on it in Morse code and the other receives gentle vibrations they can feel.

They just look like their hands are in their pockets

It depends on the content. A quick wink can say a lot. A few crooked gamblers could develop some really simple signals to get an advantage at a poker table. A crooked baseball team could steal signs and use drum thumps to signal to the batter.

Is all communication forbidden? Or would they be allowed to communicate openly about trivial things? In the second case, they could have open, banal conversations in which a secret and subtle signal is used to emphasize certain words. In the terrible film Fortress 2, we learn of “an old Gulag trick”. The Soviets play chess and have a conversation about nothing important. But only the words spoken while touching the queen matter. So our protagonist says (this is from memory so not an exact quote) “You have a way with the pieces. Perhaps I should just shuttle them of the board. You have a way with words, but can we escape their meaning?”

If you listen only to the words spoken when touching the queen you get “You have a shuttle. Can we escape?”

After some Googling your unfamiliar acronym I assume it means this long dead sitcom:

How I Met Your Mother

How I Met Your Mother (often abbreviated as HIMYM) is an American sitcom, created by Craig Thomas and Carter Bays for CBS. The series, which ran from 2005 to 2014, follows the main character, Ted Mosby, and his group of friends in New York City's Manhattan. As a framing device, Ted, in the year 2030, recounts to his son, Luke, and daughter, Penny, the events from 2005 to 2013 that led him to meet their mother. How I Met Your Mother is a joint production by Bays & Thomas Productions and 20th Cen...

If the situation is preplanned you’ve got a lot more options. Simple gestures or words or touches could be prearranged to have specific larger meanings. But if you’re trying to have a general ad hoc conversation you’ve got a much larger problem.

That’s what I was thinking as well. Depending on the way the OP’s story is going, maybe that. For those that haven’t seen HIMYM, telepathy wasn’t really part of the show, it was a recurring joke that happened a handful of times over the entire series and was done strictly for laughs, it’s not like plot points were based on it. Also, within the show, you always have to remember that Ted is an unreliable narrator. 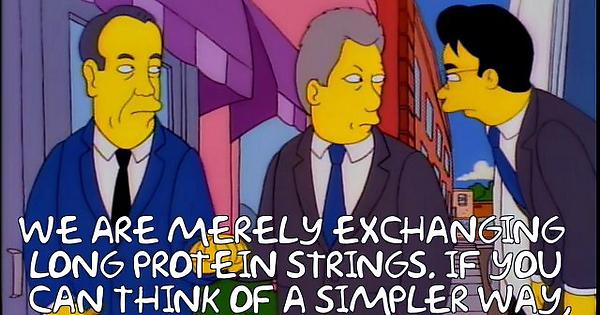 My friend used to finger-spell key words slowly, with his non-dominant hand, on his thigh below a table but where I was at an angle to see it. His visual attention and dominant hand were on the table, perhaps writing or taking notes on the really boring lecture.

People who know a shared signed language well can speak it to one another in such a small space, and with one hand, that other people do not notice anything is happening.

It does require that they know it ahead of time, and know it very well, though. It’s also very helpful for understanding if your conversation partners can make eye contact.

Does no one do semaphore with matchsticks anymore?
Hmmm, I was kidding but it might work. Or chopsticks? Or corners of a napkin?

It’s more about the content, although in some situations, the existence of extensive communication may also raise eyebrows.

I recall one Sherlock Holmes story in which a Greek-English interpreter was able to secretly ferret out some information from a captive because his captors knew only English and the captive spoke only Greek, and the interpreter was the only one who knew both languages. But this sort of thing becomes far harder if everyone knows the same language.

Almost 100% Foolproof way to Cheat in Exams? In My Humble Opinion (IMHO)

I thought I’d told this story before but I can’t seem to find it. My class at USAF pilot training included two Saudi Arabian student pilots. One was a real gentleman, a high quality guy. The other was a useless fatcat frat boy. Both had pretty good English; plenty enough for the job at hand. Each day began with all of us sitting in a classroom. An instructor would explain an inflight emergency scenario then call on somebody to respond. If you were called the drill was to leap to attention,…

You might find some other inspiration in the other posts of that thread. Not solving the same problem, but a related one.

Watching parents or aunts and uncles trying to get out of sticky social engagements as a kid taught me that prearranging a code is very helpful indeed. Any mention among the adults of “Aunt Jo” at a social functions was code for one of the kids to develop a severe tummy ache.

The child I raised was given two code phrases one meaning ‘things are fine’ the other meaning ‘get me outta here!’ They were actually meant for a Liam Neeson moment in Taken and thankfully were never needed. One of them was used far too frequently in this way: “Gary’s mom has asked me to stay for dinner and have liver! And guess what, their umbrella is dry!”

In addition, ironically just this morning I was reading my new copy of The Three Musketeers translated by Lawrence Ellsworth in chapter XLVIII A Family Affair when the protagonists were at the siege of La Rochelle and needed to communicate by letter and after several failed suggestions the poet, future churchman, and temporary Musketeer wrote the most innocent epistles which conveyed dire warnings and direct instructions in the words of small talk to minor characters who were superficially insignificant to the intrigue at hand and which would escape notice by even the most suspicious prosecutor.

I also seem to recall from decades ago that Twain had Tom and Huck hiding in a cave with desperate men who would and could do them harm if they were discovered. One boy had a horrible itch and the other a strong need to sneeze but escaped after what seemed like days of denying themselves the release they needed. I cannot help in that kind of situation, I am just not clever enough. But if ideas can be exchanged by characters talking to anyone other than who they NEED to communicate with there are a thousand devices. For example, the two friends fighting each other is overused and painfully transparent but could be adapted I would think.

If set in the modern era, texting or some manner of more subtle IMing on a mobile phone (maybe posting on a world renown internet forum based on a well known newspaper column) is surely the easiest way?

IF they’re especially smart folk given over to some mental mathematics, one of the minor plot points of “Cryptonomicon” by Neal Stephenson was two characters exchanging messages by way of a deck of cards. They were “just playing solitaire” but the sequences of cards could be used to encrypt very short messages (on the order of nine or ten characters).

A “game” of “solitaire” could take a goodly while this way, though.

Alternately, if there’s any dust on the floor, or even just assorted bits of straw or twigs, a person could communicate in braille by just appearing to fidget and scuffing a foot on the floor. (With straw or twigs: a vertically oriented bit is a raised bump, a horizontally-arranged one is a smooth bump.) If in danger of being discovered, it takes only a swipe of the foot to erase the evidence.

Whatever you choose, part of the fun will be showing that the characters know this form of communication… WITHOUT yelling “Chekhov’s Solitaire!” and making it clear that it’ll be used later.

We saw a movie where this was done well (we canNOT remember which one, sorry). A subtle comment about being in Boy Scouts together was enough for it to make sense an hour later that the characters would both know Morse Code.

The usual communication devices are unsuitable, unavailable, broken or under surveillance. What can a smart hero do? Morse code, of course! Make a noise, flash a light, or grab something convenient and start maniacally flipping it on and off.

There’s a Heinlein story where the characters “play a card game” that’s a cover for their covert communication.

Also, my students at yeshiva would write notes on the board for their secular exams using Hebrew letters, with a note in English from the “Hebrew teacher” asking the secular instructor not to erase the board.