I’ll start this monthly thread with an interesting question: is there ever a situation where a team would prefer a rainout and the make up 7 inning DH the next day. It is 4 fewer regulation innings for a tired bullpen plus a day off. A fan called Nationals Park to find out about a rain delay. She was surprised...

Michele Crowl just wanted some information about the status of a rain delay. She ended up talking to Dave Martinez for 20 minutes.

The scorching hot Kyle Schwarber leaves the game tonight with some sort of quad or hamstring injury rounding 1st. The Nats are already very thin and have no off days before the All Star Break

I’m delighted as a Blue Jays fan that Teoscar Hernandez was elected to start the All-Star Game, but as a baseball fan I concede he is not one of the three best choices by a long shot. I can think of several better choices.

Still, good for Teoscar. And the end of 2019 I’d have traded him for a bag of baseballs. He could hit homers but did nothing else well. Last year he started hitting much better but I kind of dismissed it because of the short season, and yet this year he’s continued to hit better in the same fashion. He’s also improved his defense by a truly astounding amount; when he started playing for the Jays he was probably the worst defensive outfielder I have ever seen Toronto employ on a full time basis, and he’s just light years better now - not especially good, but perfectly acceptable. He worked hard to improve and it paid off.

It’s a ‘significant’ hamstring strain for Kyle Schwarber so that miracle story is over for a while. That’s very unfortunate because this was certainly shaping up to be the best year he was ever going to have. He is likely to now miss some of the best weeks of his career.

Heres something else to chew on 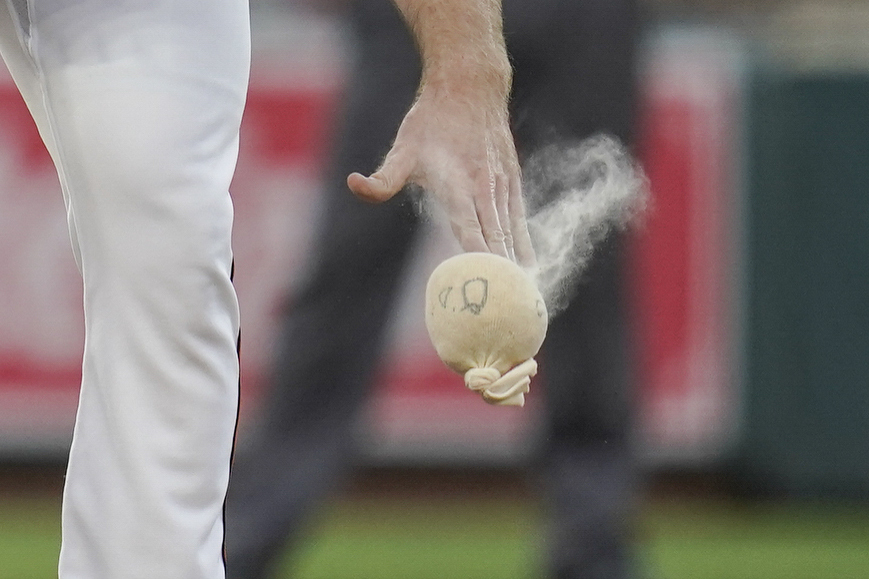 MLB cracked down on pitchers' use of sticky substances, but sources say the league is working on a long-term solution by creating a baseball with more consistent grip.

And the Cubs have lost 9 in a row. We definitely can’t call this season boring.

This just in: Jon Lester sucks!!!

I think he’s done. His peripheral stats are no longer consistent with a pitcher who can be successful in the major leagues.

Yeah, if the Nats didn’t have the massive injury bug, they’d be forced to either make Lester a long man and spot starter at best or just DFA him

Interesting proposal tonight during the Dodgers’ broadcast by Nomar Garciaparra: get rid of the runner on second in extra innings, if the game is still tied after the 11th the team with the least strikeouts wins.

I don’t like playing a different game to decide the winner but at least in this case it might help to make the game more interesting.

Well, okay, but let’s examine it.

Maybe more pertinently, though, is that I do not understand, and never have understood, the obsession with eliminating extra innings. Extra innings has never been a problem.

Daisuke Matsuzaka is finally retiring from professional baseball. Honestly, I didn’t know he was still playing in Japan. He gave us the gyroball and several years of mediocre to bad pitching. Probably the most frustrating pitcher I’ve ever had to root for, Dice had amazing control for a guy who could easily walk 8 batters in a game. It’s like no matter how many times he couldn’t get batters to chase or umpires to give him that extra inch off the plate, by Grabthar’s hammer, he will not throw a strike. It didn’t help that his windup was molasses slow and he took forever between pitches.

Yeah, a dumb idea, for reasons @RickJay said. Why not make it the team with the most hits, or the most men on base? Still dumb ideas, but slightly less dumb because they don’t so much change the incentives for how you play the rest of the game.

He gave us the gyroball and several years of mediocre to bad pitching.

He had a hell of a couple of first two seasons, but he got hurt in his third (actually, he was hurt before the season started.) Whaddya gonna do. It’s the fate of most pitchers.

Even in his best year, his second in MLB, his BB/9 was 5.0. I mean, his overall numbers were fine that year, but it was always a nightmare to actually watch him pitch a game.