Now that the Holidays are around the corner, I started waxing nostalgic for a model railroad around the ol’ tree. The problem is, I used to have some modelling skils, more to keep up with another hobby of mine–BattleTech specifically in the HO scale.

Throwing some random brain-drippings out there:

This might be a 2021 project, or maybe a 2022 one. I’m kind of curious how labor intensive but fun it would be to set up an HO scale loop again for ~ $250, knowing it’ll be used again and again. Any thoughts?

You only want a seasonal layout? Forget DCC. That’s for complex tracks, multiple trains running on the same tracks, and mutli-loco lashups. Plus, it’s way too expensive. And you need a special controller.

Old school is the way to go. If you’re just making a loop, maybe a siding or two, you can just use the transformer.

Plywood is OK, but they do make “ballasted” snap together track that is good for temporary layout. Keeps it off the ground.

You can, of course, buy a set. Hobby stores LOVE to sell trainsets near Christmas. But that limits you.

Are you in a city with a good model railroad base? The hobby stores can sell exactly what you want with no extras. Want a train with all the same kind of cars, or from the same line? You won’t get it in a set, but you can piecemeal.

You can go simple or complex on locos. Anywhere from $50 Atlas that gets to job done, to a $600 full DCC and independently-controllable lights, sound, and superdetailing, with the engineer sitting in there (and he’s a member of the Brotherhood, too) little gem of a locomotive that will make you believe it is real.

And buildings! This is the golden era for availability of buildings. Pretty much whatever you want, there’s one out there. (note: may not be cheap!)

And buildings! This is the golden era for availability of buildings. Pretty much whatever you want, there’s one out there. (note: may not be cheap!)

In fact, there might be exactly one out there, that was exactly zero before you ordered it. There are a lot of folks doing 3D printing for model railroad layouts. And some of those folks will make designs of everything they can think of, and only print when someone orders one.

Ages ago, the local fire department assembled their Xmas railroad “garden.” Quite nice; the thing that bowled me over: this was about the time E.T. came out on video and they had taken a small TV (5" screen) and sunk it back into the hillside terrain and put little cars in front of it facing the TV – a drive-in theater!

The Future is Now! And available in stores near you. 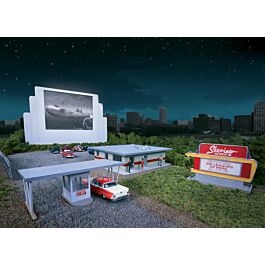 The Walthers Cornerstone Skyview Drive-In Theater brings the big screen to your layout. This easy-to-build plastic kit features a big screen designed for mounting your favorite 7" tablet so you can play movies at your layout's drive-in. The kit also...

I can hear people under 40 exclaiming What’s a drive-in theater?

Aw rock on! Thanks for the advice! Before I go on, I should correct one thing. . .

Having an old Windows 10 laptop

Unfortunately, this town doesn’t have a good base for sales of much by way of hobby items–have to go to Santa Fe for the nearest hobby store. I do want to look into custom-made buildings though, since this town has a few historic ones that I might get made as years go by (add one per year!).

Aw man, this is encouraging. I think I might take your advice with that Snap Track, @Just_Asking_Questions !

Tripler
Take a wild guess which major rail line my locomotive’ll be from.

Did it win a Best Song Oscar? Did Judy Garland sing about it? Where the hell is Atchison?

I’d been into model trains as a kid (mostly Lionel O27, but also some HO and N); last year, in the early days of the pandemic, I got back into it, with N scale.

I haven’t built an actual layout yet, but the ballasted snap-track is definitely the way to go for a simple layout. I bought a Kato boxed set, which had an oval of track, the transformer, and a train; I’ve since bought more track, and several more locomotives and cars. It can all go up in 10 minutes, and come back down as quickly.

Kato make their modular “Unitrack” in HO scale, too; several other manufacturers (including Atlas, which was previously mentioned by @Just_Asking_Questions, and Bachmann) make similar modular track that’s pre-mounted on a faux-ballast roadbed.

I also agree that you don’t need DCC at this point; if you think you might in the future, some locomotives are sold as “DCC ready” (i.e., they have a port for the installation of a DCC controller).

There are a ton of online hobby shops that specialize in trains; I’ve had very good experiences with several of them, including ModelTrainStuff.com, TrainLife.com, MidwestModelRR.com, and Trainworld.com.

Edit: I’ve been focusing on railroads from the Midwest, particularly those from the 1960s and 1970s, when I was growing up (Burlington Route/Burlington Northern, Milwaukee Road, Chicago and North Western), though that initial train set I bought was a Metra commuter train – the same type of train I took to work every day, pre-COVID.

When I retired, I bought myself a model railway that ran round three walls of my spare bedroom.
A carpenter put up shelves with supporting brackets and a friend of mine actually laid the track.

I recommend Bachmann for the locomotives + rolling stock, Hornby for decoration and Peco for the track.

you’ll see my railway in action.

I think the HO scale is a very practical one, especially for a tabletop layout. I had two HO-scale trains as a kid, with a steam locomotive and a diesel. My dad built a large plywood table in the basement, and we built a fairly elaborate layout. I remember it partially running on two levels, with a trestle system to get from one to the other and a big railway bridge.

What I’ll add here though – just as a wild idea – is that the LGB “G” scale is really fantastic, though you need to have a lot of space, and a lot of money to throw around if you seriously get into it. But they make beautiful stuff in 1:22.5 scale, which means it’s pretty big, and often fantastically detailed. The track is outdoor-safe and many enthusiasts even have layouts running through their back yards.

I myself don’t have the aforementioned “a lot of money to throw around”, but I did get into it in a small way when my son was fairly young and very interested in such things. Turns out, Playmobil at that time made a G-scale train set for kids that was fully compatible with LGB tracks and products. I am not of course suggesting that this is what you should have, and I don’t think they even make it any more, just explaining how I got into it. So I got him a Playmobil G-scale train set for Christmas and a whole bunch of extra LGB track, and we built a railway on the floor that covered his entire bedroom and ran out into the hallway. This piqued my interest in LGB and I ended up getting a bunch of actual LGB cars and other accessories just for my own amusement as much as for his. The link above (or below) leads to their current and past catalogs, which are a delight to browse. I had a big hardcopy LGB catalog back then that I loved leafing through.

I should add, as a point of information, that it appears (unknown to me when I wrote the above) that there have been big changes in LGB since I last had anything to do with them. Apparently they filed for bankruptcy in 2007, and were then taken over by another German company, Marklin, which itself faces an uncertain future. There has not been a new LGB catalog produced since 2019. There has also been a trademark dispute between Marklin and the US division of LGB. It’s all very sad. When I got my son’s Playmobil set many years ago, there was a hobby store in town whose owner was a super-enthusiastic LGB fan. The store had many LGB displays and sold a large assortment of their products, which is where I got most of mine.

I recommend Bachmann for the locomotives + rolling stock, Hornby for decoration and Peco for the track.

@glee, you’re in the UK, if I remember correctly?

If so, for the OP, Hornby and Peco are UK manufacturers, and my understanding is that their products aren’t always as widely available here in the U.S. (though it looks like Hornby, at least, has a US version of their website).

I wanted to pop in again and thank you all for the help!

Looking at the Atlas website, which I had ordered from before, that the True-Track starter kit seems the way to go for the seasonal layout, until I build up some expertise. And @burpo_the_wonder_mutt and @Kropotkin, I would have chosen Canadian Northern if I were still up in North Dakota, but now that I live only 35 miles from it, I simply have to go with Santa Fe livery. Sorry, I’m unfamiliar with any Judy Garland songs…

This also raises a question: Walthers still seems to be around. Anyone use them for locomotives or rolling stock? They seem a little expensive. . .

Tripler
4 1/2 years of Engineering school, and now I’m finally getting to drive a train.

The Oscar-winning song is, On the Atchison, Topeka and the Santa Fe, sung by Judy Garland from the movie The Harvey Girls (1946). You should begin to stockpile railroad factoids, songs, anecdotes and folklore; you’re going to need it.

I have a T-shirt from the Rosenberg (TX) Railroad Museum with THIS on the back and you wouldn’t believe the number of total strangers that tap me on the shoulder to comment on it. FUN!!

That is, indeed, fantastic. I’ve seen portable DVD players used for that purpose, but as soon as I saw my first tablet I knew that someone would do something like this eventually. I do some Lionel stuff but have never gotten into HO.

This also raises a question: Walthers still seems to be around. Anyone use them for locomotives or rolling stock? They seem a little expensive. . .

I’ve run into a few issues with less-expensive brands of rolling stock (some Atlas and Bachmann ones), where they just aren’t good quality – the trucks are misaligned, the coupler doesn’t work right, etc. To that end, I now generally am willing to pay a little more for the brands that I trust.

Here’s a video I did on my Lionel layout a while back. Just put my Canon camera in a gondola car and let it rip. (As a bonus you get to see my messy basement.) 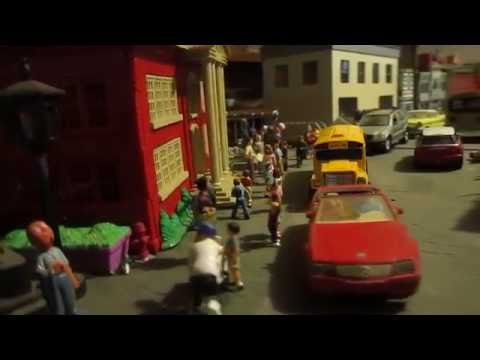