We’ve done the best and worst cover versions, but what’s in the totally opposite direction?

Señor Coconut is a latin mambo type band. Their cover of Kraftwerk’s Showroom Dummies is … odd

My vote, however, goes to this classic cover of Led Zeppelin :eek: 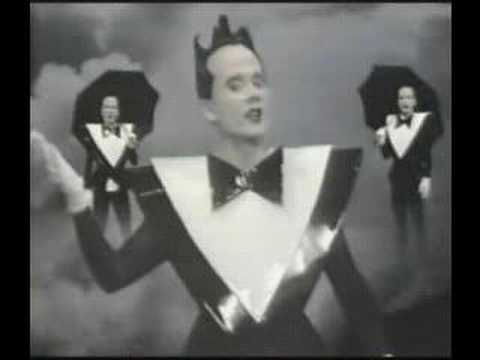 Can’t find it on Youtube, but there’s a band called Luther Wright and The Wrongs that does a Bluegrass version of the entire elbum The Wall.

Carnival in Coal’s extreme metal covers of “Maniac” and “Yes, We Have No Bananas Today” are pretty far out there–not as far as their easy listening cover of Pantera’s “Fucking Hostile”, but that’s not online.

It’s more of an advert than a proper cover version, but I give you Sweet Child of Mine…

It’s actually an ad for an Indian music channel, but it’s hilarious.

And I guess it’s cheating but Adam Hills doing The Australian National Anthem to the tune of Jimmy Barnes’s Working Class Man.

Richard Cheese doing Gin and Juice. In fact, anything by Richard Cheese. (Sorry the video is crappy, even by Youtube standards.)

It is more of self-publishing but this 85 year old English woman does indeed produce some of the most bizarre cover versions around…hundreds of them as a matter of fact.

Here is a cover of the Chef song from South Park.

Thnaks for the link- I haven’t seen that in ages. What a voice!

Once again, I point to Mrs. Miller

But my first choice is Lol Coxhill’s I am the Walrus (You can listen to it in Real format here. Scroll down.

The Swingle Singers - “Drive my car”
http://www.youtube.com/watch?v=gJSxKoOsza4
They are very proffessional, and talented, but this is still bizarre.

He’s best known for this, and a great version it is too
http://www.youtube.com/watch?v=Vy1ueZf1WMQ

He took his musicianship very seriously, they could do this live - Wonder what he’s doing now

Liberace - You don’t bring me flowers
http://www.youtube.com/watch?v=mND-hQQqHg8
Kind of sweet sad vidd though

Bizarre covers need to be unexpected, preferably by well known artists making a proper attempt, otherwise any old klutz can knock out something weird.
That Klaus Nomi one is well…strange.

Tomoyasu Hotei (probably best known from their song “Battle Without Honor or Humanity” that started off being used in Kill Bill and now has spread like crazy for theme music) has an interesting version of Immigrant Song. It’s probably not fair to call it a cover; to call it a remix would probably be more accurate. I think the video is actually a mash-up someone did with scenes from Valkyrie Profile, but the music is right.

From a similar source (I mean the Kill Bill soundtrack,) there’s Santa Esmeralda’s cover of Don’t Let Me Be Misunderstood.

Does it really count if you’re covering what’s basically a novelty song (Chocolate Salty Balls) or what’s already acknowledged to be a bizarre song (I Am the Walrus)?

My vote, however, goes to this classic cover of Led Zeppelin :eek:

How about this cover?

How about this cover?

The A Mighty Wind soundtrack has a cover of the Rolling Stone’s Start Me Up by The Folksmen (Michael McKean, Christopher Guest and Harry Shearer (also known as Spinal Tap)). Rather odd song for a folk trio.

I’m not sure if this belongs in “The Worst” thread or this one, but Bono’s version of “Halleluiah” on “Tower Of Song - The Songs of Leonard Cohen” has bizarreness in spades. Too bad because Halleluiah is arguably Cohen’s greatest song and Bono’s treatment is unlistenable. If you check out the sample in my link, be assured that you are NOT listening to a weird techno intro or interlude - the entire song sounds the same.

All aboard the disco train!