Movies with the statue-with-a-broken-off-penis motif

Sitting here watching “The Wedding Planner” and the characters are trying to pick out a statue to grace the reception. They argue the merits of a naked male and his penis becomes detached during the deliberations. Wacky zany humor ensues.

Which brings to mind the movie “Heartbreakers”, also containing a penis-breaking-off-the-statue scene (I’m in a phase requiring undemanding mediocre movies).

Is this a full-fledged movie cliche? How many other examples can you come up with?

Though not quite a broken-off-penis joke, My Best Friend’s Wedding draws humor from an ice sculpture of Michaelangelo’s David.

If the list can encompass TV shows as well as movies, one episode of Bob and Margaret features the title couple visiting a couple who own an anatomically correct statue. Margaret stashes the broken penis in her purse, and hilarity ensues.

There was a scene in the Naked Gun the movie were Lt. Dreban breaks the penis off of a statue.

And in Goonies where the fat kid breaks the penis off of the small statue and they try to glue it back.

Dragnet had a statue get its penis shot off during the big gunfight at the end.

I was going to mention the Goonies as well, but I’m glad to hear someone else mentioned it. It always saddens me to find out people of my own generation never saw that film.

I know there’s more, but as of right now, I just can’t think of any.

In Meet Wally Sparks Rodney Dangerfield breaks off a statue’s penis, puts it in his pocket so it looks like he has a 12" boner, and proceeds to “dry-sodomize” David Ogden Stiers. And you thought “Battleship Potemkin” had some great scenes.

You talk crazy **El Elvis Rojo
** Goonies is one of those films that everyone thinks is their own discovery, but is thought the same by everyone else.

Jeez, Goonies came out when I was about 8 or 9 and everybody and his mother loved it back then. I always assumed it was really really popular because it was all my friends and I talked about for months.

In the comedy Nothing To Lose there is a misguided revenge scene involving this same schtick. I keep thinking there is a Mel Brooks film with this as well, but all I can come up with is the eunuch scene in History Of The World Part I.

I once saw a foreign commercial on a commercial special for rubber cement with this theme.

A penis falls off a statue. A nun uses rubber cement to put it back. Later, another nun notices the penis is pointing upwards, and twists it correctly.

I once saw a foreign commercial on a commercial special for rubber cement with this theme.

A penis falls off a statue. A nun uses rubber cement to put it back. Later, another nun notices the penis is pointing upwards, and twists it correctly. 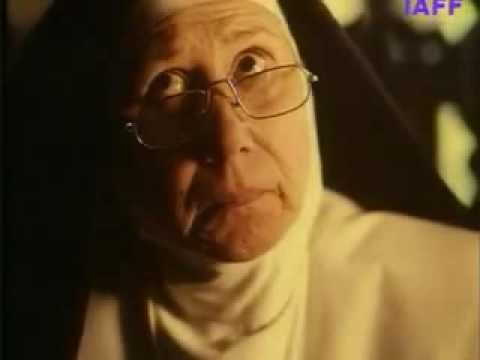 “La Cage Aux Folles” has a funny moment with a statue’s member being knocked off.

One of the funniest movies ever made, by the way. Even as it makes fun of the characters, it treats them with respect and is never looking down on them. I’ll never forget when my wife and I had my mother watch it with us. She started out hooting and hee-hawing at all the flaming gays and transvestites.

But in the second half of the picture, when Albin is wandering around after having had his heart broken by Renato’s incredibly callous son, my Mom the gaybasher was sitting there with tears in her eyes, softly saying to herself “poor thing.”

Breakthrough! The strange object of ridicule had become a loving, feeling human being she could empathize with.

YOU CAN OPEN YOUR EYES NOW
Anyway, I love this movie, and there’s a funny broken statue dick joke in it.

Don’t really think of that as a movie trope, but I guess is has come up (ahem) now and then.

When my sister was on a exchange-student program in Mexico City in the Seventies, she and her friends went to a raucous bar. In the lady’s room was a large replica of Michaelangelo’s David, with a big sign in both Spanish and English saying, “Don’t lift the leaf!” Of course sooner or later some curious young lady would… thereby triggering a siren and flashing lights out in the main part of the bar. She would then emerge from the ladies’ room to hoots and cheers from the other patrons, who knew exactly what had just happened.