The buckteeth reminds me of Sponge Bob. I fully support any campaign that helps raise awareness for testicular cancer.

Now, can I get my picture taken with Mr. Balls? 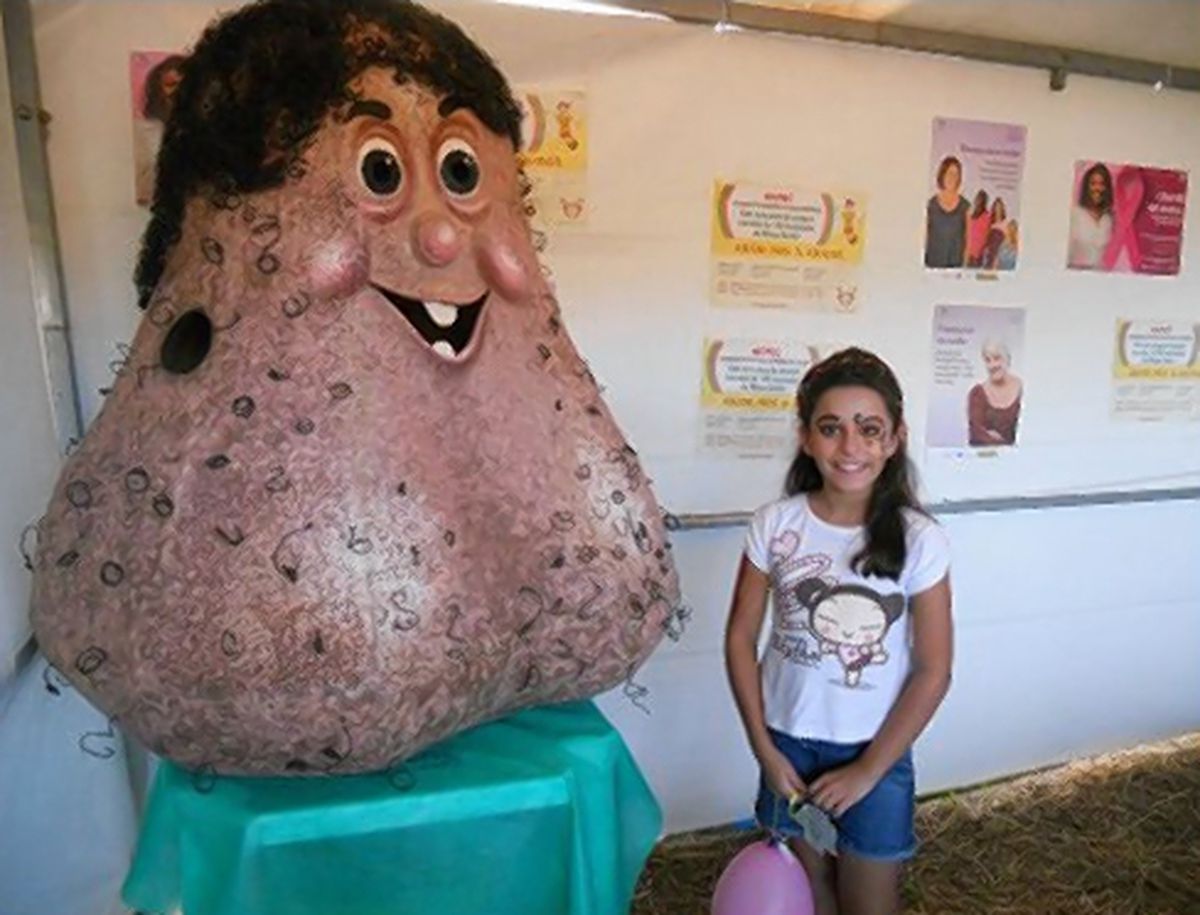 At first blush, the mascot's name is rather endearing: Mr. Balls. But for those who might find that descriptive title offensive, the scrotum-shaped character also answers to "Senhor Testiculo" in Brazil, where he is a spokes-thing for a group that is...

An important mission, granted, and the rather graphic creation sponsored by Brazil’s Association of Personal Assistance for Cancer has done its job by propelling the issue into the media spotlight.

“Both children and adults loved taking pictures with the mascot, a friendly snowman in the shape of testicle,” says the non-profit organization’s website.

There are some places where teeth should never be. :eek:

The buckteeth reminds me of Sponge Bob. I fully support any campaign that helps raise awareness for testicular cancer.

Now, can I get my picture taken with Mr. Balls?

If there ever was a pic that made me stop and say “oh.my.god.” it would be that. Especially with the perky little kid standing next to Mr. B.

I suspect he’ll feel inspired to bring Mr. B to the U.S.!!

Some stuff you just can’t make up.

What I want to know is why does his hair (on his “head”) have bald spots? Does he have mange? Did they run outa pubs? Inquiring minds want to know.

I almost applied to drive the Wienermobile for one summer, thinking it would be cool to have on the resume’. This thing? Career gold I tells ya.

Some stuff you just can’t make up.

What I want to know is why does his hair (on his “head”) have bald spots?

He moonlights as Mr. Bald.

Are we sure nydailynews is not a parody site?

Just so long as he realizes that ever so often a young boy or older woman is going to run up and kick him.

Does he look bigger when he shaves?

His nose seems a little short.

Assuming he is the one on the left.

Are we sure nydailynews is not a parody site?

The New York Daily News is a real newspaper. Its quality has declined drasticly in recentr years, but it is not a parody site.

Brazil’s Association of Personal Assistance for Cancer likens Mr. Balls to a ‘friendly snowman’ beloved by children and adults.

“You’ve gotta be nuts to take that job” was never so true.

If he’s got any sense he will stay far away from football fields, soccer games, and golf courses.

And he better not scratch up that costume either.

THAT is one of the most grotesque looking things I have seen. Granted it’s in a good cause, but did they HAVE to make it so nubbly and hairy? This is one of those times when I think abstraction would be a blessing.

Just wait until Senhor Douglas and Catherine Zeta Jones unleash the mascot for THEIR cause.

Another article. I didn’t realize there was a connection between steroid use and testicular cancer.

His name: Senhor Testiculo, AKA Mr Balls. His mission: to save Brazilians from testicular cancer, and also to cause amusement by running up to steroid abusers and screaming “YOU KILLED ME!!!”

The mascot, quite literally a huge pair of testicles, recently made a pubic, sorry public, appearance at an event run by the Associação de Assistência às Pessoas in Viçosa, Brazil.

Well, there’s my sleep gone for the next two nights.

He might make a pretty good Doctor Who villain though.

Yep, I find that pretty terrifying.

Q: Why does that child have large pubic hairs on her face?

How is it not disturbing to see a little girl standing next to a giant, hairy scrotum?