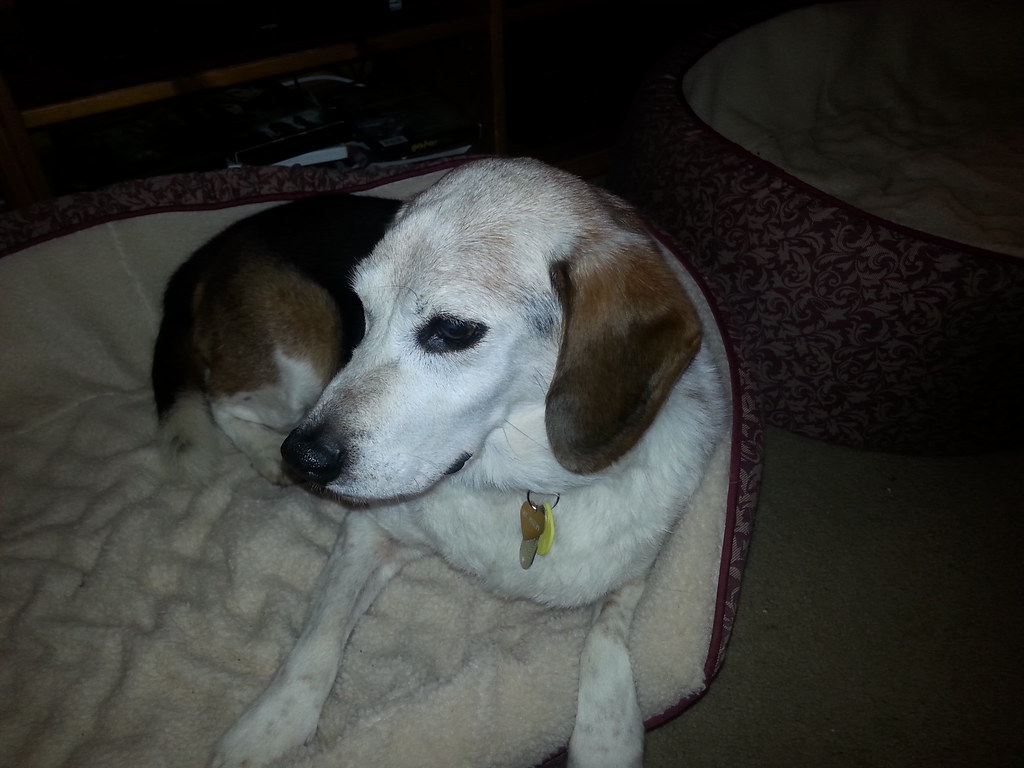 Couple of things upfront…posting from a phone in the hospital waiting room, will have to be terse. And to understand the whole situation, you should know that we lost our beloved dog Sadie July 30, 5 months ago, to a suddenly-diagnosed tumor. I have been unable to post about that loss, suffice to say we were hollowed out.

Just over two weeks ago, dropping off some extra pet supplies at the county shelter, we made the mistake of going inside “for a look.” Despite various bright-eyed youngsters vying for our attention, an elderly beagle caught my wife’s eye. He was listed as being 12 years old, but seemed much older. Very calm, sort of vaguely impaired – either his senses or his cognition. But we just wanted him to have as good a life as might be granted to him. We were stunned to seein his medical records that he’s been bounced around between shelters since 2010 – at least four years in the shelter system!

And so I returned a few days later and adopted the dog we named Mr. Rogers. His initial vet visit revealed anemia, cause unknown, and bad teeth, and a sensitive disk in his back. He managed to fit into the family well, getting along with our other dog, Simone, mostly by ignoring her. The cat, Lefty, reacted with bored didain…“Of COURSE you brought home a dog,” he seemed to sneer.

Mr. Rogers turned out to have a good appetite, eating anything we offered, and he liked the big thick orthopedic beds we have left over from Sadie. But his favorite thing was walking. Despite some arthritis and wasting in his back legs, abd his poor senses, he loved to pace along sedately right behind me as often as I took him out…which has been pretty often, given his small bladder. Yes, he tries to tell us when he needs to pee, but he’s on a very short timer so if I hesitate in jumping up, well, it’s too late. We understand old age ain’t for sissies, and we have a big bottle of white vinegar.

We don’t do much to celebrate Christmas, but we do have family over. We were excited to get to introduce Mr. Rogers to my relatives. But a few days before Christmas, Mr. Rogers started being very picky about food. By Christmas Eve, Mr. R stopped eating entirely.

All day Christmas, we tried to find something he’d eat. Nothing – he even turned his head away from chicken broth.

And today nothing either. He was restless, even unwilling to lie down, getting up frequently to wander around listlessly. But he was drinking fine and wilng to walk.

And so we are at the vet. Diagnosis: a huge mass in his spleen. A “cavitated” tumor. This explains the anemia…he’s been gradually bleeding to death. But anemia also might be the trouble with his cognition – by starving his brain of oxygen, it can make him vague and slow.

What to do with an old dog facing major surgery? Time to fight for him, or to let go gently?

While we love him, he’s so new to the family, and so “not quite there,” that we’re not so emotionally bound up in the moment…we can at least try to be objective.

Well, the thing is, the anemia. If fixing the bleeding might bring him out of his mental fugue, he mightnit seem so…OLD. It’s still a crapshoot…if the tumor is benign, he might have a few good years left. If malignant, six months to a week, and maybe not so good.

In a lucky break, I renewed his pet insurance before this diagnosis. It’s not the best coverage, but we haven’t had any in the past, and only got this (it’s hard to insure an old dog!) with the adoption process. It will go a long way to defray the costs involved.

And so here I am, waiting late in the animal hospital. While I’ve been posting this, he’s been in surgery. Maybe it’s a waste of money. Maybe it’s just torturing him unnecessarily. But maybe it’s a second chance for Christmas.

They just told me he’s out of surgery. The spleen is out. Prognosis unknown, but they found nothing else bad.

Oh. Hang in there Mr. Rogers. You too Sailboat.

Merry Christmas, Sailboat. Your dear ones are lucky to have you.

Hang tough. It is hard but they depend on us to make those choices. He is a luck dog and I’m sure he has enriched your life.

I’m thinking good thoughts and hoping hard for you. If things don’t go well, you’ve done a wonderful thing by giving him a home at the end. Warm, comfy bed, family, walks, and food.

The doc removed his spleen – and a blood clot that, judging from the doctor’s hand motions, was about the size of a baseball. No one knows how long he’s been bleeding into his abdomen.

He’s been home now for about 2 hours, resting uncomfortably. He is SO tired. He did surprise me by lifting his head once, but he’s otherwise been completely inert. His temp is good, I just took it.

First of all, thank you for taking a chance on a senior dog. Nothing breaks my heart more than when older dogs end up at the shelter where I volunteer.

I’m so glad to hear he’s home and resting comfortably. I’m saying a prayer for Mr. Rogers to heal quickly and go on to have a wonderful life with you and your family. 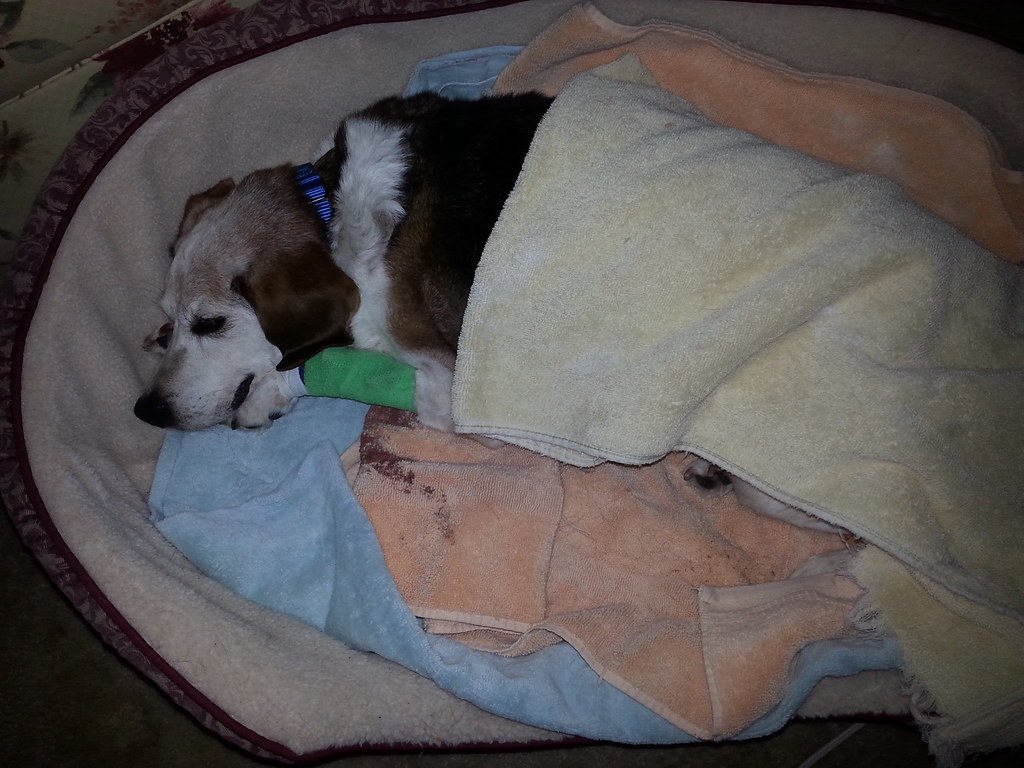 Here he is, toughing it out. The splash of blood on the towel is from the surgery, not new bleeding.

Here he is, toughing it out. The splash of blood on the towel is from the surgery, not new bleeding.

OMG! He is totally precious! Give him a pet from me.

Thank you, thank you.

Here’s a photo my wife took before the surgery that shows Mr. Rogers’ personality a little bit.

Mr. Rogers has gone out a couple of times and sprinkled the sidewalk a little, and he’s moved around the house, lying down in the orthopedic\c beds but also sprawling on the floor in corners and denlike areas, and in the warm spot of sunlight on the living room carpet. I am happy to see him raising his head, sitting up, and shuffling around a little. But he hasn’t eaten yet! Still! And he had a good appetite when we first brought him home.

We just got back from the pet store with some different foods and a syringe for trying a force feeding. I don’t want to bother him, but he has to eat eventually.

Mr. Rogers didn’t enjoy the syringe feeding, but he has nutrition inside now…and his meds, thanks to my wife’s efforts.

He seems to be perhaps a shade more alert. He’s gotten up to wander around a few times.

And so there is no happy ending for Mr. Rogers. He spent AT LEAST four years in the shelter system before we brought him home…but the entire time we had him he was slowly bleeding to death internally.

We put him through the surgery because there seemed to be a chance he’d recover and have some good years. We force fed him and medicated him and did other things he didn’t like. He threw up the force feeding about 3 hours afterward.

And about 30 minutes ago he passed quietly in his sleep.

I thought he was dozing, but he suddenly voided his bowels. I jumped up and tried to revive him, but he was quite gone. There’s no sign of anything wrong at the incision.

Goodnight, old man. Humans made you wholly their creature and you spent your whole life at their dubious mercy. In between the mental fog caused by age and blood loss and the pains of old age and surgery, did you even get to recognize you were loved?

Oh no. I was just reading this hoping to read that he was doing better.
You did right by Mr Rogers.
RIP old man, you were indeed loved at the end.
((Sailboat family.))
(My monitor is fogging up. My last great dog died of an untreatable mass in his spleen.)

I am so sorry for your loss; you did a wonderful thing for Mr. Rogers. He had A HOME, however briefly. Good for you. And him.

He knew he was loved in the end. You can tell by his face in the pictures you posted. You did the most amazing thing for him, just making sure his last days were not in a shelter.

I’m so sorry. You did good by him, though. In his last days he was warm and loved.

Thanks to you and your family for bringing some peace and comfort to and old boy at the end of his life. You are great people.