I don’t see another thread on this and it definitely seems to be worth discussing. It seems to be getting even less press than the LIBOR thing. 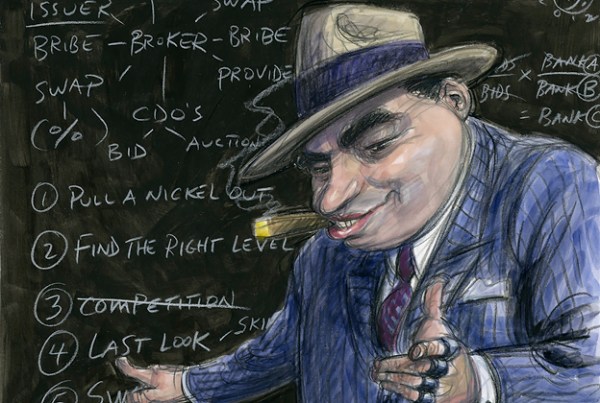 The Scam Wall Street Learned From the Mafia

The defendants in the case – Dominick Carollo, Steven Goldberg and Peter Grimm – worked for GE Capital, the finance arm of General Electric. Along with virtually every major bank and finance company on Wall Street – not just GE, but J.P. Morgan Chase, Bank of America, UBS, Lehman Brothers, Bear Stearns, Wachovia and more – these three Wall Street wiseguys spent the past decade taking part in a breathtakingly broad scheme to skim billions of dollars from the coffers of cities and small towns across America. The banks achieved this gigantic rip-off by secretly colluding to rig the public bids on municipal bonds, a business worth $3.7 trillion. By conspiring to lower the interest rates that towns earn on these investments, the banks systematically stole from schools, hospitals, libraries and nursing homes – from “virtually every state, district and territory in the United States,” according to one settlement. And they did it so cleverly that the victims never even knew they were being cheated. No thumbs were broken, and nobody ended up in a landfill in New Jersey, but money disappeared, lots and lots of it, and its manner of disappearance had a familiar name: organized crime.

What the hell can you trust anymore?

That sounds fishy. It’s true that if the interest rates are artificially low, investors in those bonds get ripped off. However, who benefits? Municipal governments, who pay lower interest to borrow. If you follow the money, that means the government is likely the culprit.

That sounds fishy. It’s true that if the interest rates are artificially low, investors in those bonds get ripped off. However, who benefits? Municipal governments, who pay lower interest to borrow. If you follow the money, that means the government is likely the culprit.

No. You’re misunderstanding what happened. It’s a long article, I know.

A municipal government has a bond issue for some large infrastructure project; let’s say a bridge. They sell all of the bonds and have the money they need. The project will take a couple of years to complete so they won’t be spending the money all at once.

So what do they do with the money that’s sitting there waiting to be spent? They take bids from various banks and deposit it in the one offering the best rate so that it’s earning interest while waiting to be spent. That way they get back some of the interest they’re paying to the bond investors.

This is what the banks were rigging. They would work together to keep down the rates they paid to the municipalities for these funds.

And by “work together” he means bribe the people running the auction to tell them what to bid. Which was recorded on wiretaps.

There were also a number of political payoffs outed in courts as well - I believe Bill Richardson was implicated somehow.

Oh, okay, so not muni bonds as investors understand them. I wasn’t aware that municipalities did that.