My life as a DeadHead

So, I’m a Newbury Comics today. Kids wanted to go. I figure I’m going to get something, but I don’t know what. There’s nothing new by Mike Oldfield. Roy Wood is only available as an import. Jethro Tull … well, I just can’t get interested tonight. The Grateful Dead …

I had said in another thread that it wouldn’t take much to turn me into a deadhead so, what the hell, I think. Gotta start somewhere. But there is a lot to choose from so I figure, might as well start at the beginning.

Did I do good?

Good choice! Did you know that Big River is actually a Johnny Cash cover?

*Originally posted by hajario *
Good choice! Did you know that Big River is actually a Johnny Cash cover?

Yep, I knew that. I’ve heard the Cash version and another Dead version on one of their live WB releases (I think) but this one os a hell of a lot better.

#1 has my favorite rendition of “Here Comes Sunshine.” FWIW, #2, 8 and 11 are my favorite Dick’s Picks. I also recommend Europe '72 to beginners.

Second “Here Comes Sunshine.” That one song is worth the price of the disc.

If you’re interested, next time you are in a Barnes and Noble or other big book store, see if they have one of the Grateful Dead Taping Compendiums and take a look, they are fascinating. 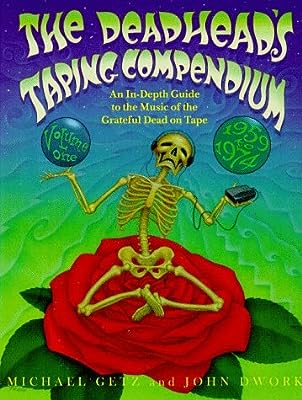 The Deadhead's Taping Compendium, Volume 1: An In-Depth Guide to the Music of the Grateful Dead on Tape, 1959-1974

If you want to get a taste of what a dead concert was like, see the http://www.darkstarorchestra.net I’ve seen them three times and will see them every time they come to NYC! Friday’s show at the World (yes the WWE place) 11/29/02 was one of the best concerts I’ve ever been to, and I’ve seen 50+ Dead shows!

My first Dead album was Without a Net, and it really made me a fan. It’s really pretty tight and has a lot of their more epic material; I like the Brent Mydland era band because he really made the background vocals great (and of course he was a fine keyboardist).

The best studio album is widely believed to be Blues For Allah.

Europe '72 hooked me. A lot depends on which type of Dead you enjoy most. As mentioned earlier, Reckoning is a wonderful album and it emphasizes the traditional/country side of the dead.

A couple of my favorite tapes are the Kesey’s Farm show and a Fillmore East show from 2/13/70.

Welcome to the club.

We’ll be teaching you the secret handshake and how to do the hippy-dippy as soon as we can find a pack of matches and some rolling papers.

“The best studio album is widely believed to be Blues For Allah.”

I don’t know how widely that’s believed. My favorite quote re: Blues for Allah:

JG: “Yeah, this new album, we spent a whole bunch of time on it, which is really backward from how we work. This time, we went in with absolutely no preconceived notions and just worked material up in the studio. I think it has taken us about 6 months to do it.”

JG: “Well, let me rephrase that…we spent five and a half months trying to figure out what do do first, and two weeks recording the damn thing.”

My vote for best studio work goes to either Wake of the Flood or Mars Hotel. Anthem of the Sun would take it, but that is so heavily based on tapes of shows that it gets kicked out of the running.

I’m with plnnr on Wake of the Flood being the coolest studio release…At the Mars Hotel has some clunkers on it, even though “Scarlet Begonias” and “U.S. Blues” make up for them, not to mention the great backwards-message “Ugly Roomers” graphics… and with Frank and Dooku on the absolute necessity of getting a copy of Europe '72.

That said, you could have done much worse than Dick’s Picks Volume One. That IS a damn fine “Here Comes Sunshine,” and is, I believe, the only commercially available live version of that tune at ALL.

THAT said, I was actually thinking about you the other day, while I was listening to Dick’s Picks Volume Four, the Valentine’s Day show at the Fillmore East in 1970. “THIS is the disc Euty should be gettin’ for himself,” I thought.

Introductory remarks by Zacherle (whoa!)…half-hour take on “Dark Star” that starts out hot, then wanders beautifully into the Allman Bros.'s “Mountain Jam” (the Allmans were also on the program that night, and I guess the boys wanted to toss 'em a little bone), then comes back around to “Dark Star”…a wonderful “Alligator”…and a rare live perf of “Mason’s Children,” possibly the weirdest Dead song ever, never made it onto a studio recording, always sounded to me like a tribute to Charles Manson even though nobody admits it.