She’d been hopping around the office all week, shortly after I blundered across her picture on the web: 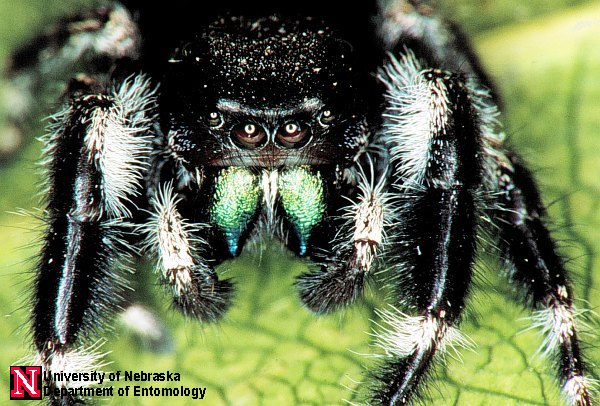 Friday she was on my desk and was trying to get into the PC box.
Saturday I found her at the bottom of the killifish aquarium.
Damn, she was cute.

Is that a wolf spider? Too bad she got drowned. Spiders are a good thing.

Yeah. I was hoping she would eat some of the roaches.

Gaaa! Ya know, would it have killed you to label that link "WARNING: REALLY EFFING CREEPY-ASS IMAGE - NIGHTMARES TO FOLLOW"?? :eek:

Oh…and I’m sorry to hear about your loss.

That spider is creepy!

OHH that is a very impressive spider.

A very large (though not so hairy) spider has come to live behind the cold tap in our bath/shower. Fortunately we don’t use the bath so we don’t have to go near the tap but a week ago he fell in the bath and I only noticed after the shower was on. I had two options a) pretend I didn’t see him and hope he went down the drain (he couldn’t climb up the slippery bath wall…and he was really TRYING) or b) turn off the shower and rescue him.

I am easily guilted and his sorry attempts to climb up the wet bath wall made me take option b.

I turned the shower off, wrapped myself in a towel and yelled to the child to bring me a piece of paper. I caught mr/mrs spider in the paper, chucked him/her out the window and finished my shower.

The next morning it was back behind the tap! Some spiders show no gratitude. If he/she falls in the bath again I will consider the drain option.

For now I just keep an eye on him/her as I scrub.

I’m not much of a spider lover, however, I must admit that I like those little jumping spiders.

I don’t know what it is about them…they seem so intelligent and interested in what’s going on around them. I had one once that sat on the edge of the aquarium and watched me do a water change. I even rescued her/him bare-handed when she/he nearly became fish food! There’s just something cute about them.

Good GOD man… you should have crushed that thing right off!! I’m sure it was plotting to kill you anyway!

oh yeah… and rest in pieces… or something.

Combining the worst of both worlds… clowns and spiders.
:eek:

You know, you’re right about the eyes. All eight of them.

You know, normally, I like spiders. It’s just that recently I had a dream where my room was infested with Cthulian spiders that had tentacles instead of legs. Big, plump, endlessly moving tentacles. Brown Recluse Tentacled Spiders. Lately, I’ve been a little squeamish about spiders.

Would you prefer a picture of a nice, fluffy dog then?

I’m not a spider fan. I respect them for what they do for a living, i.e. keep the bug population down by eating them. (I could never do that. The world would be quickly overrun with bugs if it was my job to eat them.) But I don’t like them. I don’t squish 'em if I find them outside. But if they’re in my space it’s a different story. Smoosh city. And if it’s one of the really fast moving kind with the dark legs, the smoosh is usually immediately preceded by a loud “EEEEK!!”

About two weeks ago I found a pair of house spiders catching bugs behind the soap dispenser in the bathroom. There’s a nightlight there; it attracts anything buzzing around the house after everyone goes to bed. These two were making out like bandits. I couldn’t help but admire their ability to recognize prime real estate.

I left them unsquished for a week. Then, when I couldn’t put off cleaning the sink any longer, I scooped them up in a bathroom cup and set them outside near the porch light. I figured two resourceful arachnids such as themselves could find profitable new locations. Haven’t heard from them since.

That’s the closest I’ve ever come to making a spider a pet. I kind of miss them. But if either of them had set a foot outside of that cup, it would have been goodbye Charlotte.

Lord, both of those spiders look like they could take a napalm strike and keep coming.

And this is why, my fellow Americans, I am for increased anti-spider defense funding, and against letting horrific and disgusting catastrophes of God’s creation hunt us and drain our precious bodily fluids in our sleep. My esteemed opponent, on the other hand, is a spider lover! Is that the kind of person you want defending your children? Watching over the most fragile, the most vulnerable of our society? I think not.

Thank you, and God bless America.