…Egypt’s Ministry of Antiquities had appointed a committee of archaeologists to open the relic, which was unearthed at a construction site.

According to Egyptian news outlet El-Watan, they initially lifted the lid of the tomb by just 5cm (2 inches) before the pungent odour forced them from the inspection scene entirely. They later prised it open with help from Egyptian military engineers…

Addressing media fears that disturbing the tomb could trigger an implacable Pharaoh’s curse, [secretary-general of the Supreme Council of Antiquities Mostafa] Waziri declared: "We’ve opened it and, thank God, the world has not fallen into darkness.

“I was the first to put my whole head inside the sarcophagus… and here I stand before you … I am fine.”

Despite that, the site has now been cleared of people amid fears the sarcophagus could release lethal toxic fumes, Egypt’s state-owned newspaper Al-Ahram says.

Oh, of course you’re “fine”, Mr. Waziri! It’s the rest of us who are doomed–doomed, I tell you, DOOMED!

(Even more so than we already were, I mean.)

I’ve released some lethal toxic fumes in my time, but I didn’t kill anyone. As far as I know.

We’ve opened it and, thank God, the world has not fallen into darkness.

The eldritch evil NEVER kills the defiler, he’s the host!!! Watch three weeks from now his secretary is going to be all “Mr. Waziri is very ill, he hasn’t been to the office in weeks.” Tom Cruise should go shove a bronze sword through his heart now as a preemptive strike!

Who knew that the ancient Egyptians actually invented the Dutch oven?

We’ve opened it and, thank God, the world has not fallen into darkness.

I’ll call Poirot, someone get some curse repellant. I ain’t scared.

I’ve released some lethal toxic fumes in my time, but I didn’t kill anyone. As far as I know.

I’ll call Poirot, someone get some curse repellant. I ain’t scared.

I was reading these posts and wondering if you might be in de Nile?

Thousands of years old body smells bad. Who would have guessed?

Wonder if the gas might have been tana leaf fumes.

Mysterious ancient sarcophagus finally opened in Egypt after weeks of...

Archeologists have finally uncovered a mysterious 2000-year-old sarcophagus that was discovered in Alexandria, Egypt at the beginning of the month.

Thousands of years old body smells bad. Who would have guessed?

It’s not the mummies that smell, it’s the antique sewage they’ve been soaking in for the last few decades. 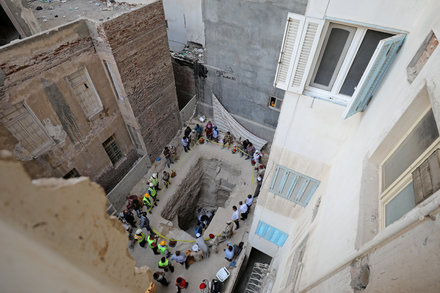 Inside That Black Sarcophagus in Egypt? 3 Mummies (and No Curses)

A sarcophagus found in a pit in Alexandria last week was opened after much speculation over who, or what, was inside.

The answer was decidedly less exciting when the sarcophagus was opened on Thursday. Inside were three skeletons floating in foul-smelling sewage that had leaked into the vessel from the road above through a small crack in the sarcophagus, according to Egypt’s Ministry of Antiquities.

“Unfortunately the mummies inside were not in the best condition, and only the bones remain,” Mostafa Waziri, secretary general of the Supreme Council of Antiquities, told reporters at the site, according to Reuters.

Sounds like the start of a real tasty curse, if you ask me.

Indiana Jones and the Sarcophagus of Poop.

A couple of the skulls look as though they may have suffered violent injury, perhaps in battle. One has a hole that looks like it might have been caused by a penetrating arrow or spear. Another skull has a big hole, and the missing piece of cranium looks as though it’s there next to it, perhaps lopped off by a sword or something similar.

Are we sure they didn’t actually find SCP-076?

Carnac the Magnificent: May the sewage from one thousand infidels flood your sarcophagus.
Ed McMahon: Hiyoooo!

Well now, you know, There are some people who are suing to be allowed to drink the magical, supernatural energy drink that they believe it to be. I think they should let them as long as they are allowed to film it. From one guy, paraphrased: It can’t be sewage. Skeletons don’t poop. You can’t fool me. Sounds right to me.

“I was the first to put my whole head inside the sarcophagus,” he said to the woman at the bar, a roguish twinkle in his eye. That line NEVER failed him.