NASCAR and the new HEMI

I know that the engineering restrictions for power trains in NASCAR limit the engine to a 360cui/5.9l pushrod V8, fed by a carburetor.

If you adapt a carburetor intake to the new DaimlerChrysler Hemi, would it be legal to race?

Since I don’t have a NASCAR Winston Cup Rule Book handy, this is an educated WAG.

The NASCAR rules during the last run of the Hemi restricted it to tracks of 2 miles or less after the Dodges and Plymouths blew everyone away. I imagine that said rule probably has been written out, but it might not have.

That said, using the Hemi wouldn’t really be worth the effort IMO. Converting it from fuel injection to carburetion would require too much time and effort, plus NASCAR would have to approve it, teams would have to spend even more money to replace their engines.

The engines used in NASCAR have almost nothing to do with the car sold to the public.

For example, you can’t even buy a Monte Carlo with a V8, not any Dodge car with a HemiV8.

What makes NASCAR engines different from the engines in street cars?

HowStuffWorks has an article on the very subject! 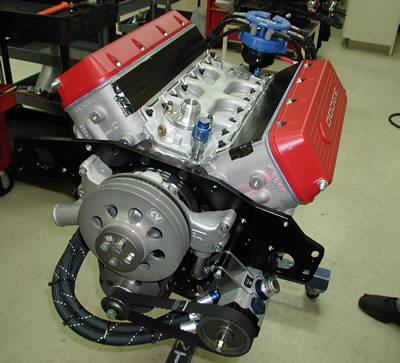 The engines in today's NASCAR racecars produce upward of 750 horsepower, and they do it without turbochargers, superchargers or particularly exotic components. So how do they make all that power?