Neighbor Issue: Selling drugs, illegal occupancy, vandalizing my vehicle in retaliation. What to do?

Quick summary: I live in a really awesome neighborhood. It’s transitioning from old Italians to young yuppies that are surprisingly respectful. I get along with all my neighbors, young and old. This is probably due to investment: everyone is a homeowner on my street except two houses. One house has great people, a nerdy software engineer and his girlfriend. The other house, the renters are the definition of white trash.

One person has a real job, everyone else (edit: between 3-6 randoms) sells drugs and parties all hours and trashes the yard. I’ve been displeased with the situation for a year but only recently has it become actually concerning. They throw trash into the alley and let their dogs poop in the alley. Annoying and white trash behavior? Yes. Dangerous? Nah.The houses are row houses, so we’re all in close quarters.

Twice in the last two months I’ve walked out of my house to see them selling drugs. Cars come at all hours of the night - and I don’t typically see/hear them since I run a fan for white noise to sleep. In retaliation, they’ve smashed my vehicle door and window. (Twice they’ve called the cops and ask me not to “block their gate”. Everyone’s gate is blocked in the alleyway by legally parked vehicles, only they need late night access to their gate to sell drugs.)

Each time I’ve said nothing, but I also haven’t made it a point to look away or change what I was doing.

I filed a police report but obviously nothing will come of it.

I don’t think people stop being drug dealers nor do I want my neighborhood SWAT’d. I know I’ll never have evidence to get them to pay for the damage to my vehicle. I’m neither angry nor scared; I want the problem eliminated.

So the question is: **how do I make them uncomfortable enough to get them to move without causing further damage to my vehicle or potentially to myself and SO or roommates? **

My only idea is to email their landlord (who I once looked at a house with for sale with (he’s also a real estate agent)). Tell him what’s what and see if he won’t renew their lease.

Getting in touch with the landlord seems like a good idea, although given the retribution you’ve experienced already an anonymous letter might be the way to go. Any landlord with his or her salt wouldn’t want these people as tenants. Security cameras might be worth investing in as well (my impression is some are fairly cheap).

If you’re able to document the drug dealing (safely) with photos or other objective evidence, you might also be able to force the police to get involved. Have you talked with any of the cops at the local precinct in addition to filing the report?

Maybe you and/or others on the street could get the house sold–find a buyer, buy it…?

If you’re able to document the drug dealing (safely) with photos or other objective evidence, you might also be able to force the police to get involved. Have you talked with any of the cops at the local precinct in addition to filing the report?

Oh man, that’s a great idea. There are cops who live in the neighborhood, I just don’t know which houses they’re in. I bet I could find out by asking around, though. Cops are super protective of their turf, in my experience. I filed the report at the precinct and I played the “pretty helpless girl”. Bunch of fat middle aged men huddled around me and were interested…I knew it fell apart when they asked “what kind of drugs”? I should have answered ‘I think heroin and coke’ and they’d have staked it out. Since I said - truthfully - “I dunno”, they immediately lost interest.

I forgot to specify: they’re not my immediate neighbors, they’re about 3 houses down from me. Row houses, so we’re close, but definitely wouldn’t be able to position a camera anywhere nearby.

Maybe you and/or others on the street could get the house sold–find a buyer, buy it…?

Renovated rentals are very hard to come by in this neighborhood and the landlord makes a bundle renting it, plus it’s actually his sister’s house and I believe he’s hoping she’ll move back at some point. Good thinking though, would be a great avenue to pursue if not a unique situation.

This may seem a little odd, but if you want to force other parties (landlord, police, etc.) into action, you might want to contact your local news “On Your Side” type of thing. I have a friend who hosts one of those things and he’s told me that local publicity is the best way to spur action.

I’m not really sure what your angle would be, but from what I hear from him, local news channels eat that kind of thing up, since it gives them a chance to show they are still relevant, and enough people watch it to pressure others into action.

I’d just call all your local news stations, tell them that you’ve been trying to break up some drug ring, and much like Pavlov’s dogs, they should come salivating, wanting to break the big story.

These are all good ideas, but have you considered “angry mob” justice?
You could also try calling the cops on them whenever they throw wild parties or make too much noise. I’d even expand that to any time you see a strange car on the street or any infraction whatsoever. It’s sort of like “broken window” theory. They will start to get very uncomfortable selling drugs if they keep getting hassled by the cops for every minor thing.

If your neighbors share your concerns, start a Neighborhood Watch.

Who are the people buying the drugs? If you can make them uncomfortable coming to your neighborhood, the trade will disappear. Ask the police to increase patrols for a couple of weeks, especially at any high-traffic times you notice.

There was a similar thread in a blog about living in Washington DC that might be relevant. I’m linking to it below, some of the posters were successful in their efforts to get the police to take the issue seriously. 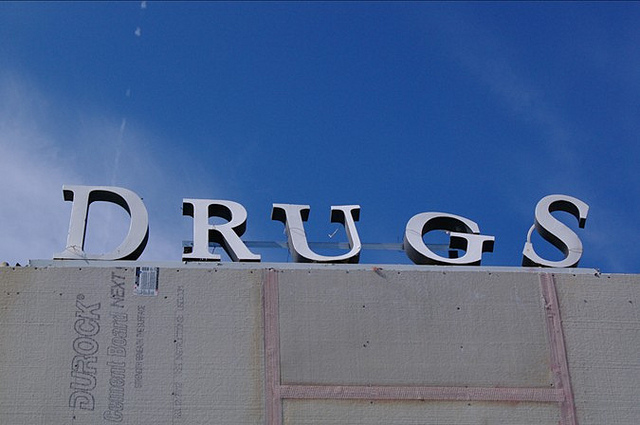 From the Forum - Getting rid of drug dealers

Photo by PoPville flickr user philliefan99 Getting rid of drug dealers (Hill East/Atlas/Rosedale): "I’ve lived just south of Benning Rd in Northeast for almost a year now. I love my neighborhood and my neighbors, with the exception of one building...

Maybe you could try selling drugs cheaper then them and put them out of business.

I think the first place to start is the landlord. If it’s easy to rent in your neighbourhood, he should be able to kick the bums out and put some good tenants in. It’s probably not good for his property to have them in there, either - those kind of people usually trash their own living quarters as well.

My experience with bad (druggy) neighbors is that often it’s not the neighbors themselves who trash the place. It’s all the “visitors” who stop by that cause most of the trouble.

You need to be prepared for this to go nowhere. When I had a problem with druggie neighbors I contacted landlords, police, etc. and no one anywhere did a damn thing. We eventually moved out of state, not specifically to get away from them but man that was an excellent perk!

Expect everyone to make noises about how this is unacceptable but low enough on the crime totem pole to not warrant any action at all from anyone with the power to stop it. Unless you are in a sleepy 'burb somewhere drug dealing and vandalism are small potatoes for your local law enforcement.

I’m sorry you have to deal with this.

I wish you a speedy and effective solution to your problem!

Another call is DV, as in you report someone is screaming for help. We had a neighbor who was running a meth lab shut down by the DEA, state troopers AND the county sheriffs dressed in their swat clothes. Every time someone reported screaming one of them went to jail- for a minute. A neighbor who was a volunteer firefighter looked to see what the white smoke was from (we have burns bans in the summer) and saw enough to get the DEA involved. Everyone around here is armed, too. 'course that is because of the cougars and not the sexy old lady kind.

You need to be prepared for this to go nowhere. When I had a problem with druggie neighbors I contacted landlords, police, etc. and no one anywhere did a damn thing. We eventually moved out of state, not specifically to get away from them but man that was an excellent perk!<snip>

That’s an unfortunate reality, too - sometimes the assholes win, and the non-assholes have to move to get away from them. A lot of people think of it in terms of, “I’m not doing anything wrong - why should I have to move?!?” but sometimes it’s worth it just to get out of a situation that won’t get resolved.