Wow, I know I’m late to the game, but I only discovered this show last Fall. I watched a ton with my wife(a lot are on youtube).

Rhod Gilbert may have been a disappointment to some, but I liked him. Simon Amstell was my favorite, though, and he was hard to replace.

I don’t think I recognized a quarter of the musical guests they had on.

I loved every season with Mark Lamarr. I tolerated Simon Amstell for a while and gave up completely once they swapped to rotating hosts. I didn’t always recognise the guests, but that was never an issue as long as they were entertaining.

Rhod Gilbert showed promise; it’s a shame he won’t get another season to properly shine.

I wonder how Mock The Week does in the ratings. It’s getting older, too. It comes back in a couple weeks, actually.

Aw, man. I liked the Lamarr era most, and I’m in the minority that would put the rotating guest hosts as second, and Amstell last. I liked Amstell and some of his eps are classics (Jamelia’s first appearance, Barrowman’s appearance, that dick from Towers of London that everyone loved to hate on) but he was ultimately bad for the show, as he was so brutal they had trouble booking people.

The guest hosts weren’t consistent but there were some nice surprises in there - Clarkson did one in the series between Lamarr and Amstell that’s hilarious, and Adam Buxton’s was a good one, as was Alice Cooper’s.

I only discovered this show a few years ago, myself. I did go back and watch most of the old series.

I’m glad the show introduced me to Noel Fielding. I’d heard of him and gave a couple episodes of “Boosh” a try but never got in to it. Glad to have had the chance to see him in something else.

England is only a small island. I guess maybe they ran out of D-level musicians for their lineup?

I like Fielding, but I never thought he was all that great a team captain - he just didn’t know enough about music. His best bits as captain were when the other team members were just as eccentric as he was. My biggest gripe about Amstell would be my suspicion that Bill Bailey left the show because of him.

Hopefully the beginning of the end of the light hearted celebrity based panel show. I may be missing some rather good output but these shows became formulaic very quickly. I just turn off the tv when they come on(HIGNFY and QI excepted).

Still, we got this clip the last few years:

Ed Shereen passes out after sex. 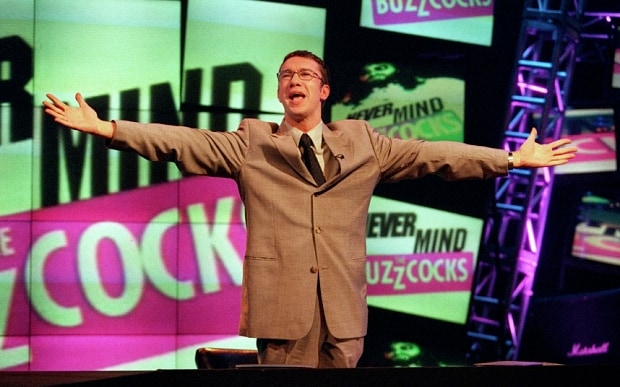 Good riddance to Never Mind the Buzzcocks! Women have had enough of moronic...

We no longer have an appetite for shows that appeal to the sort of lairy, casually sexist blokes programmers have chased for years

“Lad TV?” NMTB was hosted for years by an openly gay male. That’s a pretty open-minded audience of “puerile sexists” drenched in machismo. I don’t recall female guests being treated an worse than males, and Amy Winehouse got her worst shots from the other female panelist, Penny somebody. And to cite her as an example of poor treatment? She’s one of the few guests of any gender Amstell ever treated with genuine affection, despite being a moody drunk most of the show, to the clear displeasure of Bailey and Jupitus.

I was sad when they cancelled Never Mind The Full Stops

England is only a small island. I guess maybe they ran out of D-level musicians for their lineup?

And Lamarr was the best host by far.