I desperately hope they make a big impact. 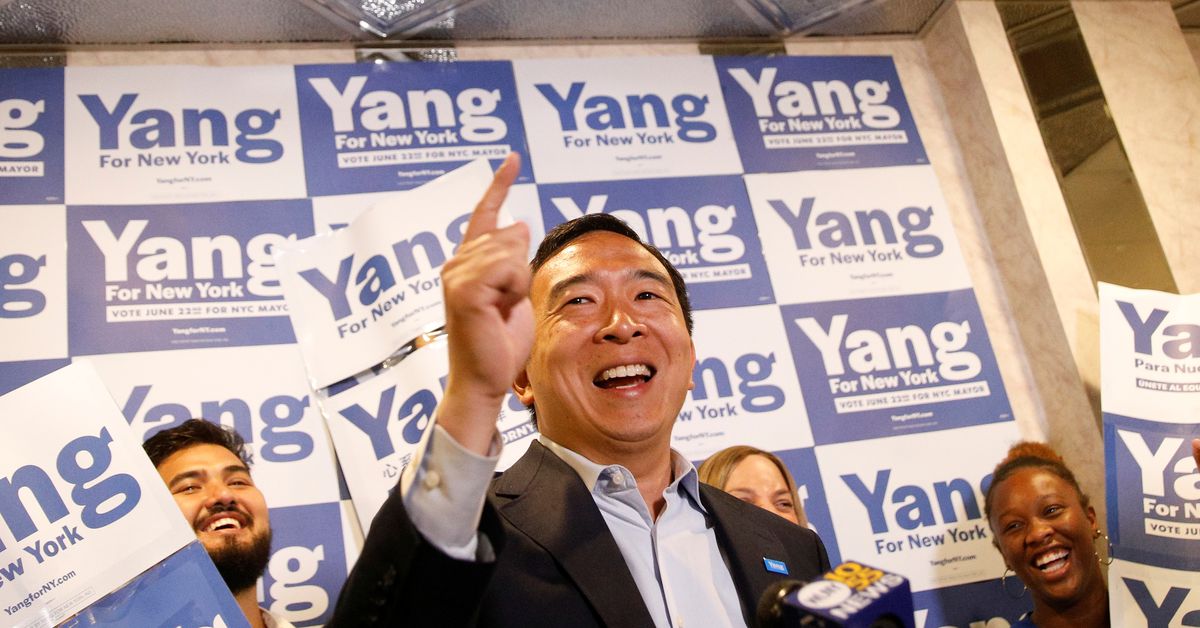 Dozens of former Republican and Democratic officials announced on Wednesday a new national political third party to appeal to millions of voters they say are dismayed with what they see as America's dysfunctional two-party system.

“The party, which is centrist, has no specific policies yet.”

We’ll see what they say in Thursday’s launch.

I’m not entirely convinced that a third party that ran in certain legislative elections (esp. at the state level) couldn’t have an impact, but I still have no idea what the Forward Party is even trying to do.

I think a single-issue pressure group that basically only ran in races that would be uncontested for one party or another and tried to push electoral reforms such as ranked choice/single-transferable vote could actually have a ghost of a chance at an impact. This as far as I can tell is either a vanity project or an attempt to fundraise off of morons.

If this doesn’t tell you everything you need to know about the purpose of this ‘’‘‘party’’‘’,

The merger involves the Renew America Movement, formed in 2021 by dozens of former officials in the Republican administrations of Ronald Reagan, George H.W. Bush, George W. Bush and Donald Trump; the Forward Party, founded by Yang, who left the Democratic Party in 2021 and became an independent; and the Serve America Movement, a group of Democrats, Republicans and independents whose executive director is former Republican congressman David Jolly.

then you are not paying attention to actual American politics.
Congrats conservatives, you found a new way to dilute the non-conservative vote and win more elections.

That’s because in most democracies the mainstream parties usually have the centre covered ('cause that’s where the bulk of voters are) and the only fertile political ground is on the political poles. In the US there’s 40% up for grabs, though it is far from a coherent voting bloc.

If the Tea Party/Trumpists negate the capability for the GOP to engage the centre and the DEM are looking more to the progressive left then there is a constituency to be taken, though it’d be like herding cats and probably they are looking at the smaller but safer demographics of GOP/DEM moderates rather than the non-aligned.

Specific policies indeed.
I hope that they will present very specific policies, plans, that target real things. Not a big bowl of word salad. It would be very nice if they honestly told the people what the costs and work involved will be.
I think people are at the point where they are willing to put in dollars and effort to straighten things out. IF. A party can present solid plans to do it.
There is way too much division on issues that are not essential to the real welfare of the country. It diverts responsibility from those in charge of fixing those things that are in critically bad shape.
The core machinery of the country is falling apart. Those in charge of keeping it running choose to put up some rah rah posters, instead of fixing it.
It would be good to have a party to vote for, not just against.

“The party, which is centrist, has no specific policies yet.”

How about “We accept those platforms that nobody doesn’t like.”

Sounds like the mail-order church that I was ordained by in the 60s, due to my ability to lick a stamp. Their doctrine? “We believe in that which is right.”

In a very different political system (and society), but the FDP in Germany probably fits the bill as a centrist 3rd party.

Started by former officials. IF current officials are willing to join like Liz Cheney or Joe Manchin then it may have a chance. What has to happen is that the hegemony of Dems and Pubs needs to be broken to allow third parties to have a chance. For example allowing proportional representation in the House rather than districting. States that have proportional EVs rather than winner take all (And no, Nebraska and Maine are not truly proportional). The Forward Party holding a significant number of seats in state legislatures and a few Governorships.

Very stupid idea (at least if the goal is to improve and strengthen American democracy). Help the Democrats destroy Trumpism (i.e. the current incarnation of the Republican party), then maybe consider a new party.

The Forward Party holding a significant number of seats in state legislatures and a few Governorships.

This, and even more local races, is where any new party that wants to “break the two party system” needs to start, because it’s the control of the state and local offices that really lets the Dems and Reps control everything.

And this isn’t going to happen overnight. It’s going to take years, maybe decades, and even if you make early gains, the nature of elections means you’ll lose some gains the next time. If you’re not in it for the long haul, you might as well not even start.

LOS ANGELES (Reuters) -Dozens of former Republican and Democratic officials announced on Wednesday a new national political third party to appeal to millions of voters they say are dismayed with what they see as America's dysfunctional two-party...

The merger involves the Renew America Movement, formed in 2021 by dozens of former officials in the Republican administrations of Ronald Reagan, George H.W. Bush, George W. Bush and Donald Trump; the Forward Party, founded by Yang, who left the Democratic Party in 2021 and became an independent; and the Serve America Movement, a group of Democrats, Republicans and independents whose executive director is former Republican congressman David Jolly.

The article notes that historically, third parties have not done well. It notes that Ralph Nader may have cost Al Gore the election in 2000. I recall there was debate as to whether Ross Perot cost Bush the Elder the 1992 election. I wonder how the Forward Party may act as a spoiler. I think that it probably won’t siphon off too many Republicans because they want Their Guy in and probably vote for any Republican instead of a candidate that might align more closely with their views – especially if that candidate is a former Democrat. I suspect Forward might siphon more votes from the Democratic candidate.

Can’t wait to vote for them…

I read their WaPo editorial yesterday, and they came across as a strange* combination of hopelessly naive and insufferably smug.

There are two ways a third party can make inroads, IMO:

There’s some tiny possibility they’re considering the second, and if they make a really good show of doing that, I’ll have some more respect for them. As is, they look like a waste to me.

[*] On edit, I’m not sure why I used the word “strange,” since that combination is what most third parties sound like. “Entirely predictable” would have been better.

If the Forward Party can siphon off say… 10% of GOP voters who don’t like the way the party is headed, but are too indoctrinated to vote Democrat, then the party has done some good.

A party needs more than “We’re not either of the other two parties” to be successful. Wait, no, scratch that, they need more than that to really even exist.

“Centrist” doesn’t count as a position. Most people who call themselves “centrist” fall into one of two categories: Either they’re delusional (“I’m centrist on the issue of homosexuality, because I oppose them having civil rights, but I don’t want to round them up in extermination camps”), or they have strong opinions, but in different directions on different issues (“I support strong gun control and oppose abortion”).

Can’t wait to see them crash and burn at a high rate of speed.

They are doomed from the get go. They will only siphon off votes from the left, with absolutely zero chance of any success, which means they will be banned by law by the next “election.”

Why? So far you haven’t explained why you support this nonexistent party without policy positions.

I’m curious about how they will be more centrist than Democrats. Here are my guesses: Try and destroy social security and “not be beholden to the woke mob” (whatever that means – maybe be bigoted Democrats?).

Democratic policies poll extremely well when they are separated from the party affiliation.