And You Shall Be Upheld: Quotations for Democracy-Builders
Compiled and Introduced by K. Sherrerd Lowry
ISBN: 978-1-945939-04-4

It’s always helpful to have an apt quotation (or two or more) at hand when debating apologists for Dear Leaders. This book was designed to make such remarks easy to find and use, with topics such as Accountability, Justice, Tribalism, National Security, Rule of Law, Conspiracy Theorists, Anti-Authoritarianism, and Protections for Whistleblowers (to name a few of the book’s chapters). 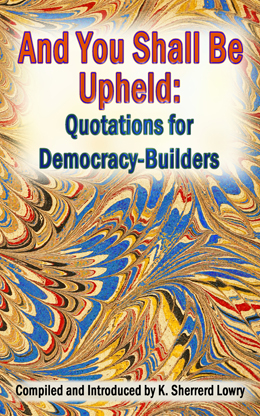 I’ve been collecting politically-oriented quotations for years. In doing research for this book I was interested to see how many such remarks are not well-sourced. This is, of course, a perennial issue when it comes to quotations. I discuss this in the book, and did so, too, in the introduction to my coloring book Wise Words from Jane Austen :

Fake and misattributed ‘Austen’ quotations are all over the Internet. A frequently-seen example: “There are as many forms of love as there are moments in time.” This quote is attributed to Austen on hundreds of sites. But it appears nowhere in Austen’s novels—or in any of her letters or other writing. It appears to have been taken from a screenplay—a 1999 adaptation of Mansfield Park , by Patricia Rozema. It’s ‘Austen-like’—but it’s not Austen.
For this book, care has been taken to ensure that all quotations do come from Jane Austen’s works.

The sloppy “memes” that are annoyingly common all over the Internet do not appear here. Sourcing is provided for all quotations except those appearing in the last chapter. Less-well-sourced quotations do appear in that chapter, but only those that are so apropos that they couldn’t be left out of a work on supporting democracy (and rejecting tyranny). These include two frequently-quoted aphorisms attributed to Thomas Jefferson:

The government is the strongest of which every man feels himself a part.
-----Thomas Jefferson, 3rd President of the United States. Widely attributed; sourcing not found. Sometimes cited as “1807” but without further details; see: http://wvhs.ipsd.org/uploads/AP%20Summer/2014/AP_Government_Summer_2014.pdf

If you expect people to be ignorant and free you expect what never was and never will be.
-----Thomas Jefferson, 3rd President of the United States
No date found; this has been quoted by JFK and Reagan among others:
https://www.jfklibrary.org/events-and-awards/forums/past-forums/transcripts/thomas-jefferson-the-politician

These get quoted everywhere—but because they are disputed, they belong in that last chapter. (The standards of verifiability for inclusion in the main body of the book—which are stringent—may be inferred.)

Many readers probably have a list, formal or not, of quotations that carry personal meaning. Some favorites of mine:

The first principle is that you must not fool yourself — and you are the easiest person to fool.
-----Richard Feynman, in “Cargo Cult Science”, adapted from a 1974 Caltech commencement address
http://calteches.library.caltech.edu/51/2/CargoCult.htm

One of the saddest lessons of history is this: If we’ve been bamboozled long enough, we tend to reject any evidence of the bamboozle. We’re no longer interested in finding out the truth. The bamboozle has captured us. It’s simply too painful to acknowledge, even to ourselves, that we’ve been taken. Once you give a charlatan power over you, you almost never get it back.
-----Carl Sagan, in The Demon-Haunted World: Science as a Candle in the Dark (New York: 1995); Ch. 13, Obsessed with Reality, p. 241

The brain is designed with blind spots, and one of its cleverest tricks is to confer on us the comforting delusion that we, personally, do not have any.
----- Carol Tavris and Elliot Aronson, in Mistakes Were Made (But Not by Me); Harcourt, 2007
Excerpts, including the quotation, found at:
http://www.thesecularbuddhist.com/episode_071.php

These three are among the couple of dozen quotations that appear in the next-to-last chapter: “Self-Deception versus Insight.” The selections there reflect my opinion that eternal vigilance over one’s own propensity for motivated reasoning is vitally important to the project of supporting democracy. It’s at least as imperative as is eternal vigilance in the service of ensuring freedom, liberty, peace, and every other thing appearing in quotations about Eternal Vigilance being the price of (fill in the blank).

(And by the way, current scholarship indicates that the many pithy quotes about Eternal Vigilance we often see attributed to Jefferson, Abraham Lincoln, George Marshall, and others, actually stem from a 1790 remark by the Irish politician John Philpot Curran.) John Philpot Curran - Wikipedia

I hope that those who pick up the book find favorites of their own, as well as quotations new to them—new and useful.

The paperback is priced at $6.99. The “Look Inside” feature on the sales page lets you get an idea of the book’s content and appearance. 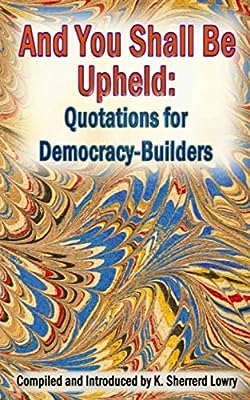 And You Shall Be Upheld: Quotations for Democracy-Builders

The ebook is now up: 99 cents or FREE if you have “Kindle Unlimited.”

And You Shall Be Upheld: Quotations for Democracy-Builders

It’s got the “text to speech” feature, so you can listen to it instead of reading it, if that’s your preference.

Update for those interested in the self-publishing process: this is the first physical book I’ve published since the pandemic began, and due either to that or to our current Postmaster General’s policies, the time period needed to receive copies has increased a bit. I used to submit files to KDP, and get the physical copies within three or four days of their approval of the files. But this took seven days.

Of course I had ordered a large number of copies, so that might have made a difference. The result was worth waiting for, though: the Delaware printer did a great job.