My wife and I bought a house a few months ago and thus we are finally able to have pets after ~15 years of renting from landlords with a “no pets” policy. Of course, we had to get cats.

Meet Marble and Splitz. Marble is on the left, Splitz is on the right. This pic is about 6 weeks old because I was having trouble getting Imgur to upload an image. ID-10-T problems suck.

They came to us from some neighbors who had a cat with a litter of kittens so were tying to find homes for them. They’re sisters, of course. They were covered in fleas when we got them so we made a late-night run to Petco for some Advantage II and of course stocked up on canned cat food, a scratching post, some toys… rotten things cost almost as much as my human kids.

They took to the new house like a duck to water. Right now they’re stricktly indoor cats but after we get them spayed and chipped we’ll introduce them to the great outdoors.

One problem we are having is they really, really like climbing on the counters and on top of the desks (where we have pictures and other things that will get damaged when [not if] they get knocked over by uncaring felines). We’ve tried placing sheets of crumpled aluminum foil where we don’t want them to go and, after some hesitation, they simply walked across it like it wasn’t there. A spray bottle isn’t much use, as we can’t catch them in the act.

But they were able to take to the litter box after just a day or two and we haven’t had any accidents since the first week. They’re quiet, they play in the morning and sleep in the afternoon, and like to crawl all over the laps of anyone who is sitting on the couch.

Life with cats is good.

Life with cats is good.

Life with cats is very good and you’ve got a couple of lil cuties!

Put cookie sheets hanging half on and half off your counters so that when a curious kitten jumps on them, the cookie sheet will fall on the floor and make a scary noise. It hasn’t worked with George yet, but it sounds like it might work for different cats.

Definitely SQUEEE! What a couple of cuties!

Kittens gonna explore, and there is nothing you can do about it. They will grow out of it once they’ve determined that there isn’t anything interesting on top of the counters. Tango was a demon for climbing his first couple of months, but has mellowed…a little bit. Maybe.

All Hail the New Lancia Overlords!

Too cute for words!! Except for our first feline overlord, we’ve never had kittens - we always got adult rescues. Dunno if we missed out, but I’ll just melt vicariously over yours.

They’re so cute that I felt obliged to post in the official Pet Pictures thread on your behalf, with all due credit of course, and a link back to this one.

Reposted from @Lancia’s thread, just so no one misses out! [image]

They (especially Marble) look like our late (lived to 22-ish) tortie Heidi.

Damn. Those might be the cutest kittens I’ve ever seen…

They briefly posed for a pic today, clearly offended that they had to sit still for half a second. They’re ~6 weeks older today than they were in the first pic.

Everyone squees! over them. Our local vet has a parking lot drop-off service. You pull into the parking lot, send them a text, and they come out and get your pet and take them in for whatever they need. Almost no F2F contact. When we took Marble in for her first round of shots the vet tech was absoloutly giddy over her, ooohing and aahhhing and yes, squee!ing the whole time she was with her. It was cute.

“Multiple exclamation marks,’ he went on, shaking his head, 'are a sure sign of a diseased mind.” - Pterry, Eric

They’re so cute that I felt obliged to post in the official Pet Pictures thread on your behalf, with all due credit of course, and a link back to this one.

Thanks. I wasn’t aware of that thread, now I know how I’m going to kill my afternoon.

I will make no attempt to deny that.

Wow, what adorable cuties! I haven’t had a kitten in so many years of adopting adult rescues. But I’m truly envious.

I have a forever runt kitty. Stormy Daniels is 4.5lbs and about 4 years old. 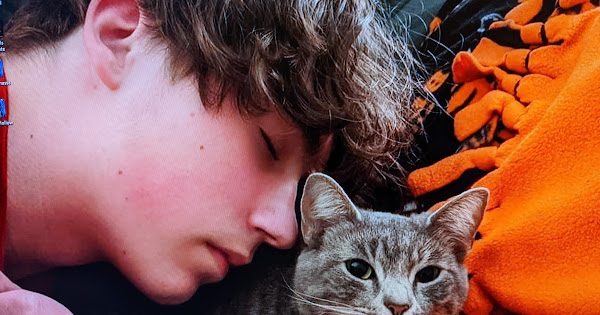 Squeee!!! is right! They are adorable.

The climbing will lessen a bit as they get bigger and heavier, but the damage to photos and important stuff may continue. You make want to close the door to a room with precious/expensive stuff, at least for a while. Or get in the habit of protecting it all in drawers and files.

And Squeee! again, because they are worth it.