This looks very much like a publicity stunt, but I concede that I could also see a frustrated voter doing this

The woman walked into a polling place in Exeter wearing a “McCain Hero, Trump Zero” T-shirt but took it off after being told it violated electioneering rules.

EXETER, N.H. (AP) — A voter who was told she couldn’t wear an anti-Trump shirt at a polling place because it violated electioneering rules simply whipped it off and did her civic duty topless.

The woman walked into a polling place in Exeter, New Hampshire, on Tuesday’s primary election wearing a “McCain Hero, Trump Zero” T-shirt. Town moderator Paul Scafidi told her she couldn’t wear a shirt featuring a political candidate while she voted, Seacoastonline.com reported in a story that did not identify the woman.

No person “shall distribute, wear, or post at a polling place any campaign material,” according to state law. People who are convicted can be fined as much as $1,000.

Neither Trump nor McCain, who died in 2018, were on Tuesday’s ballot, which featured races for governor and Congress.

The woman pointed out that another woman nearby was wearing a T-shirt in support of the American flag, Scafidi said. He answered that an American flag was not electioneering and that the “Trump Zero” shirt would have to be covered.

So the woman asked if he wanted her to take her shirt off. She wasn’t wearing anything underneath.

“I said I’d rather she not,” Scafidi said. “But she took it off so fast, no one had time to react. So the whole place just went, ‘whoa,’ and she walked away, and I let her vote.”

He noted that she could have just gone into the hallway and turned it inside out.

After voting, Scafidi said, the woman put her shirt back on and left. 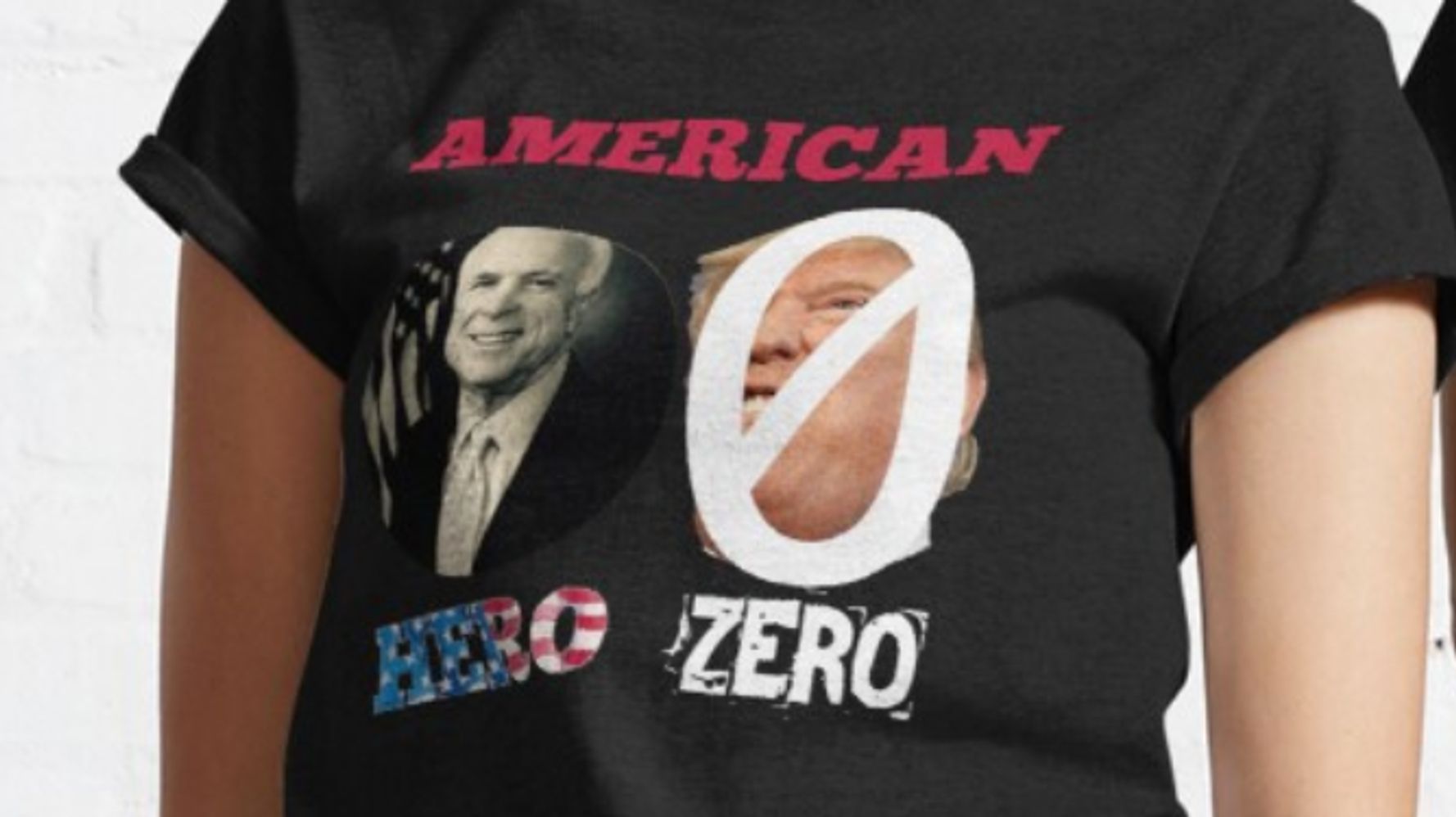 The woman walked into a polling place in Exeter wearing a “McCain Hero, Trump Zero” T-shirt but took it off after being told it violated electioneering r...

While I agree with the sentiment of the shirt, the lady was being a dumbsh*t. Everyone should know and abide by the rules when voting.

It’s hard to call it electioneering when neither Senator McCain nor President Trump were on the ballot.

Pix, or it didn’t happen!

If my state has a rule about what you can wear (short of indecent exposure laws, ahem), then I haven’t heard about it. I could very easily end up accidentally breaking the law, if I owned anything with print or pictures on it.

So much politics is concerned with tit for tat.

In a Democracy there should always be at least two choices to vote for.

According to NCSL, ten states have laws restricting what you can wear to vote: California, Delaware, Kansas, Montana, New Jersey, New York, South Carolina, Tennessee, Texas, and Vermont. That must be out of date, because New Hampshire also restricts it.

My state (Kansas) does have a similar law. It’s a general electioneering statute intended to prevent campaigning at or within 250 feet of a polling place, but includes “wearing, exhibiting or distributing labels, signs, posters, stickers or other materials that clearly identify a candidate in the election or clearly indicate support or opposition to a question submitted” (however, it specifically excludes bumper stickers on your car).

As an election worker, I’ve always been instructed to tell voters to remove hats or buttons, and cover clothing (zip your jacket over your campaign t-shirt, e.g.) or turn it inside out. In the August primary, Trump wasn’t on the ballot, but come November, I think we may have some problems in our polling place with Trump masks. I don’t want maskless voters, I don’t have enough disposable masks to hand them out, and I’m not sure what can be used to cover the mask without unnecessarily restricting airflow.

and I’m not sure what can be used to cover the mask without unnecessarily restricting airflow.

Turn the mask inside out.

Spray paint! Washable of course. How about some nice neon rainbow colours?

As an Election Judge here in Minnesota, we also have the same law about electioneering clothing in the polling place. We’ve regularly had to tell people to turn a shirt inside out, remove a hat or a button, etc.

We used to apply it to ALL candidate material, but a recent Court case stated that we couldn’t disallow material for candidates who were not on the ballot that year. Not sure how that would apply in this NH example: Trump wasn’t on the NH Primary ballot, but he will be on a NH ballot later during this election year. So we would probably also not have allowed it.

I wore my ITMFA button when I voted on PA’s primary. Nobody said anything.

I couldn’t resist the reported newsbit for the cheap shot, but even if she had a problem with being told her shirt was inappropriate she could have gotten the same reaction by simply taking her shirt off (momentary nudity, since she had no bra, giving a bit of protest and shock value), turning it inside out, and putting it back on. No message visible – no problem.

My guess is that she saw going topless as a protest against her speech being curtailed.

So much politics is concerned with tit for tat.

Ha-ha! I wish this site had a Like button…

I want one of those shirts.

I have got a controversial shirt that says # teamfauci. But I need that shirt now.

I only wear controversial shirts at home. When I go out, I wear mostly Star Trek shirts.

Yeah, trying to call a shirt that doesn’t say anything about any candidates or issues being voted on ‘campaign material’ is clearly someone overreaching their authority. The local official tried to throw his weight around unjustifiably, she decided to comply with his instructions in the most convenient way possible. If you’re going to try to throw your weight around like that, you should be prepared for people comply with your demands in the way that causes you the most inconvenience and them the least. Expecting her to go into the hallway and turn it inside out instead of just removing it was really foolish on his part.