Not sure if anyone is actually interested, but I have a quick review of the new Allegiant Stadium in Las Vegas for you. It’ll be brief…it sucks. Like kinda glaringly bad for a brand new facility.

Wow. A lot of that, especially the skimpy restrooms and concessions, just stuns me. I’m surprised that they went that cheap in that aspect of a new stadium’s design.

I haven’t been to one of the new megabucks places, so I can’t say if it’s truly “cheap” in design. It’s certainly non-functional. It’s clean, the sightlines are very good, it’s super noisy, so the football aspect is perfectly fine. The LED screens are perfectly adequate but there’s nothing special about it, nothing hanging over the field which is the new status symbol. So that’s definitely a cost cutting move. There’s no wall, floor or ceiling coverings so it’s cement, I-beams painted black and lots of exposed conduit and ductwork. It’s not terribly different from the redone Lambeau’s concourse in that respect but I’d expect more out of a new stadium.

It’s not terribly different from the redone Lambeau’s concourse in that respect but I’d expect more out of a new stadium.

And, at least Lambeau has tons of food and beer booths, and they significantly increased the restroom capacity in the renovation.

To be fair, there’s no way he could have known at the time that 10 years later The Law would be investigating criminal activities at the WFT franchise (or could he?).

As far as I’m aware, there’s no criminal investigation into the WFT. The emails were part of an independent investigation initially commissioned by Snyder after media reports about atrocious workplace practices forced him to do something. The investigation was later taken over by the NFL.

The NFL, meanwhile, is adamant that they will not be releasing any other evidence or findings associated with the investigation, including the 650,000 emails that they reviewed.

Here’s a video from Youtube showing the entire play. If there’s DPI on the play, the camera doesn’t show it. Terrible, terrible call.

Here’s a video from Youtube showing the entire play. If there’s DPI on the play, the camera doesn’t show it. Terrible, terrible call.

In real time in that clip it looks like the defender had wrapped himself around the receiver and if I was officiating based on what I saw from that I’d throw a DPI. But in the gif showing things from a better angle and in slower motion it appears that the defender didn’t interfere at all, if anything it could even be OPI.

This obviously doesn’t look great, but it looks like whomever created the gif tried very very hard to cut it to make it look as egregious as possible, it starts in a very unnatural spot. That it starts when it does suggests that there may have been a lot more shoving and grabbing going on while the ball was in the air but before the camera cuts in.

But there clearly wasn’t. If you watch the video clip from the game there wasn’t much contact between the players until just prior to the ball’s arrival. And pause the gif on Twitter and start at the beginning; you will see both players are holding each others’ jerseys simultaneously, but the defender lets go while the receiver hangs on. It’s clear who is interfering with whom as the ball arrives. The clip isn’t misleading at all and when combined with the other video it does a pretty good job of showing what happened.

So if both interfere, it is offsetting penalties?

but why would you want to hold onto a CB?

It looks to me like the receiver is trying to use the defender’s jersey to gain leverage for his jump in his attempt to catch the ball.

I’ve watched the YouTube video several times. If there’s contact before the jersey-grabbing, it occurs when both receiver and defender are looking at the ball. At the 37-second mark is where the replay starts, and both are looking back at the ball. And the only contact you can see at that point is the receiver’s hand on the defender. (Granted, you cannot see the defender’s left hand from that angle. But neither could the ref, from where he was standing.)

It looks to me like the receiver is trying to use the defender’s jersey to gain leverage for his jump in his attempt to catch the ball.

Exactly. It is also done for the same reason a CB would grab a WR’s jersey; to prevent him from catching the ball (which is one reason why OPI is a penalty). But yes in this case I agree it was done for leverage.

I think the call was bad but as I said I can’t blame the official who threw the flag.

So if both interfere, it is offsetting penalties?

I’ve never seen it, but apparently “mutual pass interference” has been called at least once, by Ed Hochuli in a 2010 game between the Falcons and Saints. I can’t find a replay or even many references to the event.

In any case, I believe the result of such a call would be to replay the down.

In my experience most of the time that the officials see two players being equally handsy they don’t throw a flag and let it play out. You usually get a flag when it’s only one player who is overly aggressive. In this case on replay it looks like the defender backed off while the receiver kept grabbing the jersey so if anything it should’ve been OPI, if the officials were to review it on replay (which I know isn’t normally done in these situations).

Offsetting penalties are typically when there are two different incidents on the same play; say an offensive lineman was holding a pass rusher while a defender interfered with the pass. If instead it’s two players who are doing the same thing to each other simultaneously then generally they just leave it unflagged.

So what I see here in the reverse angle (and confirmed in stills shown elsewhere) is that Green appears to grab Williams at the collar just as he started his jump. He was holding him down to ensure he didn’t reach the ball and Williams starts fighting Green off to free himself.

I tend to agree that this probably should have been a no call since that kind of “inside the frame” hand fighting tends to be considered incidental. The fact that Williams’ body language indicates that he’s completely off balance makes you ask what the defender did to get him out of sorts. That’s why the flag came in.

The pull on the collar can be seen in the first frame of this gif. 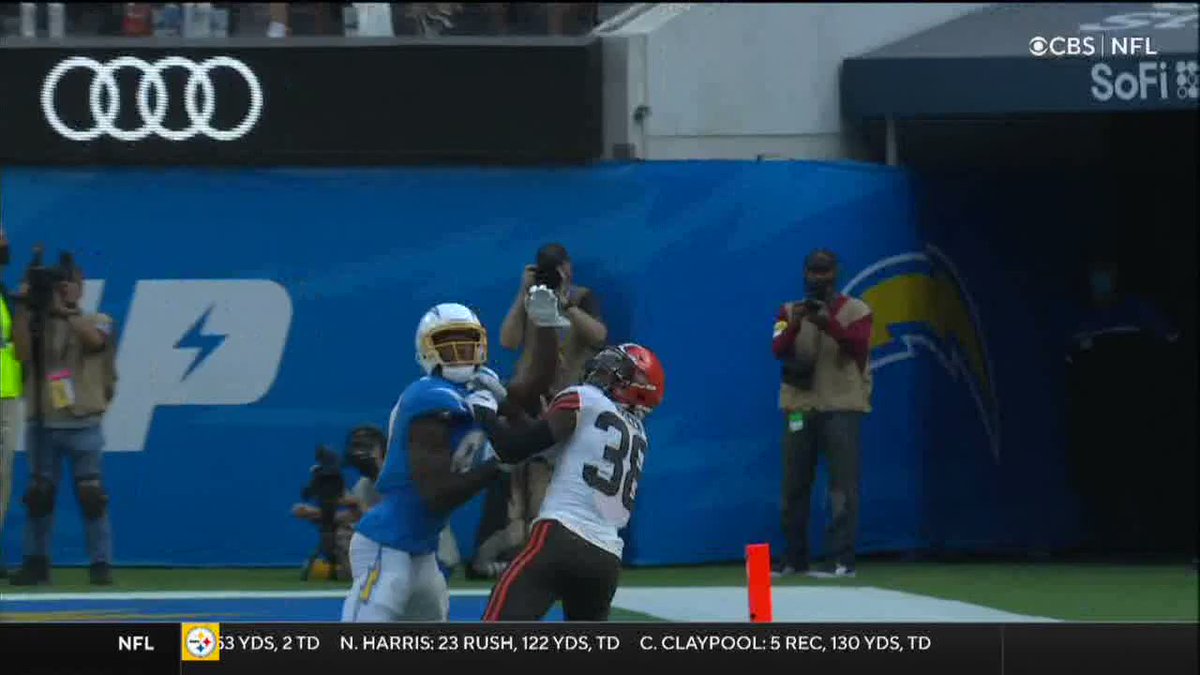 @JonDoss
This was called defensive pass-interference on the #Browns. Yikes. https://t.co/zqiJoKlUup
← previous page