Deshaun Watson’s search for yet another Happy Ending takes another step as he gets suspended for 6 games. He also has now settled 23 of 24 civil cases.

NFLPA seems OK with the 6 games, so there may not be an appeal. We will see.

NFLPA seems OK with the 6 games, so there may not be an appeal. We will see.

Goodell can still choose to increase the suspension as well.

If Watson or the NFLPA wanted to appeal, they would. I’d guess there were discussions held and they all just want this to go away as quietly as possible now. If it were a longer suspension, I’d hazard a guess they would appeal that.

The only surprise is how unsurprising it is. It was never going to be a full season suspension unless Watson did something totally unforgivable, like bet on games

Watson also didn’t get charged with a crime. If he did, there would be a different outcome.

It still seems far too light. But I don’t know the result of the investigation the NFL performed, what they learned. I have my own theory of what might have occurred, but it’s just speculation on my part.

Tua Tagovailoa threw a deep pass! And Tyreek Hill caught it! In practice! It spiraled and everything! It’s been all the news these last few days.

In other Miami Dolphins news:

I really hope we have a dominant secondary (and we actually might), because it sure makes Tua look like a mediocre quarterback on the regular.

The NFL has found the Miami Dolphins guilty of tampering with Tom Brady and Sean Payton, and has fined and suspended people, and stripped the team of draft picks.

The NFL has stripped the Miami Dolphins of two draft picks, including their 2023 first-round selection, and suspended owner Stephen Ross and fined him $1.5 million as a result of its investigation of allegations levied by former coach Brian Flores.

Congratulations Miami. You now can wear the crown as the “cheating team to hate”. Previous wearers: New England and New Orleans.

(For the Patriots I’m referring to Spygate, “Inflategate” was a joke.)

Do we call this one Tampergate?

Congratulations Miami. You now can wear the crown as the “cheating team to hate”.

Dammit Dolphins! At least when the Patriots did it, they also won games.

And losing that 1st round draft pick really sucks! If Tua doesn’t work out, they were going to have 2 first rounders next year, which would put them in prime position to trade up for some stud rookie. They still keep the other pick (acquired from the 49ers), but don’t get to keep their own.

Maybe the prosecutor should have rubbed his dick on the judge’s hand. Since that’s “not violent” I figure she’d have just shrugged it off.

This has nothing to do with the issues in the Flores suit. If they punish Miami for trying to tank they basically admit the the Flores suit has merit. They really don’t want to do that.

This has nothing to do with the issues in the Flores suit.

Or rather quite a lot to do with the suit in that they don’t want to add any more credence to his claims than absolutely necessary.

Considering what is already known about Ross, he takes his slap on the wrist and moves on. What, the punishment? He’s just going to blame the staff for losing, even after the sanctions, and the fine is a joke to a billionaire. When you’re that rich, any fine they’re likely to get is simply a fee rather than a punishment. As for being “suspended”, like that’s going to stop him from doing whatever he likes with the team from the comfort of home (or yacht or whatever) rather than the team facilities. We all just went through the COVID work from home era, right?

This has nothing to do with the issues in the Flores suit. If they punish Miami for trying to tank they basically admit the the Flores suit has merit. They really don’t want to do that.

The investigation found that Ross, on a number of occasions during the 2019 season, "expressed his belief that the Dolphins’ position in the upcoming 2020 draft should take priority over the team’s win-loss record,” and that comments of this type “were made most frequently to Team President and CEO Tom Garfinkel, but were also made to General Manager Chris Grier, Senior Vice President Brandon Shore and Coach Flores.”

“An owner or senior executive must understand the weight that his or her words carry, and the risk that a comment will be taken seriously and acted upon, even if that is not the intent or expectation,” Commissioner Roger Goodell said in a Tuesday statement. “Even if made in jest and not intended to be taken seriously, comments suggesting that draft position is more important than winning can be misunderstood and carry with them an unnecessary potential risk to the integrity of the game.”

The NFL did find there was at least some troubling actions by Ross over tanking (which contradicts Ross’ statement which makes Ross yet another lying piece of shit, which is a surprise to absolutely no one). While the NFL didnt conclude there was a $100,000 per loss offer by Ross, as Flores alleged, it certainly adds colloboration to the claim.

This a much better read on it. It allows them to “punish” Ross without explicitly making about tanking and the Flores lawsuit.

The Boston Globe is reporting on this (probably paywalled) and focusing, not surprisingly, on the Brady tampering.

Around the same time that Brady signed his Patriots contract [in 2019], the NFL found that Brady began having “numerous and detailed” conversations with Dolphins minority owner Bruce Beal Jr. about joining their franchise after the 2019 season.

According to the NFL’s sixth-month investigation, Beal, a real estate developer and friend of Brady’s, began recruiting Brady “as early as August 2019 and continued throughout the 2019 season and post-season.” These “numerous and detailed” discussions went through Beal, who then relayed the content back to Ross.

This was the same season that the Patriots tried to appease Brady by signing Antonio Brown and trading for Mohamed Sanu. He apparently thanked them by brazenly communicating with one of the Patriots’ top rivals.

Not a good look, Tom.

Ross’s three-year recruitment of Brady was finally coming to fruition this winter. Brady bought a $20 million home in Miami Beach, announced his retirement on Feb. 1, and was set to join the Dolphins’ front office this offseason, with the potential of unretiring and playing again. He was going to be a package deal with Payton, who shares Brady’s agent, Don Yee.

I also find the Sean Payton aspect fascinating. He decides to step down from the Saints, but not retire, and it’s clear now he was planning to go to the Dolphins, but Flores blew that all up and now he’s in limbo. Oopsie!

This was the same season that the Patriots tried to appease Brady by signing Antonio Brown and trading for Mohamed Sanu. He apparently thanked them by brazenly communicating with one of the Patriots’ top rivals.

Not a good look, Tom.

Apparently if a player facilitates “tampering” he’s not responsible in any way for it.

Seriously. Is that something in the NFLPA contracts, that players cannot (also) be held responsible for tampering? It takes two sides to have “numerous and detailed” prohibited conversations, after all.

NFL is appealing the Watson ruling: 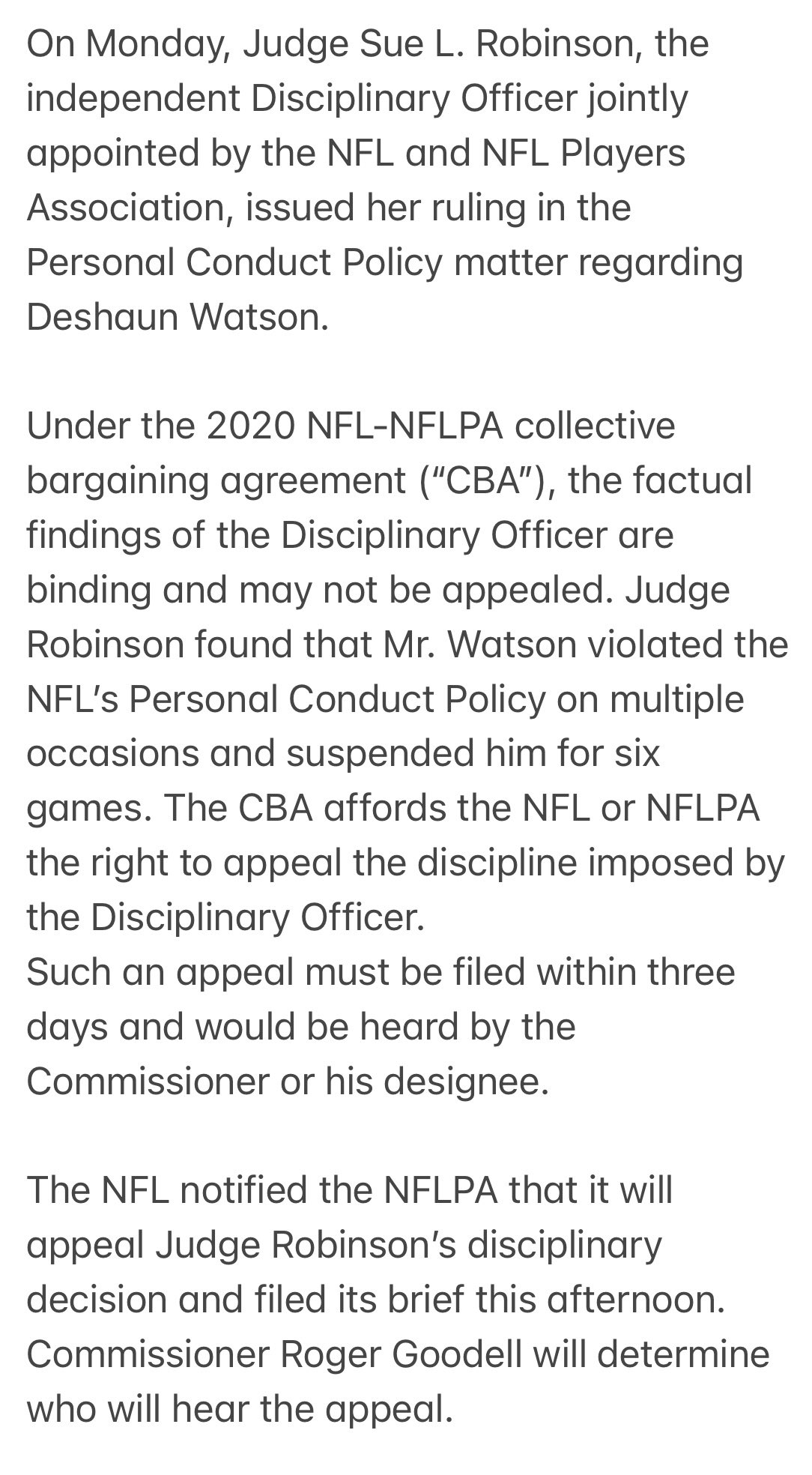 After the maximum 3 days, too. Looks like they looked at what the public reaction was and decided an appeal would be less damaging to the brand than letting it stand. At this point, I have no faith in the idea they’re remotely interested in the right thing, but if public opinion sways them in that direction, I’ll take it.