Just throwing this out there for discussion (an excellent Atlantic article): 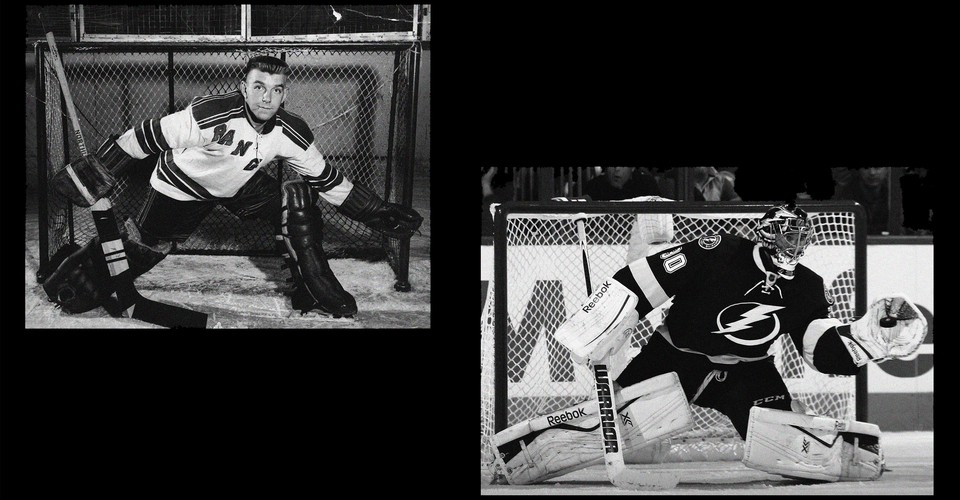 Hockey Has a Gigantic-Goalie Problem

Never before in the NHL’s history has a tail so wagged the dog.

I don’t watch hockey but I really enjoyed this article. Thanks!

Then there’s soccer (football). Makes you sometimes wonder why there’s a keeper at all.

Difficult to change the goal size because then all those small local teams and facilities will suddenly have the wrong equipment. So there has to be more regulation about the equipment. they could certainly create regulations about how far padding extends beyond the outside of a player’s body.

Then there’s soccer (football). Makes you sometimes wonder why there’s a keeper at all.

Not sure what you mean by this.

Great article. As I was reading I was wondering who wrote it, because I hadn’t noticed at the beginning. None other than Ken Dryden – Hockey Hall of Famer, multiple Stanley Cup winner, five-time Vezina trophy winner, #25 in the top 100 hockey players of all time. He probably knows the game pretty well! Remarkably, he was also a federal Member of Parliament and cabinet minister.

I’m the wrong person to ask. I think there should be goalies in golf.

Not sure what you mean by this.

I don’t know enough about the stats about shots on goal vs scores made to evaluate @Keith1’s contention.

As a fan I’m only familiar with the modern game but I don’t have much of a problem with the goalie situation. If it had resulted in a downswing in scoring I would agree that it’s become problematic but as the author says it hasn’t.
But it has changed the way teams have to score. And I find those changes to be some of the more interesting parts of the game. Rushing the net and trying to score off rebounds, lightning fast snipes, more passing across the front of the goal, blocking the goalies line of sight, deflecting shots into the goal, etc.
And maybe goals off the rush and goals outside 20 feet are down, but that doesn’t mean they are non-existent. It just make the goal that much sweeter when they do occur.
Also, I think the statement “if the goalie can see it, he can stop it” is a bit overblown. If that was true nobody would ever be able to score in a shootout.

One would think that lower scoring in soccer would indicate just how important the goalie is (as without, it would be painfully easy to score).

I kind of like the comparison between soccer and hockey and I think it supports the article. If soccer didn’t have a goalie at all, you could just lob it up over the defense. The presence of the goalie effectively takes that away. If on the other hand you have some great ball movement and free up a player one-on-one, the player has a major advantage.
I think the article is saying that good play that frees up a player one-on-one should be rewarded more in hockey.
It’s not apples to apples but it looks like the best shoot-out goal percentages in hockey are around 50% with one outlier at 80% on 10 shots. It looks like soccer averages around 75%

I think the article is saying that good play that frees up a player one-on-one should be rewarded more in hockey.

I agree with that. Give the benefit to the forward or defenseman who is able to get one on one with the goalie.

In soccer, it depends heavily on the angle. A shooter who is 1-on-1 against a goalie and attacking directly from the front will have an excellent chance of scoring, because the goal is an enormously wide target relative to the goalie’s body, and is presented to the shooter as a wide target.

But from a side/oblique angle, the goal is suddenly a far narrower target, and much easier a shot for the keeper to stop.

Save percentages have been on a slight downward trend for the past few years [from an all-time high of .915 five years ago down to .910 last year, and .905 this year early on], but yeah I’d love to see something like the 80’s again, if just for a few seasons. Part of it tho is defense; all defenders not just defensemen are much more disciplined than they used to be. This will show up in the save %, so it isn’t just all the goalies that have driven that number up.

Yes that’s what I meant. Especially on penalty kicks. The poor goal keeper doesn’t stand much of a chance and often just guesses at which way the ball will come.

Yes that’s what I meant. Especially on penalty kicks. The poor goal keeper doesn’t stand much of a chance and often just guesses at which way the ball will com

If the soccer cage is so large and easy to score on why is 1-0 a blow-out score for a soccer game?

None other than Ken Dryden – Hockey Hall of Famer, multiple Stanley Cup winner, five-time Vezina trophy winner, #25 in the top 100 hockey players of all time.

My favorite fact about Dryden is that he won the Conn Smythe trophy, the award for most valuable player in the Stanley Cup playoffs, then the next year he won the Calder Trophy for rookie of the year.
He was called up late in 1971 and only started six regular season games after the starter was injured. Then he started every game in the Stanley Cup, which Montreal won. He was named MVP of the playoffs.
Since he only played in a handful of regular season games at the end of 1971, he was still considered to be a rookie for the following season. Thus he won the rookie of the year the season after leading the team to the championship.

Great read, I played competitive hockey as a kid and played as a goalie. The front of you was protected but the back and side not so much. Sometimes gear would move out of place with sudden movements to block shots, every injury was a learning lesson - guess I have to tape my chest guard into place now.

Just a quick look at the Premiership, the top goalies have a save percentage of 70-80%. Sure, it’s not the 90s of NHL, but it’s far from the goalies merely being decorative.

If there wasn’t a goalkeeper in (association) football there would be 10 times the attempts and about a 95%success rate, routinely double digit scores on both sides.

That was a wonderful article. Thank you. Beautifully written, as well.

It confirmed something I thought I was imagining. I watched a lot of hockey during the Islanders dynasty (early ‘80s), and “shots on goal” were identifiably shots taken at the goal, most of which were blocked by the goalie. I could see what was going on.

When I’ve seen hockey more recently, goals generally seem to be preceded by a big random pile-up at the net, and sometimes the puck winds up inside the net somehow. Much less satisfying. Similar pile-ups did happen back in the ‘80s, but not nearly as often.

The passing game is still great to watch. The scoring game, not so much.

With regard to soccer’s “ little goalie in a great big net:” that situation leads to incredible feats of athleticism, both mental and physical. Seeing a soccer goalie leap or dive and snatch the ball from someplace it has no apparent right to be is really something to see.

ETA: Making the net bigger in hockey really might help. Ken dryden suggests the change be limited to only upper-level play, so that would limit the need for equipment changes. Arent net heights different for different types of basketball? (Though net height is more easily adjusted)