Non-Asian dopers, what do you think of Indian song and dance scenes

When hero and heroine starts running around trees singing.

I can do without the “raining and running around in trees wet t-shirt style” song, but I LOVE the big production numbers where both of them suddenly acquire troops of backup dancers.

I have mixed feelings. On one hand I find it to be rather ridiculous. On the other hand some of those tunes are pretty good and I’m impressed by the choreography and the effort they put into putting on a good show.

I like it. One of my favorite movies is Lagaan. It wouldn’t be the same without the singing and dancing.

I’ve never seen a Bollywood movie per se, but at the end of Slumdog Millionaire, right before the credits, I said to my wife “this movie needs a big Bollywood dance number”, and bam, that’s what happened next, and it was fantastic.

I’ve never seen a Bollywood movie per se, but at the end of Slumdog Millionaire, right before the credits, I said to my wife “this movie needs a big Bollywood dance number”, and bam, that’s what happened next, and it was fantastic.

How can such a sappy happy ending, work without a group dance?

My understanding is that song & dance scenes are pretty much expected in a Bollywood film. They’re not limited to “musicals”; they’re in nearly every movie. Or perhaps every Bollywood film is a “musical” by default. OTOH, I’m not a Bollywood aficionado, so I’m just going by what I’ve been told.

Obligatory The Guild “Game On” link: 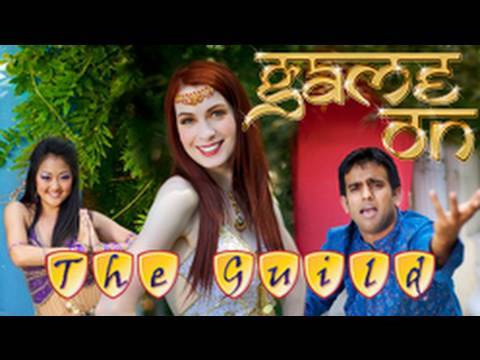 I think they’re pretty ridiculous, but I also acknowledge that I am neither their target audience nor a fan of any kind of musicals.

I think this one pretty much sums it up. Enjoy!

For another thing, all the ones I’ve seen are all movies in one! You get your romance, you get your comedy, you get your drama, you get your musical - Indian audiences evidently expect a lot of bang for their moviegoing buck.

What do I “think” of them?? Some are fun to watch. Most are pretty darned hilarious, is what I think. I’ve seen a few that seem to use tourists, who were just passing through, to be hang around in the background watching the singing and dancing.

For another thing, all the ones I’ve seen are all movies in one! You get your romance, you get your comedy, you get your drama, you get your musical - Indian audiences evidently expect a lot of bang for their moviegoing buck.

Put me down as another Bollywood fan who doesn’t think the “movie musical” format is particularly weird or bizarre, especially compared to the Hollywood movie musicals that inspired it.

The over-the-top exuberance of the love songs also helps set a romantic mood in the context of a movie genre that until quite recently did not permit lots of “real-life” demonstrations of physical or sexual affection between unmarried couples. The fantasy-sequence-type song and dance duet allowed the hero and heroine to do all the sensuous embracing and rolling around in each other’s arms that would have been somewhat too daring for their characters to indulge in within the movie’s actual plot.

I love them. But then I’m in the “Bring back Buzz Berkeley” club.

(If there’s a word for “Club” that starts with “b”, I"m going to think of it at 3:00am tomorrow and give myself SUCH a dopeslap!)

I like old Hollywood musicals. “Who Will Buy” from Oliver! where all of downtown London magically acquires choreography is one of my favorite movie scenes ever.

So, I rather like the bollywood musical numbers where suddenly there’s a cast of thousands with multiple levels of backup dancers. I’m not so much a fan of the wet t-shirt numbers. It just strikes me as really odd that the leads can’t kiss, but they can grind into the camera for five minutes straight.

FWIW, I am so caucasian I pretty much glow in the dark

I happened to catch one on TV recently, with my mother and grandmother. Some of our conclussions:
“I’m getting lost, which one is that one?”
“is it bad if I want to smack that guy and root for him at the same time?”
“You know, this is like the movies from when I was young, only in color! Lots of color!” <— from Grandma, of course “And it makes about as much sense as ‘7 brides…’” <— from Mom, mentioning one of Dad’s favorites movies.
“Wait, so how do those clothes work? She’s wearing a piece of folded cloth on top of a tee? The cloth is gorgeous!” <— did I say Grandma is a seamstress?

For some reason it strikes me as hilarious that some of the biggest productions have come to Spain to film small bits. We used to think that people came here to film because it was cheaper than to do it in other places, but these people are coming because we’re photogenic! (I think one of them got some sort of dream sequences filmed in Spain)
The last show I saw in the theater (also with Mom) was Campanades de Boda, Wedding Bells. It’s about a girl from Barcelona who’s getting married to an Indian actor; they met while he was on tour in BCN with a (actually existing) show that did Bollywood numbers in theaters. Catalan family (so they mix Catalan and Spanish) with some relatives who refuse to even acknowledge that Catalan exists, the groom’s family adds two more languages (English and… ?), the cleaner is Romanian, the gf of the father of the bride is French IIRC, the bride’s sister in law is Brazilian… that show was like a UN session with better décor. And of course, with Bollydances!

I change the channel. Just not my taste.

I love Bollywood, and I see them mainly for the musical numbers. I sure don’t watch them for the comedy, which is generally sophomoric.