Obscure College DJ interview with Kurt Cobain is released on the web.

DJ Roberto LoRusso got an interview with Cobain for his college radio station. He played a few snippets on his show and the cassette tape got boxed up and put in storage.

He was certainly not a pro. LoRusso is just a unprepared college kid that got lucky. This interview is from Sept 20, 1991. Kurt is on the verge of stardom. It is just before the Nevermind release on September 24, 1991.

A tabloid wrote an article, includes photos, and some quotes from the interview. They did a nice job providing context for the audio interview.

I’m quite struck by how completely normal Kurt sounds. He’s very patient with this novice journalist and quite candid. No pretense or rock star ego at all. Just a tired dude chasing his dream and starting to realize the reality of the music business is not as wonderful as he imagined.

No surprise that these artists actually get very little money for signing with a major labe. Everybody else gets their cut first. 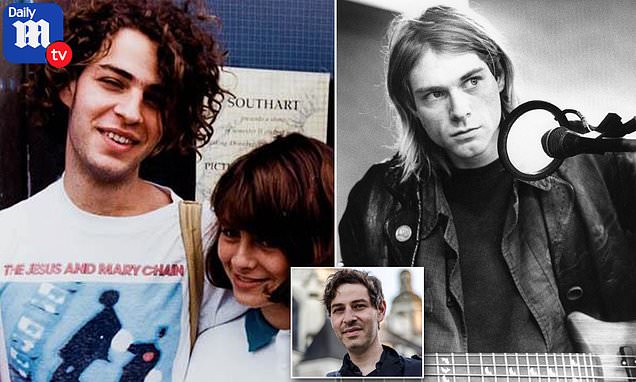 Canadian physics teacher Roberto LoRusso has uncovered his lost interview with Kurt Cobain that has been boxed up for 27 years. LoRusso finally decided to publish it online this month.

In the interview, a weary-sounding Cobain told LoRusso how Nirvana’s new signing with major record label DGC Records only netted the band $20,000, despite a $175,000 payout.

‘We’ve been on tour and we’ve been recording for so long, I got evicted from my apartment about three months ago. Every time we come back we only have a few days at home, so I usually just go to my mother’s. I haven’t found a place to live yet.’

I recall one of the Dope’s regular posters is a former college dj.

I’d love to hear his take on this story and the process of college stations getting celebrity interviews. I’d guess most are phone interviews?

I’m surprised LoRusso got to interview Kurt in person and even scored free tickets to the Toronto show.

Thanks for posting this! My brother was a college DJ for a while in the late 1980s, and after “Nevermind” came out of seemingly nowhere, I asked him if he ever played songs from Nirvana’s first album “Bleach”, and he said that he did - and if a time traveler had visited him and told him that in the fall of 1991, this band would release an album that would hit #1 in almost every nation on earth that keeps track and totally turn popular music on its head, he’d have said they were nuts.

He did a few in-studio interviews with bands that were scheduled to play at bars and other small venues in that area; the two I remember were Bullet Lavolta and the Lemonheads, a few years before they had a couple of minor hits.

p.s. I was not aware that Cobain was capable of giving such a lucid interview. Every time I’ve heard him speak, he was totally wasted.

Hearing Cobain speaking sober is a first for me too.

I guess the really bad substance abuse came later in his career.

Nirvana, or so I’ve heard, played a few gigs at my college before they hit it big. I saw the thread title and wondered if it was my campus station where this happened, but no.

Hearing Cobain speaking sober is a first for me too.

I guess the really bad substance abuse came later in his career.

That was mainly because he could finally afford all the drugs he wanted. I honestly believe that if he hadn’t had musical talent, he would have died a decade sooner, and nobody would remember him.

My friend tried me to get on board with Foo Fighters early, but I told him Sweet 75 was more likely to be huge. I mean, Foo Fighters was only the drummer, but Sweet 75 had the person who really helped write all of Nirvana’s songs!

I gotta disagree. Grohl and Novoselic are outstanding musicians, and Grohl has proven to be a brilliant singer-songwriter in the ensuing years.

But no one else could’ve written the material Cobain did. Or sung it as well. Being an asshole with a heroin habit might have been *required *to do that.

My friend tried me to get on board with Foo Fighters early, but I told him Sweet 75 was more likely to be huge. I mean, Foo Fighters was only the drummer, but Sweet 75 had the person who really helped write all of Nirvana’s songs!

Love them both, and they are far from the only bands I’ve come to know because of Kurt Cobain and his impact.