Oddest song controversies that you can remember.

It seems like every couple years the public decides to get butt hurt over a song. As if 3 minutes of escapist entertainment somehow threatens their values or political positions in life.

How many can we recall? Any genre of music.

I’ll start with one from my junior high school days. Paul Anka’s *Having My Baby. * A rather innocuous pop song that express the excitement and joy of becoming a father. I’ve experienced that joy myself twice and it is one of the best memories of my life. Both times I wanted to shout it from the tallest building, I’m Going to Be a Dad! It might not have been quite the same if it was child #7.

But it is a wonderful moment in a man and woman’s life.

Unfortunately it came out in the mid 70’s. For some reason people took it as a challenge to the feminist movement. Why? Because he said My Baby instead of Our Baby. :rolleyes: As if this was a political OP Ed piece instead of a pop song. You’ll have to read this for yourself. Theres also a reference to abortion, you could have swept it from your life. Yeah, that’s so outrageous. :dubious:

I’ve performed (by request) this song a few times over the years for friends that were expecting their first child. It’s a fun song to sing and has always gotten a good reception.

Your turn, name a controversial song you recall.

I think it was pretty tepid and inconsequential as controversies go, but when the Stones released “It’s All Over Now” the lyric “Spent all my money playin’ her half-fast game” generated some discussion. Some people felt that Mick was singing “half-assed game.”

In fact, Mick sang the original lyric: “Spent all my money playin’ her high-class game.” I never believed this until I heard the song on the 2002 SACD.

^ Just to bolster your OP:

When HMB was popular, I was in 9th grade (junior high, then). When the lone female (feminist) guidance counsellor came down the hall, my guitar teacher would grab a git-fiddle off the wall and chase her down the hall singing that song as loud as he could. She, of course, would scream bloody blue murder back at him. You could hear this transpiring over better than half the school. This happened many times until the song dropped off the charts. Always good for a laugh.

Some folks charged that the Eurythmics 'Sex Crime’was about rape and other bad things. That resulted in a boycott by the radio & MTV in the US and the single did not do well despite charting well in the UK.

The song was actually about “Sex Crime” in context of the movie/book “1984”. Sex Crime in there is actually having sex for any reason other than procreation as your party duty.

Googling, I discovered Cory Monteith on Glee did a version of Having My Baby. So maybe the old controversies have died down. I’ve always liked the song. I relate strongly to the joy it expresses.

Conway Twitty did several suggestive songs that some radio stations wouldn’t play. Slow Hand and You’ve Never Been This Far Before are two I recall. They still went to #1. I still listen to Conway Twitty.

Surfin’ Bird: a local radio station refused to play it, simply because they thought the lyrics were annoying.

I remember when the word “crap” was bleeped out of Kodachrome, by Paul Simon.

Randy Newman’s Short People seemed to get some little folks upset in the late 1970s.

“Louie, Louie,” by the Kingsmen. Investigated for obscenity by the FBI, who finally concluded they couldn’t understand what he was singing, either. 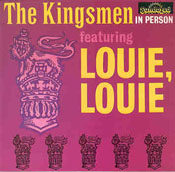 We've all been there. You're at a party, a bit liquored-up and dancing like a loon. Then "Louie Louie" starts to play and, suddenly, you're one of the Kingsmen. You're howling the lyrics when, during

“Louie, Louie,” by the Kingsmen. Investigated for obscenity by the FBI, who finally concluded they couldn’t understand what he was singing, either.

Unlike Johnny Paycheck’s* Take This Job and Shove It*. Those lyrics are easily understood.

The Rolling Stones’ “Let’s Spend the Night Together.” A minor controversy, when the Stones performed it on the Ed Sullivan Show, Sullivan made them change the lyrics so they changed it to “Let’s Spend Some Time Together.”

Billy Joel’s “Only the Good Die Young” which was inspired by a Catholic girl Joel was in love with. In the song he’s pressuring Virginia to have sex with him with lines like “You Catholic girls start much too late” and “That stained glass curtain you’re hiding behind never lets in the sun.” Several archdioceses put pressure on radio stations not to play the song. He received death threats when he played the song in St. Louis and was advised against playing it on SNL. Joel explained the song wasn’t anti-Catholic so much as it was pro-lust and he points out that the girl never agreed to sleep with him and kept her virginity. The controversy has long since blown over and the song remains a staple of classic rock radio.

Wasn’t there some notion that Puff the Magic Dragon was not about any reptilian creature of old, but drug use?

At the height of the PMRC brouhaha, Frank Zappa’s Jazz from Hell album received a “Parental Advisory: Explicit Lyrics” sticker despite being entirely instrumental.

You think “Puff” made waves?
Try “Lucy in the Sky with Diamonds” (for the young-un’s: take the capitalized letters).

These memories intrigue me, because. . .

I was working at a radio station when “Having My Baby” came out. Our station manager pulled it off the air. To the best of my knowledge, no one had complained about it – it was the manager who objected to it.

The stations I worked at also pulled “Take This Job and Shove It” (the owner’s wife objected to it); “Only the Good Die Young” (the Catholic priest in town objected, and the Protestant ministers backed him up); a Rod Stewart song called “The Killing of Georgie” (gay kid gets murdered); Loretta Lynn’s “The Pill” (the wife can finally get back at her cheatin’ husband); something by Pink Floyd that I can’t remember the title right now; and several other songs where trying to excise the offensive words or lines butchered the song so badly we gave up trying.

And while my station did play “Short People” my wife despised that song and complained about it to me all the time it was on the charts.

You think “Puff” made waves?
Try “Lucy in the Sky with Diamonds” (for the young-un’s: take the capitalized letters).

At the height of the PMRC brouhaha, Frank Zappa’s Jazz from Hell album received a “Parental Advisory: Explicit Lyrics” sticker despite being entirely instrumental.

That’s because one of the songs was called “G Spot Tornado”. :smack:

In the mid 1990s, one of the guys in the Christian band Stryper put out a solo record, and the single and video were about abstaining from sex outside marriage. MTV declined to show it, and one commentator said, “He could have been singing, ‘Hi, I’m the devil, let’s go have sex’ and MTV would not have played it, because it’s a terrible song, it’s a terrible video, and it’s not the kind of music MTV is playing right now.”

Wasn’t there some notion that Puff the Magic Dragon was not about any reptilian creature of old, but drug use?

These memories intrigue me, because. . .

I was working at a radio station when “Having My Baby” came out. Our station manager pulled it off the air. To the best of my knowledge, no one had complained about it – it was the manager who objected to it.

Are you sure he didn’t do it because the song is a saccharine glurge-bomb?

They’re Coming to Take Me Away by Napoleon XIV (Jerry Samuels) climbed to number 3 on the Top 40 charts in 1966 and then radio programmers, pressured by advocates for the mentally ill, decided to pull it from the air.

I remember that Sting’s song Desert Rose was pulled from the radio right after 9/11. Stupidest, most trivial thing I can remember about the time. I mean, really?