Oh My God! Norman Bates in our own little town! 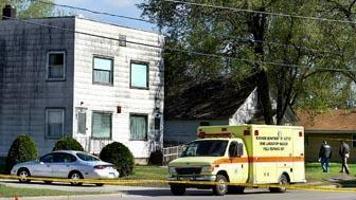 What is it with you people in Wisconsin? Ed Gein, Jeffrey Dahmer, and now this guy. From now on I check any cheese I buy really carefully to see if it has any odd contaminants in it.

Schuth hadn’t worked in 30 years. He lived with mom the whole time. Somebody remembers her walking him to school everyday (throughout high school!) and that he got teased about that.

Schuth was such a recluse that a number of people thought his house (actually her house) was abandoned. That’s what started it, the kid down the street was playing in the Schuth’s backyard because he thought no one lived there. Schuth came out, whacked the kid upside the head and took his bicycle. The parents came over to discuss it, and Schuth shot at the dad with a 22 pistol. All hell broke loose, and he told the police his mom was in the freezer.

Nobody thinks Schuth killed his mom, just that he kept her after she died. She was pretty frail & ancient the last time anyone saw her, which was about two years ago. They thought she’d subsequently gone to a nursing home.
Must be something in the water. Or the milk.

Must be something in the water. Or the milk.

What is WRONG with some people?