Ohio school was a scam to help football players

COLUMBUS, Ohio (AP) — An Ohio school whose legitimacy was scrutinized after its supposedly top-tier football team got clobbered in an ESPN-televised game didn't live up to its billing educationally either: It turned out to be “a scam," according to...

In a call with a department official last month, Bishop Sycamore administrator Andre Peterson characterized his program as a way to get more exposure for football players who were having trouble getting into colleges, according to the ODE report.

Are you fucking kidding me? Some people have seriously fuktup priorities.

It’s not the first one either. The same thing happened a few years ago.

Edit: Ah, it was the same people, they just changed the name of their “school” after they got caught.

Wow! Thanks; this is a helluva story.

I’ve heard that a lot of Texas high schools are basically football teams that happen to have classrooms.

They likely got the idea from Japan’s non-stop coverage of that country’s completely screwed up high school baseball championships.

Here’s a highlight reel of the game in question where Bishop Sycamore lost 0-58, with the ESPN play calls. At one point the announcers admit they couldn’t verify that the school had the division 1 prospects they claimed they did. 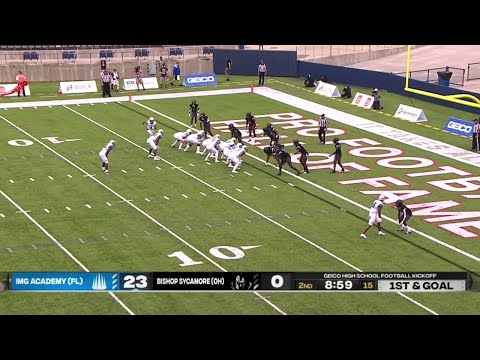 Bishop Sycamore administrator Andre Peterson characterized his program as a way to get more exposure for football players who were having trouble getting into colleges, according to the ODE report.

How does getting your ass kicked on television help you get in to college?

A fake school existed only as a vehicle for playing high school football.

A fake school existed only because some scammers took money from parents, telling them that their failing kids could legally play high school football without actually going to school, and they convinced the parents by lying about the supposed skills their failed kids had.

It’s lucky that they were faking their skills in a non-contact sport. It seemed that they fell over more than they were tackled. And they didn’t tackle anyone.

I can see the parents getting suckered (they all believe that little Johnny is a 5-star prospect), but how did they get ESPN to air the game (and/or get IMG Academy to agree to play them)? I realize rating high school programs is even more of a mess then ranking college ones, but ESPN claims to be good at this sports thing.

It was just a mess of red flags all over the place.

There was the game itself, which wasn’t, as billed, a game between 2 powerhouse teams. They tried to use bad checks at the hotel they stayed at. And then it turned out the team had just played a game 2 days earlier (!) against a different team.

Every time anybody dug just a couple inches deeper, the worse it got. Terrible all around.

As for ESPN, they’ve cut so much staff that it’s not a shock they don’t dig into high school teams. And, to be fair, both teams were part of leagues that, in theory, should have flagged this sort of thing. Of course, another one of those red flags was that Bishop Sycamore, despite being “located” in Canton, wasn’t a member of any Ohio high school leagues but some off brand league of Texas christian schools who, as it turned out, let pretty much anybody in if they had a check and a pulse (and maybe not even the pulse).

ESPN has been covering some high school football for nearly 20 years.

I was Hawaii a couple of weeks ago. They were broadcasting high school games. (playoffs and title games)

I was Hawaii a couple of weeks ago.

But you got better?

Bigger. I am now California.

If you intend getting bigger I suggest you skip right past Texas and got directly to Alaska-sized.