OK, so who's the idiot who designed the unit circle to NOT be in accord with compass directions?

Student of mine tonight trying to learn vectors. As we did her lesson and tried to translate the points given into their correct directions (angles), it struck me: the unit circle has north to the right, not to the top, and the other compass directions are back-assward on top of that.

Now, what idiot would do such a thing? If you are taking a course on navigation you would have to relearn all the particulars (quadrants, sign rules, etc.). Was the real world way that we navigate simply not considered, at all? Since it seems like a series of completely arbitrary choices, seems to me like he could have gone, “Oh, North is zero, so we should put that at the top, E on the right, etc.”

So why didn’t they?

I assume because the real number line was already in use as a horizontal line for functions. Then, of course, higher numbers should be on top so that’s the direction of the positive imaginaries. Once you’ve done that, theta is going to be positive in the counter-clockwise direction.

Blame the Babylonians and their sun-watching habits.
The unit circle and the numbering of the quadrants is meant
to correspond with the apparent motion of the Sun across the sky,
from sunrise (at the eastern horizon) to sunset (at the
western horizon), with quadrants 3 and 4 completing the cycle.

Meanwhile, the motion of the shadow cast by a sundial is
the origin of “clockwise”, as other analog timekeeping devices evolved from sundials.

The latter convention got adopted when deciding how to number the compass headings.

Actually I strongly suspect you can blame Descarte who coordinatized the plane and put the positive x-axis to the right and the positive y-axis pointing north. I really don’t see the problem in learning this.

Can someone explain this to me or point to an illustration? I don’t recall anything about a unit circle having a “north.”

Can someone explain this to me or point to an illustration? I don’t recall anything about a unit circle having a “north.”

In the unit circle used in trigonometry, 0 degrees corresponds to a horizontal line extending to the right, and the degrees are counted counterclockwise, so that 90 degrees is a vertical line extending up, and so on.

It’s true that there is no notion of North, etc. in the unit circle, but it’s natural to equate “up” with North, “right” with East, etc. Or at least to expect that the degrees will increase in the same direction.

The OP is taking it as a given that 0º is north, and that therefore the unit circle (which disagrees with that) must be wrong. But of course, one could just as well argue that obviously 0º is to the right, and that the compass is therefore wrong. Or one could point out that one’s a local coordinate system and the other’s global, so they can still line up (but can’t always line up), as for instance if you’re facing west and looking at a sky chart.

It would be against the AUP to copy enough of this article to explain how North up became the norm over time.

As pointed out above there are mathematical reasons for it to not do so in respect to the unit circle the reasons maps view north as “up” is fairly arbitrary. (outside of the possible north start reference) 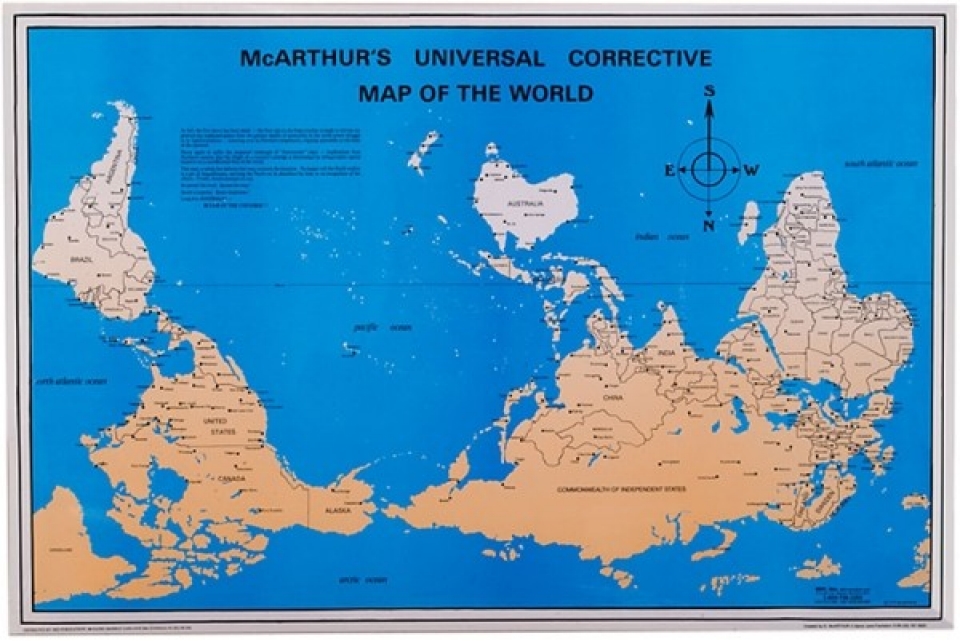 OPINION: How the north ended up on top of the map

A cartographic history of what’s up

If you find cause to , then you can just have 0 at north and have angle increasing clockwise. The common representation of a (0,0) centred circle with the 0 at the right and angle increasing counterclockwise is just a way its commonly shown in the text book … you do not have to just copy that !
If your 3d graphics package happens to provide a function that relies upon that standard, that is simply their mistake. Feel free to make a set of functions/macros that translate magnetic compass compatible directions (eg north =0, clockwise angle ) to use the provided east=0, angle counterclockwise functions…

It’s true that there is no notion of North, etc. in the unit circle, but it’s natural to equate “up” with North, “right” with East, etc. Or at least to expect that the degrees will increase in the same direction.

It is natural to people who have grown up with maps where “North is up”. As recently as the 19th century, military maps were being drawn with South up; until Google maps came along, local maps would often be drawn in whatever position made the area that needed to be drawn fit best within the paper. Barcelona still looks freaky to me when I see it drawn in such a way that Paral.lel is horizontal and Meridiana vertical, as I’m used to this orientation which has the chessboard Eixample drawn so that its streets are parallel to the sides (as are the old large roads and streets such as Major de Grácia or Ramblas), with Paral.lel and Meridiana at angles.

As long as we’re complaining about the compass, what’s this nonsense that NorthNorthEast is 22°30’ ? The ancient Babylonians were thoughtful enough to divide the circle into 360 degrees — 360 is a very composite number — and you couldn’t even arrange to have compass points be integral numbers of degrees? :smack: NorthEast by North is even worse — 33°45’.

This would have been easily avoided by making a compass point 15° instead of 11°15’. The point names would jump from North by NorthEast to NorthEast by North, with no NorthNorthEast in between, but who needs it?

For that matter, even if mariners insist on 32 points, why are the cotangents of North by NorthEast, NorthNorthEast and NorthEast by North equal to 5.02734, 2.41421, 1.49661 respectively? Wouldn’t certain things be simpler if we moved the points ever so slightly to have cotangents of 5, 2.4 and 1.5 exactly?

In addition, what is the deal with these airline peanuts? They’re so hard to open. Who are they trying to keep out of here?

This is why harder core mathematicians use radians, while fighter pilots use “o’clocks” when it’s really urgent to know where the heck’s that bogey

One is about mathematical functions, the other is about location relative to your nose, there is no reason to have a single pattern.

Mr. Mercator distorted more than just our idea of the size of Greenland. North=Top, clockwise=increasing, that’s an artifact of our civilization being in the northern hemisphere so our sundials seemed to move that way as the hours passed.

But it never confused me. In class the trig functions just made so much more sense upon learning the unit circle in both cartesian and polar coordinates. And in actual surface navigation using actual paper maps/charts, you’d put the map down flat and line it up with the compass so you can tell which way you are really facing and what direction are your right and your left.

Well, as you realize, these are all just arbitrary conventions. The math’s the same. “x degrees clockwise from North” is every bit as cromulent a concept to think about as “x degrees counterclockwise from right”, and any time it seems more natural to think about things that way, please do. You should always think in the terms most natural to whatever you’re doing at the moment.

And you can “learn vectors” in full without bothering with any of these conventions.

Accidents of history. If one took the (highly dubious) assumptions that the rotational direction of the angles on a compass rose are intentionally the same as a clock, and that direction comes from the direction the sun runs as viewed from the northern hemisphere. And secondly, that the reason north is chosen as the zero is that the northern hemisphere has the pole star to set the direction by, we could arrive at an alternative history. If only the southern hemisphere had been the first to standardise navigation. Down here the sun appears to rotate the opposite direction (ie counter clockwise in the sky), and absent an equivalent pole start for the south, we would have used the direction of the rising sun as the obvious reference direction. So now the unit circle definitions and the compass rose would have been the same. Easy*.

but it’s natural to equate “up” with North, “right” with East, etc.

It’s only “natural” if you’re a victim of Borealist brainwashing. Free your mind…

Great question. I love things having to do with graphics and symbols that may be viewed as icons depending on user community.

Eg, “What idiot decided music notation should be high-low for frequency at the same time as inconsistent symbols for frequency and left right some durations for some things and not others?”