This is what I have found. I live in Wisconsin. Bars and restaurants wide open. My schools have been virtual since March. Church too. I do very little. Still, cases are skyrocketing because of what other people are doing. We all live together.

Coincidentally, two of my kids’ teachers got Covid anyway, despite virtual schools. They have both recovered.

Schools that opened around here are now closing back up. Hard to have schools open when all your staff are sick.

An Idaho Panhandle campus is closing for the month because too many school...

The Panhandle Health District reported 142 new cases on Wednesday, marking the third day in a row the district has confirmed more than 100 cases.

Idaho's second-largest school district will move to online-only classes after the end of next week because skyrocketing coronavirus cases have forced nearly 1,600 students and staffers into quarantine.

In a move that seems to make a ton of sense. My county is closing all high and middle schools while leaving the elementary schools open. The older kids are both more likely to get sick and more likely to get others sick while also more capable or remote learning than the young kids.

My kids private school isn’t closing for any age group though they don’t do high school but they are requiring all students to get a COVID test 5 days after Thanksgiving and a second one 5 days later is the first is positive. Thanksgiving break is being extended for a week to everyone can get tested and back home for a week prior to going back to school. They are planning to do the same thing after christmas.

Ok, I misunderstood. I don’t think we are substantially disagreeing. I just want to hear the Democrats have an honest conversation about how much risk we are willing to take to open schools. The answer can’t be “none”. We have to accept some amount of risk (by which I, unfortunately, mean some amount of additional cases and death).

A big part of the difficulty of having this conversation is that we still have a hard time quantifying the risk. Much of what we think we know is vague. Young kids appear to be less risk to the community than older kids. How much less?

The risk also isn’t spread evenly. Let’s just pretend that elementary age kids have a 1% chance of catching it at school, and a 20% chance of spreading it to their parents if they do. You might think of that much differently if you’re a 32 year old parent with no risk factors versus a 52 year old parent who is overweight and has asthma. You also might think of it differently if you know you’ll loose your job or income if you have to quarantine because your kid gets sick, or if you’ll be able to work from home and take sick leave.

We have good ideas of the rate of traffic fatalities. Last year the risk factors involved make a decision between driving 1000 miles to Thanksgiving or flying were pretty quantifiable. We just aren’t there yet with Covid-19.

So having a discussion about what amount of risk is acceptable sounds good, and is useful in many instances, but may just be a distraction when we don’t actually know the level of risk. Let’s say we decide it is OK to open schools when kids have a 1% chance of catching Covid-19 at school. When is that?

One of my articles right above is an elementary school being forced to close. Maybe grade schoolers are lower risk, but it didn’t stop this school from running out of teachers that weren’t sick.

I guess I feel like having that discussion is like standing in a blurring house arguing about under what circumstances is it safe to leave the oven on. Right now, the conversation needs to be, given that everything else is open and gatherings are occurring, is it safe to have schools open?

This is what I have found. I live in Wisconsin. Bars and restaurants wide open. My schools have been virtual since March.

But school closings are a local decision made by people who aren’t going to lose their jobs if the schools close. Rules for bars are mostly made by governors, but they surely are influenced by bar owners who point out that they will lose their business (quite possible forever) if they are forced to close.

We don’t have the infrastructure for the government to pay the lease for the bar’s venue. There is nothing the governor can do between killing lots of popular small businesses and leaving them open with regulations that do nearly nothing.

More than 1 million US children diagnosed with COVID-19: report

The American Academy of Pediatrics and the Children's Hospital Association say this number has increased along with outbreaks across the U.S.

“As a pediatrician who has practiced medicine for over three decades, I find this number staggering and tragic,” Sally Goza, the president of the American Academy of Pediatrics, told CNN. “We haven’t seen a virus flash through our communities in this way since before we had vaccines for measles and polio.”

The CDC removed guidance pushing for school reopenings. The guidance still seems murky. They say that the guidance reflected the information at the time and was not updated to reflect that children can become infected and clearly can transmit.

Sorry for the long quote, but I wanted to add the part that notes that the WHO website notes that there have been few outbreaks involving children or schools and that the authors of the article contend that the data increasingly suggests that schools are not hot spots for covid-19 infection.

The article is confusing in tone to me.

The Centers for Disease Control and Prevention (CDC) has quietly removed controversial guidance from its website that pushed for schools to reopen in the fall and downplayed the transmission risks of COVID-19 to children and others.

The Centers for Disease Control and Prevention (CDC) has quietly removed controversial guidance from its website that pushed for schools to reopen in the fall and downplayed the transmission risks of COVID-19 to children and others.

The documents, one of which was reportedly written by political appointees outside of the CDC, stated that children appear to be at lower risk for contracting COVID-19 compared to adults and that children are unlikely to be major spreaders of the virus.
. . .
Michael Beach, the CDC’s deputy incident manager for the COVID-19 response, told Clyburn’s committee in October the guidelines “reflect the data at the time they were posted and have not been updated.”

“It does appear that children can become infected,” Beach said, and “clearly can transmit.”

The CDC’s website now states that “the body of evidence is growing that children of all ages are susceptible to SARS-CoV-2 infection and contrary to early reports might play a role in transmission.”

The website also acknowledges that “teachers and students are in close contact for much of the day, and schools can become a place where respiratory diseases like COVID-19 can quickly spread.”

However, data increasingly suggests schools are not hot spots for COVID-19 infection and while all kids can catch the virus, older children are more likely than younger children to spread it to others.

Still, the World Health Organization notes on its website that few outbreaks involving children or schools have been reported and the “spread of COVID-19 within educational settings may be limited.”

Another good article on the relative safety of in-person teaching. Opinion | Schools are not spreading covid-19. This new data explains why.

An analysis of data from New York shows that stopping community spread — not canceling in-person schooling — is the way to protect students and teachers from covid-19.

Can you summarize? It’s paywalled.

I can. In summary, she screwed up.

She doesn’t actually show her math, but she made the mistake of linking to the data that she uses. I’ll note that she claims to be using four weeks of data, both outside and inside of school to do the comparison. While she might very well do that for outside, for schools her data shows two weeks, at least according to the data itself. Therefore we’re already off to a shaky start. As for the rest, this quote was key to me:

This side-by-side comparison of the New York data focuses on the period between Oct. 12 and Nov. 6. For clarity, I’ve divided all Zip codes in the state — 1,071 total — into six “buckets,” based on the prevalence of covid-19 in those communities. The lowest bucket includes all Zip codes with fewer than three covid cases per 100,000 people; the highest includes Zip codes with 20 or more cases per 100,000 people; the rest are distributed in between.

So we have a baseline known case rate for the general population of 0.0280% for the WORST areas

Using the data that she so helpfully linked to, we get the following data (remember, this appears to be just two weeks worth, so the truth could be twice as bad).

Known student cases of all schools: 936
In-person enrollment (remember, most schools are hybrid, so many kids aren’t in class): 1,329,362

We have a known case rate of 0.0704% which is over twice the rate of the WORST performing bucket in the general population.

Let’s pretend that all students are in school (the data shows total enrollment so why the hell not): 2,422,891 for a case rate of 0.0386%. That is still far larger than the WORST performing bucket in the general population.

Her methods appear flawed in many other ways, but once that schools are performing far worse than the worst hit areas in general, I stopped digging. 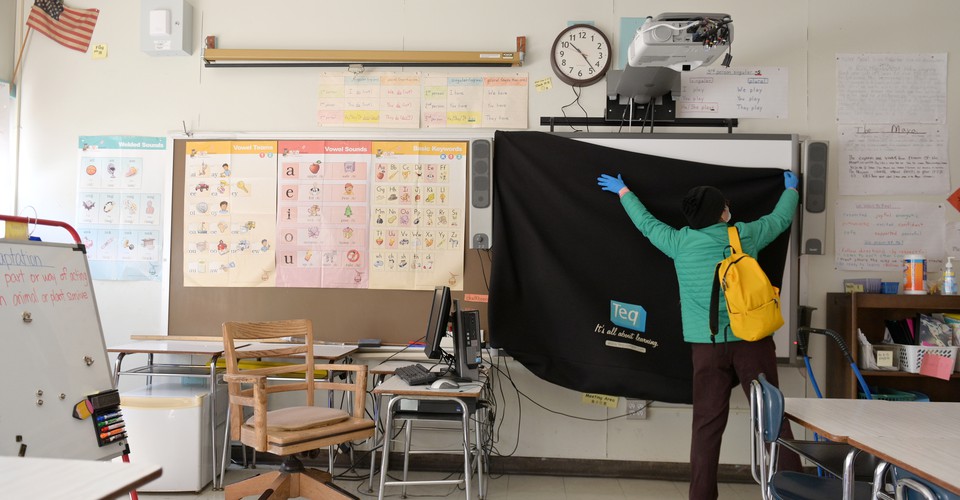 Why Are We Closing Schools?

Keeping kids out of the classroom will make recovering from the pandemic harder in the long term, while not keeping us any safer in the near term.

Since that article appears to use the previously linked article as its primary source, I stopped reading pretty quickly. Did you see a flaw in my analysis of the previous link (which is certainly possible) or are you just going to throw links at us in hopes that we stop responding?

Report from from UNICEF looking at school closings around the world:

“Evidence shows the net benefits of keeping schools open outweigh the negatives.” They cite this paper from Insights for Education when making that statement:

Well, I get the impression I will soon see a few people tell us what a bunch of idiots UNICEF are. Lol.

The Washington Post article is an opinion piece by economist Emily Oster.

There is a lot of original data provided. I don’t know if they provided all of it. I didn’t go through it, and am not about to now. I don’t see anything wrong with dividing into cohorts or type of student or faculty. If there are errors one might communicate them to the NYT or Atlantic, who should be checking the numbers. The claims make sense to me.

Did you see my post at all? I don’t need a summary. I broke down the actual numbers from the data that she uses. Her data shows that it is more dangerous to go to school than it is to be a member of the general population in the areas with the highest community spread. She somehow neglects to mention that in the article.