I had to share this. I love this video.

It’s pretty lovely, in an Ooga-Chaka way; a friend linked to it on FB a few days ago, and I still get a giant grin whenever I think about it.

I think this makes the Korean war worth it.

Ha! Thanks for sharing, loved it.

That was definitely the funniest thing I’ve seen all morning.

Thanks for posting it!

I love the guy. He’s so cocky and confident, and look at him gyrate!

The director should win an award. The scenes are very random, funny, and somehow still fit with the style.

The director should win an award. The scenes are very random, funny, and somehow still fit with the style.

Yeah it was fun making a list of stuff that was going on as the song went on.

I put it out on Twitter that the Indians’ awesome Korean right fielder should change his intro music to that song!

And he doesn’t even stop singing when he’s ON THE TOILET!

215 million + views on youtube, and he has now made the talk show circuit in the states and is rumored to be collaborating with Justin Beiber and Brittany Spears (I can’t say much for his taste in American artists but whatev).

I also heard this today on a popular local radio station here in Memphis which plays top 40 dance music. I was shocked to say the least, to hear a foreign language song, let alone a Korean one on Memphis radio was pretty cool.

**On a side note I think it is amusing when people who aren’t familiar with Kpop are amazed at Psy’s English. Two clicks on Google and you find out he was educated in the states while attending college in California.

The Indians’ right fielder has finally changed his music. Just this week, I think. Surely due to my insistence!

I just saw this video for the first time a few days ago to see what the hype was. It’s quite a catchy song, and amazing how it’s gone viral.

For those that are wondering, it’s apparently actually a really clever, subtle satire of Korean culture, specifically of both the residents of the Gangnam District of Seoul (think Korea’s version of Beverly Hills) and the people who really want to be a part of it without actually knowing what being “Gangnam Style” entails. 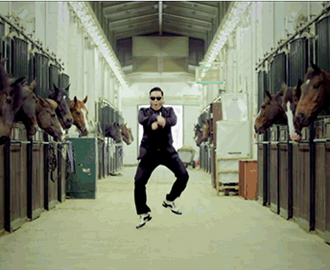 Beneath the catchy dance beat and hilarious scenes of Seoul's poshest neighborhood, there might be a subtle message about wealth, class, and value in South Korean society.

Also, there’s also an official version that’s (vaguely) from the girl at the end’s perspective: http://www.youtube.com/watch?v=wcLNteez3c4&feature=relmfu

And apparently that girl is mimicking a Gangnam accent (think “doing a Valley Girl voice”), and doesn’t normally sound so squeaky.

A dance craze. What joy.

I’m ashamed to say I have no idea how many views I’ve contributed towards the total, but it’s quite a large number. I cannot, apparently, stop watching this.

And now I have some friends who are similarly addicted. Mwa-hahahahaahah!