Answers a lot of questions that I’ve had about the original bunnies. According to the brochure they worked an 8 hour day, $200 a week (early 1960’s), were expected to do community service (for example visiting Veterans Hospitals). Anyone over 25 need not apply for the job. Extra money could be made modeling. The bunnies registered with Playboy Model, Inc. and they acted as their agent. 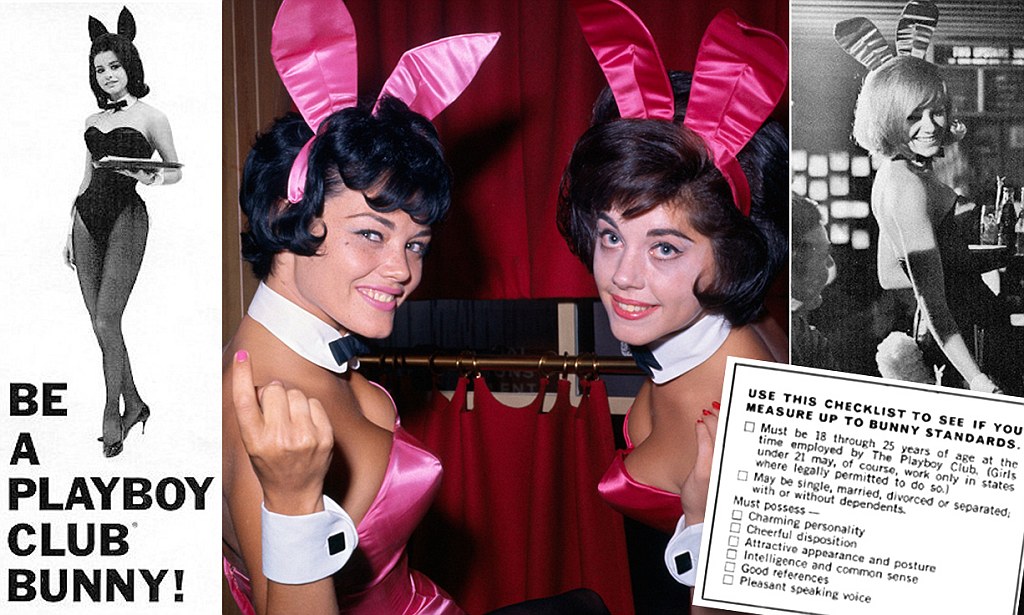 'Custom outfits and you'll earn far more than other girls': The Playboy Club...

Playboy Clubs were exclusive bars, nightclubs and casinos that served food and drink from 11.30am until 'the wee small hours' that began opening in 1960 and thrived from Las Vegas to Tokyo through the 1980s.

A lot of the Playboy Club mystique was their upscale image. I read Jay Leno’s book and he worked the NY Playboy club in the early 70’s. By then he said the food was basic buffet style. The club was a little dingy and dirty. They paid the comics cut rates. It’s not surprising that they closed by 1980.

The bunnies were really just hard working waitresses and hostesses in a skimpy costume. I think it was a lot like working at Hooters today. They get better tips than they would at a regular restaurant. But also spend more time avoiding the customer’s wandering hands.

I think it was a lot like working at Hooters today. They get better tips than they would at a regular restaurant. But also spend more time avoiding the customer’s wandering hands.

I doubt that that happened much at all. The clientele was always very upscale, and it was made clear, both to the bunnies and to the clubs’ guests, that the girls were not permitted to respond to any advances.

That policy continued at the bunnies’ insistence until the mid-70s, when they decided they wanted to be free to respond to men whom they considered attractive and actively campaigned for the rules to be changed.

It’s no surprise that the Playboy clubs had their run and survived longest in places like Cleveland. I can think of few things so widely accepted and admired that were sicker, at core, than the “Playboy philosophy.”

Well it certainly would not be flattering on Jay Leno. Maybe he was a lot slimmer back then.

I think you have to accommodate the different physique of the time. Centerfolds and thus those most representative of the bunny type in the early 1960s would have been considered overweight by today’s standards - grotesquely so, from the extremes. The bunny costume inherently fits better on women with a larger bust and hips and more padding overall, which would make a normal-sized waist seem small.

On an idealized woman today, it would look ridiculous and emphasize any slightest flaw of posture or tummy curve.

In his book The Rape of the APE, Allan Sherman characterized the costuime as not merely unflattering but downright torturing – nipping the waist in so tight that you were close to suffocation, giving the women high heels to wear while pushing the breasts up into that cup shape.

Sherman was a friend of Hefner’s, and went to the clubs, and probably talked with the Bunnies. He knew whereof he spoke.

When it was conceived in the 60’s the planned community of Reston (in North Virginia) was supposed to have a Playboy club on top of the Sheraton tower. Family life-style thinking took over and the club never materialized. However, in anticipation the adjacent golf course was built to resemble the Playboy symbol.

Cute.
I’ve personally seen bunny costumes at the Playboy Club in London and at the Playboy Casino in Atlantic City – both gone now. (Although I note that, after Playboy relinquished ownership, the waitresses stil wore the same “Bunny” outfits – only without the ears and cottontail).
I believe they have Bunny-suited servers at Playboy Las Vegas, and possibly in clubs in the Far East.