PC printer recommendations for my mom

I need to help my mom purchase a printer.
Simple, reliable, and inexpensive.
She’s in her 70s and not the most tech savvy.
Using inexpensive ink, if such a thing exists, is a plus.
I hope to help set it up for her this Christmas.
Any recommendations?

What kind of printing would she be doing with it, and how much? (I assume recommendations would be diferent for someone intending on printing a lot of color photos vs. someone printing black and white text documents.)

She primarily prints financial documents, probably a few a month.

If she doesn’t need color, a small B&W laser printer might be the best bet for “simple, reliable, and inexpensive.”

Beyond that, I personally have no recommendations, but here are a couple of relatively recent threads about printers:

Our HP laserjet 1536dnf printer seems to be dying, and we are in the market for a new one. We need it to: Be a laser printer. not negotiable. photocopy, print, and scan have a document feeder do duplex automatically (two sided printing) fit on our 20"x15" table (the current one has trays that stick out, so maybe it’s closer to 20"x20", but all the weight is on the table) talk to the home network, so all the computers can print on it Nice to have color: Are color laser printers reliable and …

One of the more aggravating things in life: consumer electronic reviews, and printers In My Humble Opinion (IMHO)

Is trying to shop for small appliances and electronics. I’m in the process of trying to replace my printer and it’s just painful to do research on them. It appears that HP printers now have chipped cartridges that will just cease to function when THEY think it’s time. Other printers get some one-star reviews that are blood-curdling in their venom. I just need a multi function that will work with an iMac. Is this too much to ask? I don’t even care if it has color. Easy set-up and functionality sh…

I’ll give an update from my thread, and say that if you do want to go all-out, we are very happy with our shiny new all-in-one color laserjet printer. I haven’t tried faxxing, yet, but I’ve printed, scanned, and photo-copied, and I’m happy both with the quality of the results and with the ease-of-set-up. It’s kind of cool that I can now print an email directly from my phone over the home wifi, for instance.

I agree with the recommendation for a monochrome (i.e., B&W) laser printer. And Brother seems to make ones that are inexpensive and reliable. About a decade ago, I made a point of buying my mother the same model Brother all-in-one printer that I had, so when she had a question, I could walk her through something on mine.

If she doesn’t need color, I third the recommendation for a laser printer. It will definitely be cheaper to run.

If she needs color, I would avoid Epson 2800 series network printers – my sister has one and has had a bear of a time keeping it connected and working. I have had a hard time keeping it working for her – remotely logging into her machine and deleting printer drivers, reinstalling them to get it working – crap like that.

I have an HP network printer and don’t seem to have those issues, but I’m a lot more tech savvy than she is, so maybe I avoid doing stuff that she does. Anyway, avoid the Epson.

Definitely avoid inkjet printers, the ink is ungodly expensive and the printers find all sorts of reasons not to print, like some won’t print black text if they are out of one color of ink. Clogged printheads are another common thing for a printer that isn’t used often.

Another vote for a laser printer, Brother and HP have both been very good for me. 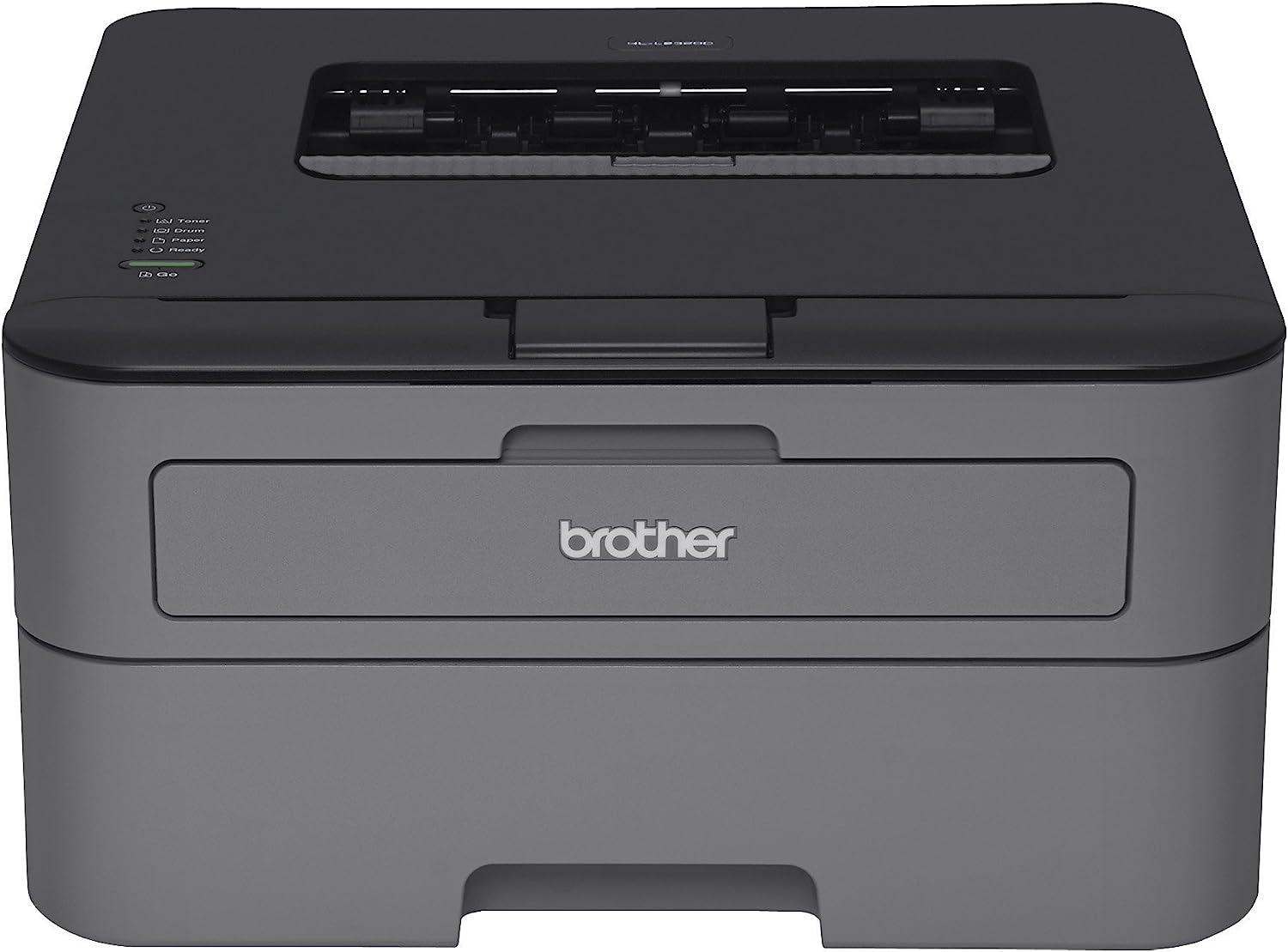 I have the previous version of the printer below and have used it for years without issue. It’s similar to the one linked by @Elmer_J.Fudd, but can handle WiFi connections and slightly faster. 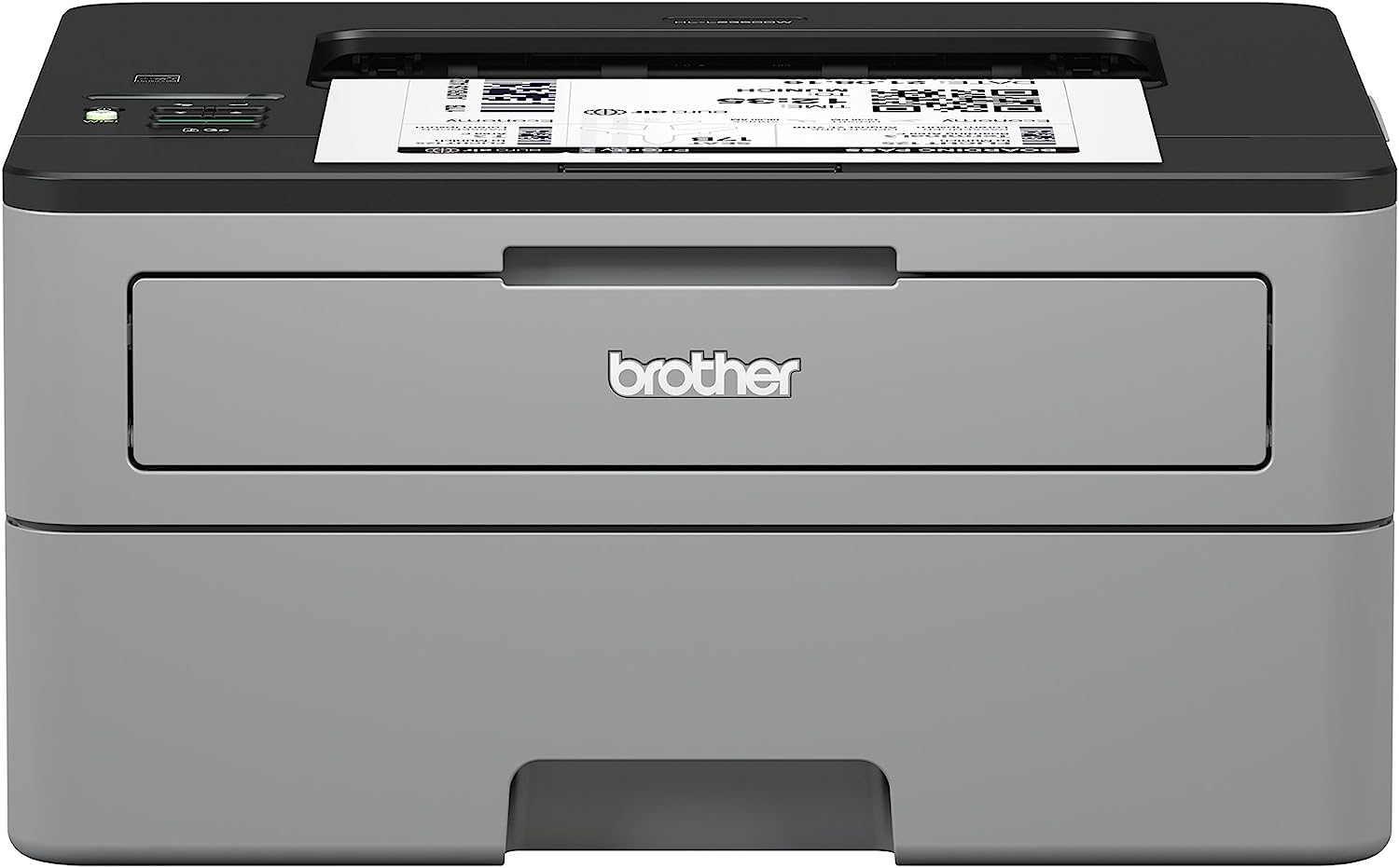 Style:HLL2350DW For those in search of an easy to use home or office label printer, the P touch PTD210 should be on your wish list. The Brother P touch PT D210 makes it easy to create great looking labels for...

I use that very printer. It’s literally 4 inches from my knee at this very moment, in the desk at which I sit.

Awesome, reliable, fast, and cheap to operate and keep fed.

What I like about laser printers is they don’t care if you don’t use them for a long time. The ink doesn’t dry out like on inkjet printers. I had one laser printer for over a decade using the original toner cartridge and only replaced it because it needed a replacement cartridge and I opted to put the money to a newer, faster, higher-resolution printer instead.

Yep. Unless you want to get constant calls along the lines of, “I’m getting white ljnes through my letters” and don’t want to explain how to clean print heads or exchange cartridges, just get a laser printer. They just work.

Before we got the color laser printer, we had a b&w one, and it worked reliably for more than a decade. I think we bought two new cartridges in that time. I, also, endorse laser printers.

We’ve had good luck with HP.

Definitely get a Brother laser printer. I just walked over and mine is a MFC-7860DW printer/fax/scanner/copier. It may be useful to get one with a scanner and copier function.

Do not get a Brother inkjet. They have discovered nagware and when the ink is just starting to run low a message pops up every hour telling, no ordering, you to replace the cartridge. They really think that annoying the hell out of users is a good sales strategy?

@puzzlegal: What is the model of your HP Laserjet? I am getting ready to boot out our Brother.

Do not get a Brother inkjet. They have discovered nagware and when the ink is just starting to run low a message pops up every hour telling, no ordering, you to replace the cartridge. They really think that annoying the hell out of users is a good sales strategy?

Pretty much every printer has nagware these days. Even my Brother laser printer did. It’s trivial to turn it off, just google the solution for model number of the printer. In my case, it starts to send the message after a certain number of sheets printed. I just had to reset the count and my cartridge lasted for a few more months. From Googling the solution to pushing like three buttons on the printer took a couple of minutes.

One of the more aggravating things in life: consumer electronic reviews, and printers In My Humble Opinion (IMHO)

I bought an HP laser jet pro mfp m283fdw. So far, I’m very happy with it. It talks (over the home network) to every device I’ve tried to connect to it, including a MacBook pro, an HP spectre, and my Pixel phone. I’m not looking for photo quality, but it prints pretty colored graphs, and prints PDFs nicely. I haven’t tried scanning anything, yet.

I’m late to the party, but agree that a B&W Laser is the way to go. I had a HP for years, and after I found a sleazy aftermarket toner cartridge, it was even better. After 6-7 years it was still going, but the print quality was degraded a bit (still have it as a backup though) and went with a Brother, which has also done well.

My M and F in-laws have gone through 5 different color printers in that time. Because they have be able to print color photos. IMHO, in that case, the cost for those as a job at a print shop is far less than the cost of the damn printers and ink!

One thing I will strongly, strongly suggest, is see if you can find a final model that does a direct ethernet connection. Wireless is great - but not so much for tech shy individuals. It’s at least quarterly I’ve had to go over to get M/FiL’s printer connected after their computer or the printer dropped off the network or otherwise went nutzoid with connectivity.

Preach it Brother! (so far Brother seems to be winning)

I have a Brother MFC-J805DW printer/scanner/copier (maybe fax too but WTF who faxes?)

The ink that comes with it is enough for a year++ and the refill carts are relatively inexpensive.

For reasons I do not like HP printers at all.