I was canning tomatoes with my wife tonight and wondering about the physics of my pressure canner. I know that the reason for keeping the weight over the vent pipe is to increase the pressure inside the canner. The vapor pressure of the air stays higher than that of the water (to a point) and allows you to heat water beyond its usual maximum temp. For the sake of argument let’s say it allows the water to reach 110 C. Now, say I was to get impatient waiting for the pressure to drop off and I removed the weight. Suddenly the system drops to atmospheric pressure and the fun begins. All of the water either has to dump energy or change state to a gas. Blammo, one dead rat. This doesn’t seem right, but I can’t figure out why not.

ps. I checked the manual and they said not to do it without elaborating as to why not.

Let’s say you have boiling water at atmospheric pressure, at 100C. It takes energy to turn 100C liquid water into 100C steam, even though they have the same temperature, because you need to break apart the bonds which is holding the liquid together.

So now, let’s say you have 110C liquid water in the canner. (I have to admit I’ve never operated or even seen a pressure canner, but it sounds like it’s similar to a pressure cooker) Does it have enough energy to turn into 100C steam? No, it only has energy to turn a small fraction of the water into steam.

So when you open the pressure canner at 110C, some liquid water will turn into steam immediately, but this takes away a lot of heat from the water. Most of the water will cool down to below 100C and stay as liquid.

You might get some water popping out, but more likely just a big ole gout of steam. Since the steam is, literally, boiling hot, you could get burned.

Likely you wouldn’t have too many problems, just a lot of hot air rushing out of the pot, I think. 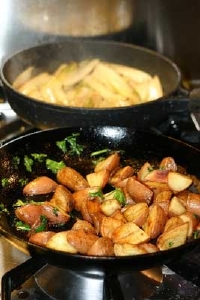 Why do many foods have High Altitude Cooking Instructions?

Most any packaged food that involves boiling (like boxed macaroni-and-cheese dinners) will have "high altitude" cooking instructions. Find out what this means and why it matters in cooking.

FWIW, your water inside the canner isn’t at 100 C, it’s higher (sorry, I’ve been diagnosed as centigrade-challenged, you do the math)

The reason they don’t want you to open the petcock or take the weight off the vent is because it will lower the pressure inside the canner, and therefore lower the water temperature, and therefore possibly not process your food at safe temperatures.

Okay, so it’s 121 C instead of 110 and some energy is lost due to the change of state. Say the water was hot enough while under pressure to allow all of it to change state. Does this mean that open petcock = kaboom?

*Originally posted by LabRat *
Okay, so it’s 121 C instead of 110 and some energy is lost due to the change of state. Say the water was hot enough while under pressure to allow all of it to change state. Does this mean that open petcock = kaboom?

Probably. But heat of vaporization of water is 2257 kJ/kg, while its specific heat is only 4.2 kJ/kg/C. So for liquid water to have enough energy to vaporize itself, it has to be at about 600 degrees C. I don’t think you need to worry about this happening.

My mother had a pressure cooker (not canner) that she used constantly when I was growing up, and the worst thing that happens if you remove the weight while it’s cooking away is you get a huge jet of steam, but not an explosive one. So you could get your face scalded.

And then of course you’ve lost all your pressure, so your pot roast is going to take that much longer to cook.